Until now, any Facebook Page that posted a link could change the headline, body text and image that appeared in the News Feed preview. That allowed fake news distributors to bait-and-switch readers into visiting articles they didn’t expect, or make it look like legitimate news publishers were posting inflammatory or false headlines. But it also let real news outlets A/B test link previews, tailor content to different audiences and update previews as news stories evolved.

To combat false news without stifling responsible publications, Facebook is now starting to disable the ability of all Pages to edit the previews of the links they post in the Page composer or API, with an exemption for some original publishers.

A new tab in Page Publishing Tools for Link Ownership will let those exempted specify the web domain they own, and be authorized by Facebook to modify the previews of links to this domain. All Pages that want exemption must have their link ownership approved by September 12, 2017, when the removal of unauthorized preview editing will be fully rolled out. 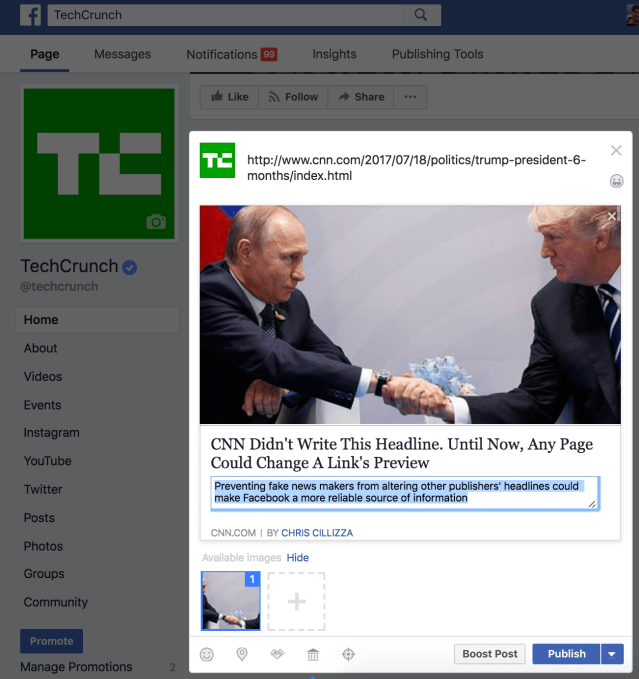 Facebook writes that “We’re first rolling this [Link Ownership] feature out to media publishers, including news, sports and entertainment Pages, because we’ve found that many of these Page types modify links to their own articles at scale.” Webmasters will still be able to change the Open Graph tags on their site and articles and test them with the Open Graph Debugger to configure the default previews for their content.

At F8 in April, Facebook mentioned a change to link preview modification would come to the API, but didn’t have a solution for the many Pages that rely on changing their link previews to optimize their content.

The change could allow Facebook to dismantle some of the infrastructure that allows the mass distribution of fake news without having to make judgement calls about each piece of content individually. Methods like this and the many recent News Feed algorithm changes Facebook has made allow it to promote the truth without having to police the lies directly. That strategy could prevent it from drawing criticism for favoring one side of the political spectrum over another.