IBM’s Watson unit is receiving heat today in the form of a scathing equity research report from Jefferies’ James Kisner. The group believes that IBM’s investment into Watson will struggle to return value to shareholders. In recent years, IBM has increasingly leaned on Watson as one of its core growth units — a unit that sits as a proxy for projecting IBM’s future value.

In the early days, IBM’s competitive advantage was its longstanding relationships with Fortune 500 companies. IBM Watson effectively operates as a consultancy where the company engages in high-value contracts with corporates to implement Watson technology for specific business cases. Unfortunately, IBM is struggling to bridge the gap between client needs and its own technological capability.

Jefferies pulls from an audit of a partnership between IBM Watson and MD Anderson as a case study for IBM’s broader problems scaling Watson. MD Anderson cut its ties with IBM after wasting $60 million on a Watson project that was ultimately deemed, “not ready for human investigational or clinical use.”

The MD Anderson nightmare doesn’t stand on its own. I regularly hear from startup founders in the AI space that their own financial services and biotech clients have had similar experiences working with IBM.

The narrative isn’t the product of any single malfunction, but rather the result of overhyped marketing, deficiencies in operating with deep learning and GPUs and intensive data preparation demands. 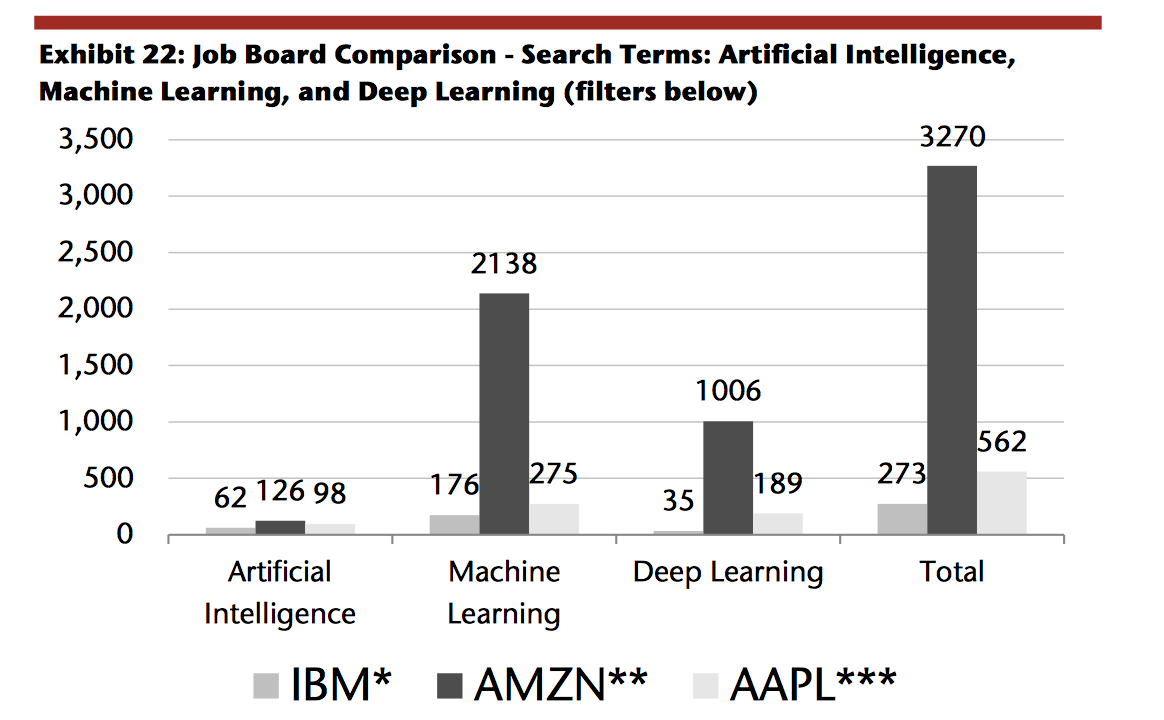 If job postings are any indication, IBM is not keeping pace with other technology companies in hiring machine learning developers. Things seem particularly lifeless in the field of deep learning, where IBM’s hiring appears anemic with respect to Apple and Amazon — and let’s be real, things would look much worse if Google, Microsoft and Facebook were added to this table.

The information provided in Jefferies’ report isn’t new nor groundbreaking, but it’s a strong signal that Wall Street is beginning to pay more close attention to the challenges facing IBM Watson. I’ve listened to my fair share of IBM earnings calls and it’s clear the market has been focusing too heavily on short-run growth and not enough on long-term technological or strategic sustainability.

It seems perfectly reasonable that IBM shot out of the gates like a rocket in a mostly sterile AI market selling to CTOs and newly minted chief data officers with just enough anxiety to open check books. But the reality is that AI isn’t an amorphous black hole that sucks in unstructured data to produce insights. A solid data pipeline and a domain-specific understanding of the AI business problem at hand is table minimum.

Coasting on early success won’t cut it in today’s AI-first world where machine learning platforms are a dime a dozen and tech giants like Google and Amazon are throwing billions into their respective cloud ecosystems.