Bumble just launched a new feature designed to let you tell a match you’re really into them.

Available now, SuperSwipe is a button that signals to a potential match that you want to match before they even swipe on you. Traditionally someone has to wait until they swipe left or right on you to find out you’re also into them.

Here’s how it works: On each potential match’s profile there will be a small heart button that will initiate a SuperSwipe when tapped. Then when your profile comes across the screen of the user that you SuperSwiped, they’ll see a small icon indicating you made that first move.

The feature is similar to Tinder’s Super Like button, which it launched in late 2015. At the time Tinder said that conversations initiated with a Super Like lasted an average of 70 percent longer than other conversations.

A Super Like or SuperSwipe feature makes sense for any dating platform – if you’ve ever used a dating app, you know there’s something special about knowing someone is already into you. You’re probably more likely to swipe right on them, and of course it just feels good to be wanted. 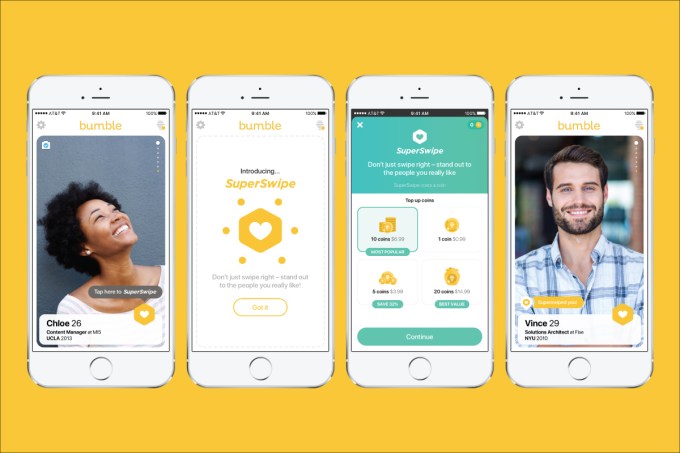 To be clear, Bumble will already tell you who has swiped right on you if you pay for their premium service. But knowing someone swiped right on you definitely doesn’t carry the same weight that a SuperSwipe will – especially since each one costs almost a dollar.

To let users pay for this new feature, Bumble is launching Bumble Coins. Priced at $0.99 each with a discount for buying in bulk, these coins will become the official in-app currency to pay for SuperSwipes, as well as additional paid features that the dating app will be launching before the end of the year. One of these (yet to be announced) paid features will let you skip ahead in someone’s queue of suitors, so they see you sooner.

Bumble launching a dedicated in-app currency is a strong sign they are preparing to take monetization more seriously. If future features are all priced at a dollar and similarly addicting, features like SuperSwipe can quickly add up to potentially become a serious source of revenue for Bumble.