What do you do after garnering tens of millions of downloads and scores of clones of your AI-powered style transfer app? Why, keep innovating of course.

Meet Sticky, the next app from the startup behind Prisma, which turns selfies into stylized and/or animated stickers for sharing to your social feeds. Sticky is launching today on iOS, with an Android version due in a week or two.

While Prisma gained viral popularity last year, netting its Moscow-based makers around 70 million downloads in a matter of months, its core feature has been rapidly and widely copied — including by social goliaths like Facebook.

The team’s response to having their USP eaten alive by others’ algorithms was to evolve their cool tool into a platform. But with the social app space essentially sewn up (at least in the West) by Facebook, which also owns Instagram and WhatsApp, building momentum and making a lasting impression as a new platform is clearly not an easy task.

Co-founder Aram Airapetyan tells us Prisma’s audience has been “very stable for the last six months” — shaking out to “around 10 million monthly active users”.

That’s not bad for a ~one-year-old app. But, well, Facebook has two billion monthly users at this point… (And that’s before you factor in all the Instagram and WhatsApp users.) So it’s hardly a fair fight.

Sticky’s core tech is an auto cut-out feature that quickly extracts your selfie from whatever background you snapped against so that it can be repurposed into sharable social currency as a standalone sticker. 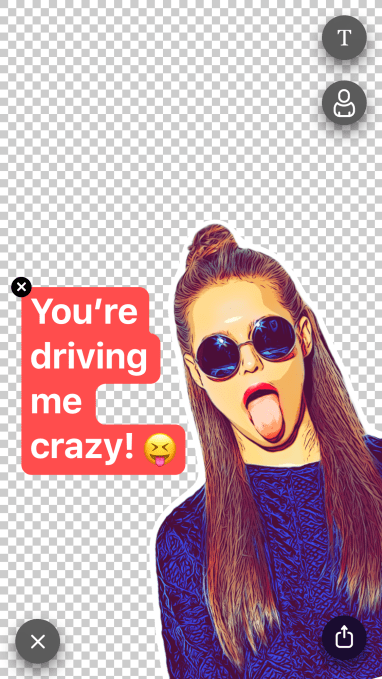 The app lets you leave your cut-out selfie without any background, or edit the background lightly — by tapping through a few full-fill colors options — to make the sticker a bit more visually impactful. You can also add a white border around your selfie for extra stickerish delineation.

Airapetyan says more options are planned on the background front in future — including the ability to superimpose selfie stickers over photos of your choice.

It’s fair to say that, at this MVP stage, the cut-out feature is by no means perfect. It can get very confused by hair, for instance. And certain (high or low) lightning conditions can easily result in bits of your cheek going missing. But with a bit of trial and error you can get a reasonable result — and without having to spend much time on it.

Also worth noting: all processing is done locally on the device, according to Airapetyan.

From here, Sticky shows its Prisma pedigree — as you can tap on your cut-out selfie to apply a Prisma-ish style transfer effect (the version I tested had two style options, a black and white and a color style, but the plan is to add lots more “cool comic and cartoon-like styles”, says Airapetyan).

You can further augment your sticker by adding a text caption too, if you wish.

When you’re happy with your creation you can save it or share to your social feeds — although at this stage stickers generally share as a picture, rather than a sticker format (but the team is hoping to get support for that — and says Telegram and WeChat are “working to provide APIs”).

Saved stickers are stored as an ongoing, editable collection within the app.

As well as still selfies, Sticky also lets you create animated stickers. To do this, instead of tapping once to snap a selfie you hold down on the camera button while pulling your silly face (or what not) — and the app snaps multiple frames and processes these into an animation.

Animated Sticky stickers are displayed in WhatsApp as a GIF with a play button (but loop continuously when viewed in your Sticky sticker collection).

“For the time-being, not all the messengers have API for native sticker sharing,” notes Airapetyan. “That’s why, for example, your sticker is shared like a picture to WhatsApp, or like a GIF if it’s animated.”

He also concedes the cut-out tech is a little rough-round the edges at this point but says it will improve the more people use it — given the algorithms are learning from the data.

“Sometimes the cut-out tech isn’t perfect, but the more people will use Sticky, the better it will become itself!” he says. “That’s the best thing about the tech. We also work hard to improve it! For example, we can let people create stickers with their pets in hands.”

“Sticky is surely going to become a better app with lots of more features. We just need to find out what people need first. Stickers, in general, are very popular nowadays and the popularity will spiral up, for sure,” he adds.

The app is a free download, and the team isn’t even thinking about monetization at this point. “We just focus on the product right now,” says Airapetyan.