Salesforce launched three AI tools for developers today at the TrailheaDX developer conference. These algorithms, which fall under the new Einstein Platform Services, enable third-party developers to add Einstein intelligence to applications built on top of the Salesforce platform.

The new services include sentiment and intent analysis and some pretty sophisticated image recognition analysis tools, that, when properly trained, can count objects and even recognize attributes like color or size. The three services open up all kinds of possibilities for developers to tap into these advanced technologies to build sophisticated functionality into apps built on top of Salesforce.

The Einstein Intent tool allows programmers to understand the intent of customer inquiries, which could make it easier to automatically route leads, escalate service cases or personalize a marketing campaign through a custom app. This could be particularly useful for prioritizing customer service inquiries.

The Einstein Sentiment tool uses advanced technology to understand sentiment, even in cases when it is not entirely clear from the wording. Typically keyword-based tools have trouble with complex wording or sarcasm, but this tool is designed to deal with these. Richard Socher, chief data scientist at Salesforce, who came over in the acquisition of MetaMind last April, suggests if you have difficult wording like “not absolutely satisfied,” a keyword-based system might pick up on absolutely and satisfied and miss the not. 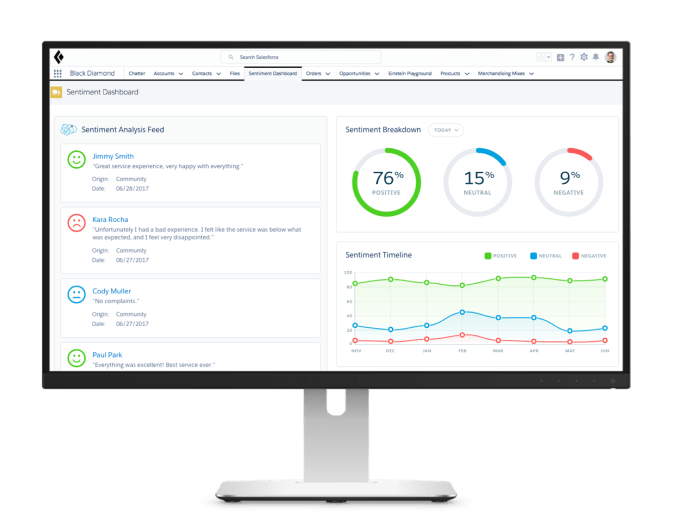 “These are much more robust at understanding this and some forms of sarcasm. The power of deep learning can be much more accurate. It’s not [just] using a preset list of positive or negative words,” Socher explained.

Perhaps the most remarkable of the three algorithms announced today is Einstein Object Detection, which developers can train to recognize objects and very detailed attributes about them including the number. This could come in handy when developing inventory apps, but could be used across a variety of scenarios which take advantage of image recognition technology such as measuring share of shelf in a store or identifying models for customer service calls.

When Salesforce introduced its artificial intelligence platform, Einstein, last fall, it was all about making the core Salesforce products more intelligent. Over time the company has added more intelligence across its line of products. Today, it’s focused on exposing some of that functionality to developers who build applications on top of Salesforce.

These tools very likely still require some skills around machine learning and model building, but they provide a base set of functionality out of the box that give programmers who otherwise wouldn’t consider artificial intelligence a tremendous head start.

The sentiment and intent analysis can take advantage of data you already have on your customers in the Salesforce CRM and service databases (assuming you’re using both). You can use other data sources if you wish, but having access to Salesforce data gives a working data source right away.

Socher has worked on this for some time on theoretical research level and is now seeing some of that work enter real-world use cases. “I’m excited to see it move from research to production data systems,” he said.