ThredUP, the online secondhand clothing store that has raised over $130M in funding is going old school.

The startup has announced they will be opening at least five brick and mortar retail stores by the end of the year, with the first one soft-opening today in San Marcos, Texas.

Why San Marcos, a small town of ~60,000 located somewhere between the cities of San Antonio and Austin? Because that’s where the shoppers are, of course.

The thesis behind ThredUP’s new foray into physical retail stores is that the startup has a ton of customer data that it can use to improve the old-school shopping experience. And, what’s a better data point when deciding where to open a store than the locations of your existing customer? ThredUP is opening stores in the cities where it has a particularly high density of existing customers – with one of those places being San Marcos.

And this is just one way that the startup plans to use data to beat other old-school retailers. They are also going to be able to basically guarantee that their customers like the styles they are putting in stores – because they’ll only stock stores with styles that customers in the area have been recently purchasing and looking at online. 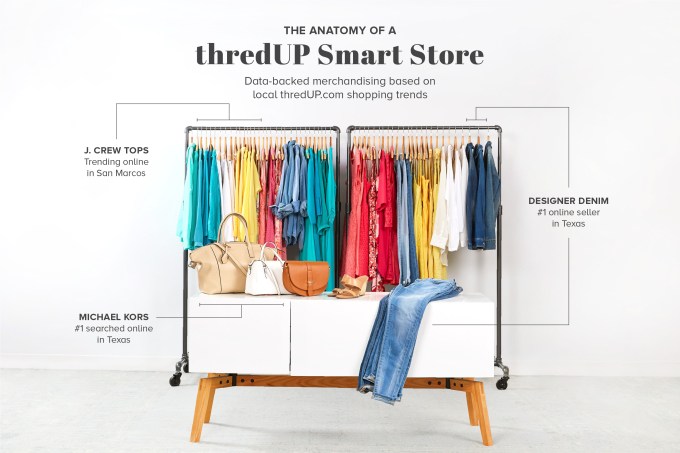 Essentially they are removing all of the merchandising risk that other brick and mortar retail stores are faced with, which the startup says will give them a much better chance at succeeding in the physical world.

Another cool feature – if you find an item you like in stores that isn’t in your size, you can use an iPad provided by the startup to take a photo of the item, and you’ll be shown similar items in your size from across the startup’s entire online inventory, which now is growing by about 1,000 items every hour.

ThredUP says 50% of their online customers have never shopped secondhand before – which is a big reason they wanted to open a physical space. While the startup has grown tremendously, on track to sell 10 million items this year alone, in order to continue to grow their core online business they need to expand to new users who may shy away from thrift stores, by showing them that there is a safe side to secondhand goods.