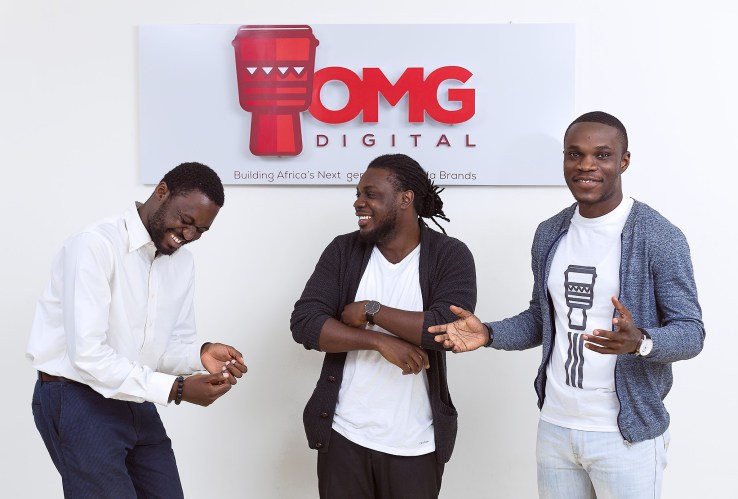 OMG Digital, the Ghana-based media startup dubbed the “BuzzFeed of Africa,” announced today that it has raised $1.1 million in seed funding. Its main site, OMG Voice, already has versions for Ghana, Nigeria, and Kenya, and the new capital will be used to expand into more countries.

Launched by Jesse Arhin Ghansah, Prince Boakye Boampong, and Dominic Mensah in February 2016, OMG Voice now claims 4.5 million unique visitors each month. OMG Digital already has a team of 25 and plans to launch sites for South Africa, Uganda, Zambia, and Tanzania. Its seed capital will be used to support its expansion, produce more video content, and grow its advertising and marketing departments.

Ghansah and his co-founders started OMG Ghana in 2012 when they were in college. Smartphones were becoming more popular, but Ghansah had a hard time finding interesting things to read.

“It was really frustrating for us because we would go online and all the content was just boring news and politics and stuff. So we wanted to create something for people like us, with listicles and lightweight content. Smartphones started to take off and Facebook became super popular as well, and that’s why we started OMG,” says Ghansah.

“Most of the people online back then were youth like us. BuzzFeed and Mashable were doing things for millennials, but we couldn’t really relate to their content, so we created something for ourselves.”

At first, Ghansah, Boampong, and Mensah didn’t see OMG Ghana as their main project, and tried to launch a microlending platform instead. But that struggled to get funding, while OMG Ghana began to gain more readers and make some money. The three decided to turn it into a media company and were accepted into Y Combinator. During their stint in the program last year, Ghansah says they learned how to be “super bold.”

“We wanted to start from Ghana but they said to go to other countries. YC pushes you to take bigger risks and push yourself.”

Ghansah adds that over a third of Africans are millennials, so OMG Digital has a lot of a potential readers. One challenge it faces that BuzzFeed doesn’t, however, is the wide difference in languages and culture across Africa.

Though most things can be shared between the sites, every country’s version of OMG Voice has a lot of tailor-made content. For example, the Ghana site has headlines like “14 Times The Phrase ‘Bye Felicia’ Was Just Too Perfect A Response In Ghana” and “6 Badass Warriors From Ghana You Should Know,” while Kenyan readers can click on “10 Reasons Why Kenyans Really Love Game Of Thrones” and “You Will Now Serve Jail Term In Kenya If You Are Found With A Plastic Bag.”

“There are a lot of cultural nuances and differences, but in some countries, there are some similarities,” says Ghansah. “Like Ghana and Nigeria are close in terms of culture, so it’s easy to create content for both of them. Kenyans and Tanzanians have similar cultures as well, so we are trying to tackle [expansion] just by going into the countries we are already in and finding the next closest market in terms of culture.”

The company will begin with English-speaking markets before tackling French and other languages, with the goal of one day being present in every African country. OMG Voice already has a culinary vertical called ServePot, and plans to launch tech and lifestyle verticals as well. The company will also began building an events business, with meetups and startup conferences.

Like BuzzFeed and other similar companies, OMG Digital monetizes through digital marketing. Currently 80 percent of its ad sales are from banner ads, but as in other markets, its advertisers are seeing a smaller return on investment and looking for alternatives that are more suited to mobile screens (about 90 percent of OMG Digital’s users access its content through mobile devices, in particular Android smartphones).

About 60 percent of OMG Digital users are between 18 to 24 years old and one of its value propositions is helping overseas companies figure out how to reach young African consumers in different markets (for example, in some countries Twitter is more popular than Facebook, so localized strategies need to take that into account). OMG Digital has already partnered with Coca Cola, Huawei, KFC, Philips, Pringles, and several of Africa’s largest telecoms, including MTN, on marketing campaigns and sponsored content.

“We want to pioneer content advertising in Africa with major brands and it’s going good so far,” says Ghansah. “Brands are starting to get it and the next two years will be huge for us.”