Periscope has a new revenue stream and a new way to attract the best live video content to its Twitter-owned app. Today Periscope launches Super Hearts — in-app purchase virtual goods that users buy for real money, send to creators as animated hearts that get them attention in the comment reel and that broadcasters can then redeem with Twitter for a monthly cash payout.

After the 30 percent tax on in-app purchases from iOS or Android and transaction processing fees, Twitter will pay 70 percent of the cash value of the Super Hearts to the broadcasters and keep 30 percent for itself. Super Hearts are rolling out globally on iOS and Android. For now, only broadcasters in the U.S. are eligible to cash out their “tips,” but Periscope hopes to extend that to everyone soon. 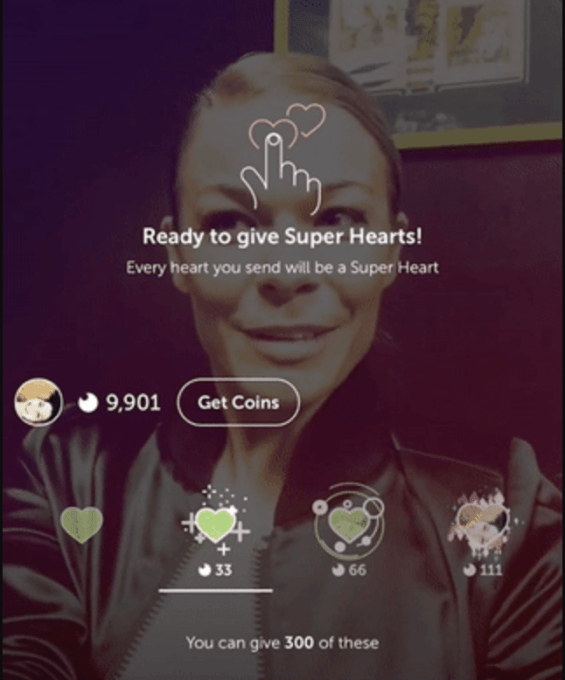 Super Hearts seem to be inspired by the live stream virtual gifting trend in China, where fans buy digital roses and stickers to send to broadcasters on Yingke, Yizhibo and other apps. Last week, Apple formally approved the process of in-app tipping, or users sending virtual goods to content creators that are exchangeable for real money. Yet Periscope tells me it was planning to launch this feature any way and didn’t work with Apple on it, but says the change “makes the spirit of what we’re trying to do more blessed” by Apple.

How to buy, send and cash in Super Hearts 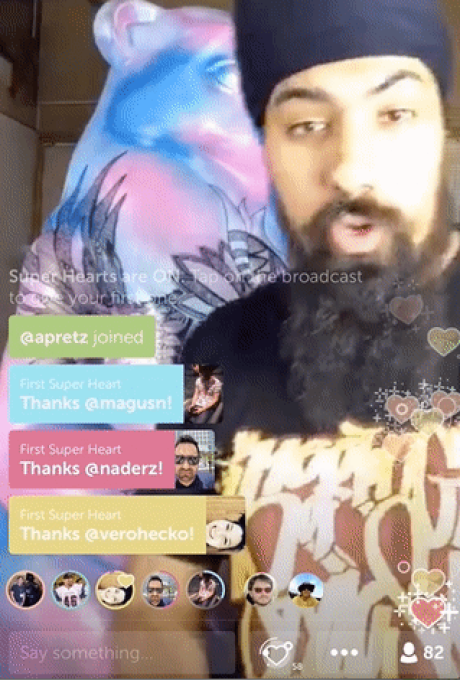 The feature is unfortunately a bit confusing. You’ll see the Super Heart icon while watching broadcasts. Tapping it opens the Super Heart store, but first you’ll have to buy a bunch of virtual “coins,” starting at $0.99 with packages ranging up to $100. Then you can buy three different kinds of Super Hearts with these coins, ranging from cheaper basic hearts covered in plus signs, to a bubbly and sparkly mid-range heart, to the most expensive ones that give off explosions and feature your face in the center. You can then send these hearts by tapping across any broadcasts you watch. For example, $0.99 gets you enough coins to send roughly 30 of the basic Super Hearts.

Sadly, the feature could exclude lower-income viewers as there’s no way to earn coins, unlike in many games that sell virtual currency but also let users grind to earn it free.

When users send the Super Hearts they’ve purchased, they’ll show up more prominently on the broadcast than free hearts that users can already send. The people who send the most Super Hearts during a broadcast are shown on a leaderboard, which other viewers can watch in envy or broadcasters can check to see who to shower with love on camera. For now, you can only buy and send Super Hearts from Periscope, though you’ll see them if you’re watching a Periscope broadcast via Twitter.

For every Super Heart a broadcaster receives, its coin value is added to their “star” count that appears on their profile. Once broadcasters have $175 worth of stars (around 185,000 stars) accrued, they can apply to join Periscope’s Super Broadcaster program. If admitted, they can cash out their star balance for real money via ACH transfer at the end of each month. If broadcasters don’t want to squeeze money out of their fans, they can turn off receiving Super Hearts.

“We created Super Hearts for qualified broadcasters to monetize their content, and our objective is to learn from and iterate on this program to help them realize the most earning potential. After standard fees from in-app purchases and payment processing, broadcasters will receive around 70% of the remaining value. Changes in fees and foreign exchange fluctuations means that the effective percentage can vary.”

You might feel like this is all a bit baffling, with coins buying hearts that earn stars that are redeemed for money. That’s because it is. Users and broadcasters may be hesitant about the feature because it’s so hard to understand how much you’re paying or how much your favorite creator is getting.

But for some mega-fans, the ability to show up prominently in the comments and leaderboard of their favorite broadcaster, or even get thanked by name, could be enough for them to wade through the virtual currency mathematics necessary. 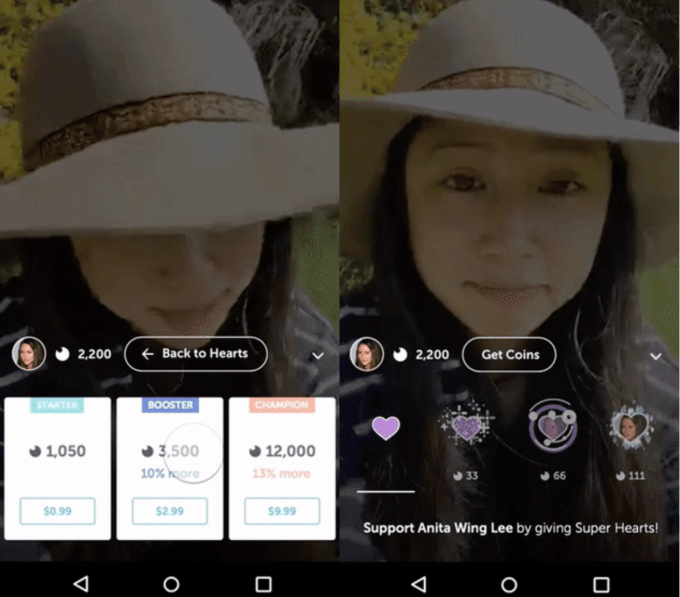 If Super Hearts really take off, they become a helpful revenue stream for Twitter, which recently started making a comeback with strong Q1 2017 earnings. Meanwhile, it could give creators a reason to broadcast on Periscope instead of Facebook Live, where they have to use clumsy mid-roll ad breaks to earn money, or Snapchat and Instagram, where they have to give their content away for free. 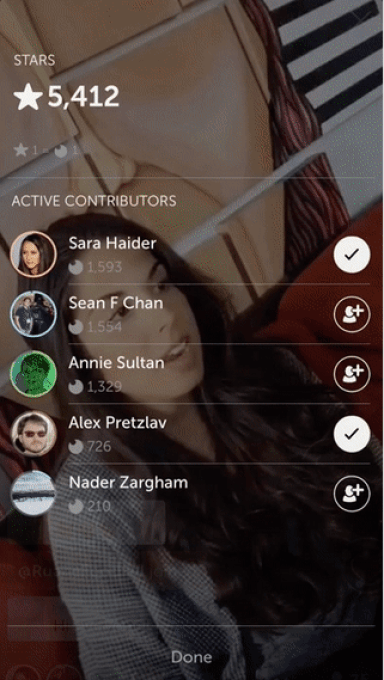 However, the broadcaster community is hesitant to say this will make them rich. One Periscope celebrity told me “I think it’s a great first step, but realistically this is going to provide pocket change for broadcasters. This isn’t going to be a monetization feature that will allow people to make big bucks, so I think they have to manage expectations with that.”

Broadcasters who want to turn streaming into a profession continue to look to Twitch and its cheering feature, Busker, which was built around creator monetization, and Patreon, whose subscription patronage platform just launched a paid fan-only streaming feature. There’s also YouTube, with its combination of ad revenue sharing and Super Chat, where fans pay to have their comments stand out.

Periscope could likely use an infusion of new content. The company has refused to reveal its user or broadcaster count in almost two years, which is rarely a good sign.

Periscope will have to be very weary of adult performers using Super Hearts to sell pornographic broadcasts. That seems to be the reasoning behind the application-based Super Broadcaster program and $175 threshold. Adult performers likely wouldn’t be able to pass the verification, and anyone who suddenly wants to dip into the skin trade would have to earn a bunch first and get approved before they could cash out.

Regarding the option to buy and send Super Hearts via Twitter, or the ability to spend Periscope coins on anything else, Twitter refused to say. But if this initial dive into the virtual goods space goes well, there’s plenty that Twitter could sell, from special stickers or badges to jazz up your profile, to ways to get your tweets seen by more people.

If Twitter can figure out what people are willing to buy without breaking its social network’s open platform for opinions, it could earn more off its smaller set of hardcore users instead of worrying about growing much bigger to drive ad views.