Within a few minutes, I’ve got one hand grasped gingerly on the zipper. The other is holding the bag’s handle in place. I unzip it slowly, as if performing surgery. There’s none of the pressure of a real life battlefield, but the potential humiliation of having to start all over again in front of the film crew is enough motivation to it right this time.

RE2 Robotics’ (pronounced “Re-Squared”) control scheme takes some getting used to. Each arm serves as an analog to the limbs on the military robot a few feet in front of me, but the control scheme and the exacting nature of every arm movement present a bit of a learning curve. After a few frustrating misses, however, I manage to save face in front of a room full of onlookers silently judging my robotic manipulation skills.

The Pittsburgh-based Carnegie Mellon spinoff has been developing the control scheme for about a decade now — around two-thirds of its existence. It’s the result of the growing movement of biomimicry in the robotics field, as more and more engineers look toward nature for inspiration. In the case of Re2’s Robotic Manipulation System, it was right in front of them the whole time. What better scheme could there be for controlling robotic grippers than our own arms?

The  control system sits atop a tripod, with two grips mounted on bars that curl over top like bicycle racing handlebars. Each grip has series of buttons controlled by the thumb. It’s those last few, which control the robot’s motion and camera position, that take the most getting used to. But the RE2 employee who operates the robot for the sake of our video demo assures us that within a couple of hours, the whole thing becomes second nature.

And that’s the motivating principle behind the system: a control scheme that closely mimics our own movement. The scheme is designed to operate the rover’s arms in some of the high stress environments, from decommissioning roadside bombs to handling harmful materials in the wake of a major disaster like 2011’s Fukushima accident. It’s the third “D” in the “dull, dirty and dangerous” paradigm roboticists inevitably raise when discussing the importance of replacing certain jobs with automation. 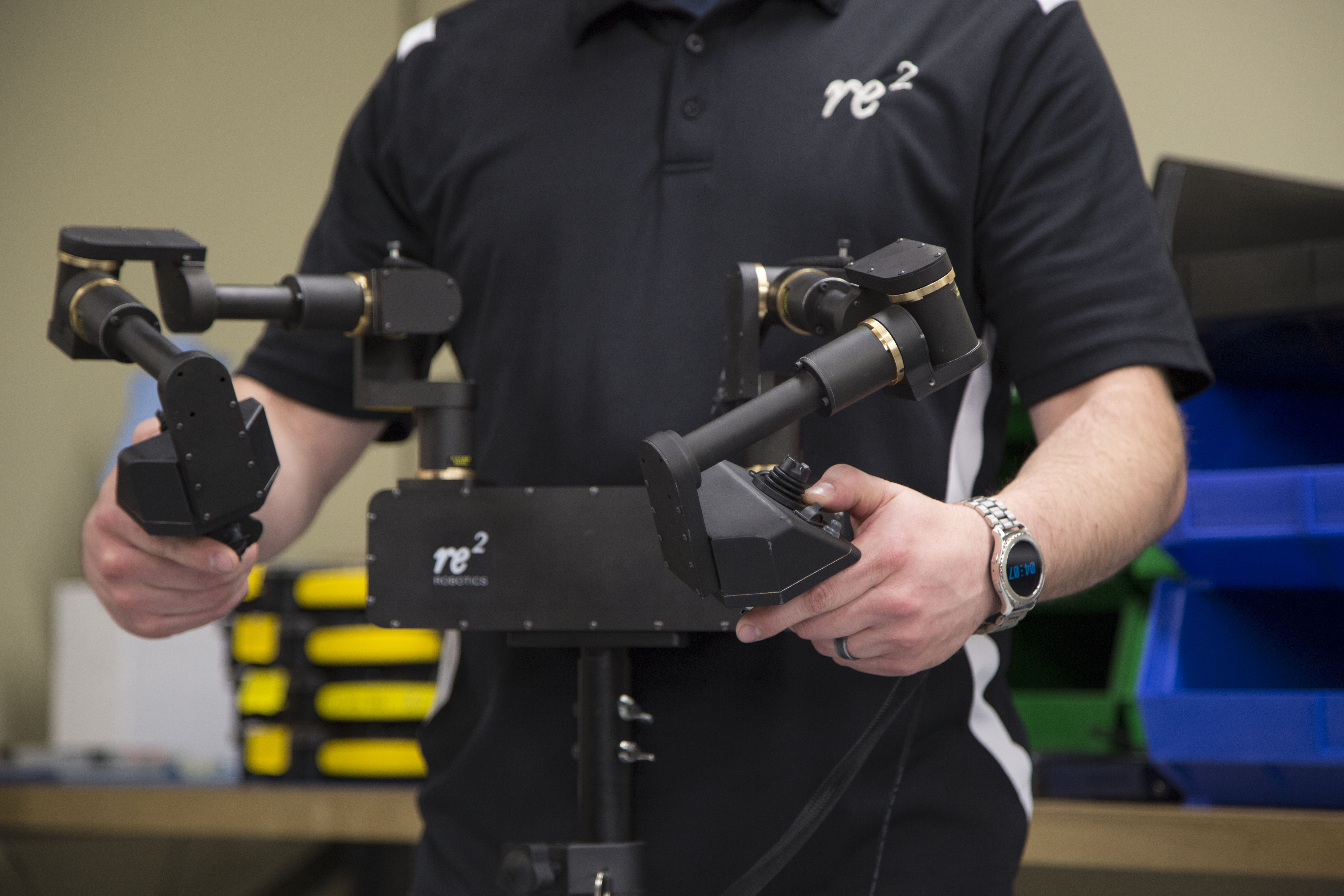 Over the last decade, off-the-shelf Xbox and PlayStation controllers have become a fairly standard solution for controlling these sorts of robots around the battlefields of Iraq and Afghanistan. They’ve proven a decent makeshift solution. After all, many enlisted troops fit firmly within a key demographic for the consoles and are likely already familiar with their controls.

But the systems could benefit from a more direct method in high pressure situations. So, a decade ago, Re2 began to develop its current control scheme, one it believed would be even more intuitive than a gaming console by directly mimicking human movement. The company’s system includes two modular arms that affix to a military robot like Endeavor’s (formerly iRobot) Packbot, along with the tripod-mounted control scheme.

“If you’re going to project that human capability, the most human way to control it is to have it be as much like you as possible,” says Pedersen. “That’s where we’ve come over the past decade, having true human-like capability. It’s no coincidence that these robots look like human torsos. These systems are a projection of you, remotely. It’s almost like an avatar, where you’re dealing with a threat out of harm’s way.” 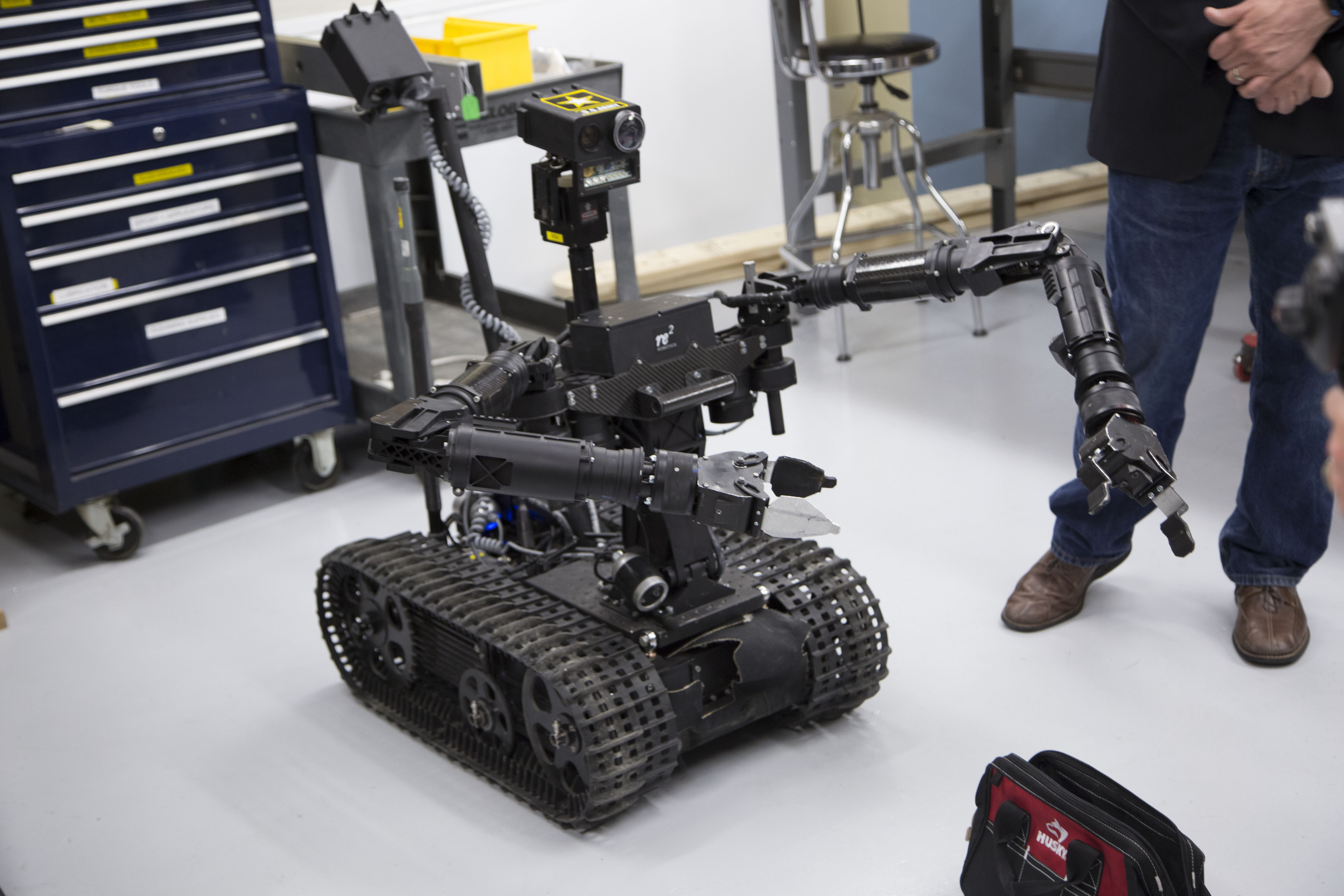 The operator controls the system from a safe distance by viewing the robot’s camera feed from a remote laptop. The company is also developing a set up that utilizes a VR-style headset to complete the avatar-like scenario, similar to the system that many drone makers have employed.

RE2 sees military applications as just the first step for the system. And it’s a logical place to start. Like so many robotics startups, military contracts are what kept the company afloat for many of its formative years. But while Pedersen concedes that such a control system could be utilized for hand to hand combat, he prefers, unsurprisingly, to focus on the positive.

“Yes, people could use this technology for other means,” he says. “But our charter is saving lives and extending it into new markets like health care, where we can do patient assist. [We can] help a person from a wheelchair to a bed or a wheelchair to a toilet, as the brawn for a caregiver.”