Any technology that only works in English neglects 75% of the world. That problem is especially severe for Facebook with its global userbase. Yet most languages are being left out by the advances in artificial intelligence centered around natural language processing led by researchers in the U.S. and China.

But today marks a milestone for AI accessibility. Facebook Messenger’s artificial intelligence assistant “M” can now make recommendations in Spanish of Messenger features to use if it detects that that’s the language someone writes in. M Suggests rolled them out in English two months ago. 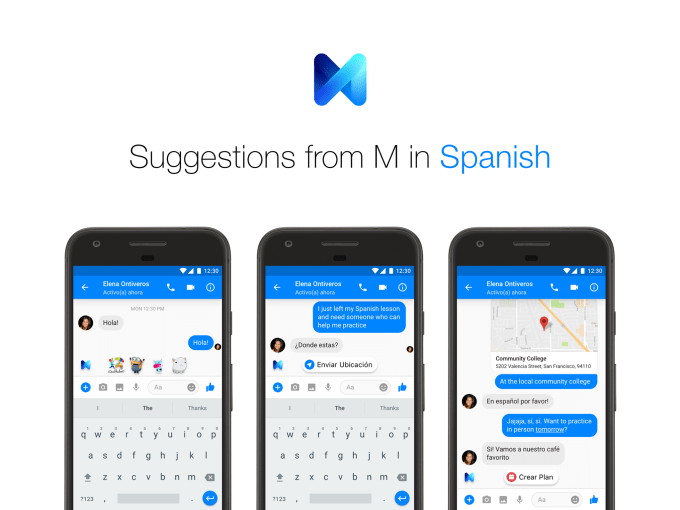 The feature scans the words and intent of your messages, then pops up optional suggestions from Messenger’s many features. Say “Te debo $20” and M suggests the payments feature. Write “Besos!” and it will surface lovey-dovey stickers you can send. Ask “¿Dónde estás?” and M pulls up the location sharing feature.

M Suggestions are now available to all Facebook users with their language set to Spanish in the US, and the feature is rolling out in Mexico.

Last year Facebook added a multilingual sharing button so Pages can post in one language and have it appear to people in their native tongues. And now well over 800 million users see translated News Feed posts each month after Facebook dropped Bing to focus on strengthening the AI behind its own translation technology.

Hopefully the next step for Messenger will be real-time translation for conversation partners across languages, that way we can connect, cooperate, and commiserate with people from different cultures. We fear what we don’t understand. But if Facebook’s translation tech can show us just how similar we are to people from other countries, it could promote tolerance between all humans.