Something happened to social media recently. I don’t know exactly when things changed, but almost overnight, randomly scrolling through feeds became a lot less enjoyable. Flame-wars, bad news, fake news, worse news and anxiety-fueling comment sections meant that social media is no longer the escapism it once was. Along comes Binky counter all of that, creating the ultimate anti-social media app.

Binky gives you a social media feed to interact with. Posts are called Binks. You can comment on stuff, you can like the things you enjoy, you can even re-Bink things. You can even swipe right and left on stuff, if that’s your preferred UI for expressing your desires or hang-ups. 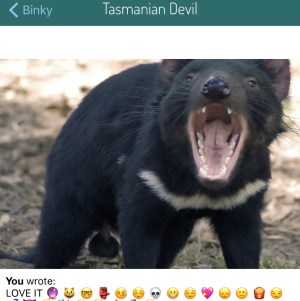 All right, grumpy. Calm down.

The twist is that nothing you do makes it out into the real world; all your liking, re-Binking and swiping is completely, utterly, unavoidably futile. It’s kind of like being in space, where nobody can hear you scream. Except without having to drop a quarter of a mil on a ticket.

“It started out as a joke,” Dan Kurtz, the app’s creator says. “I was doing a satire on the moments when you’re flicking through your apps because you’ve got nothing better to do. Facebook is too much anger, stress and sadness, but you want to do something on your phone. Binky solves the problem where you want to scroll through something, but nothing in particular.”

From there, the joke started gathering steam, into a kid-safe Fischer-Price version of a social media app. When Kurtz started showing the app off to friends, people started pointing out that it wasn’t as pointless as it seemed.

“As soon as I started showing it to people, they said it felt a little bit like a nicotine patch for social media,” Kurtz said. “I put it out on the app store, and then the guy who made Cow Clicker — itself a satire on Farmville — ended up writing an article about it, and the rest is history.”

So… Is this a joke? A piece of performance art? A tool for kicking social media withdrawals symptoms without having to take a sledgehammer to your WiFi box? Is it, perchance the philosophically polar opposite to Yo, ready to raise a chunk of cash at a ridiculous valuation at a moment’s notice?

Perhaps it’s a little bit of all of the above. Most of all it strikes me as a commentary on what drives us to pick up our phones every twenty seconds. In particular, perhaps it will succeed in making us consider what actually makes us happy. When shouting into Twitter, Facebook and the various comment fields around the ‘net loses its luster, perhaps Binky is the perfect app after all: A no-cost, instant gratification, visually-enhanced habit-reinforcing fidget spinner for the social-media addicts among us.

“I am enjoying keeping the joke going,” Kurtz says, and suggests maybe he can start building a brand around and community around Binky. He laughs: “the joke gets better the more serious I take it, so if you know anyone who wants to put their money where their sense of humor is, I’m open to conversations with investors too.”

The app is free on iOS, and Kurtz suggests that an Android version is in the pipeline.