For most of the history of blockchain-based currencies and assets, the story has been all about Bitcoin. At a market capitalization of around $40 billion, it remains the most valuable cryptocurrency.

But with the rise of a new ‘chain on the — ahem — block, namely Ethereum, and new ways to fund the development of new crypto-platforms with ICOs, the narrative is shifting somewhat to the entire cryptographic asset class.

Today, let’s take a more in-depth look at some of the historical trends in the digital currency space, paying close attention to Ethereum and its role as the platform of choice for new cryptographic assets.

The number of new digital assets is on the rise

In roughly the past 12 months, the number of cryptocurrencies listed on CoinMarketCap.com, a main reference site for digital asset developers and speculators alike, has increased significantly.

Below is a chart compiled from the count of cryptocurrencies listed on historic snapshots of the site’s main table starting with the first snapshot on April 28, 2013 (featuring a whopping seven cryptocurrencies) and the most recent snapshot from June 4, 2017. 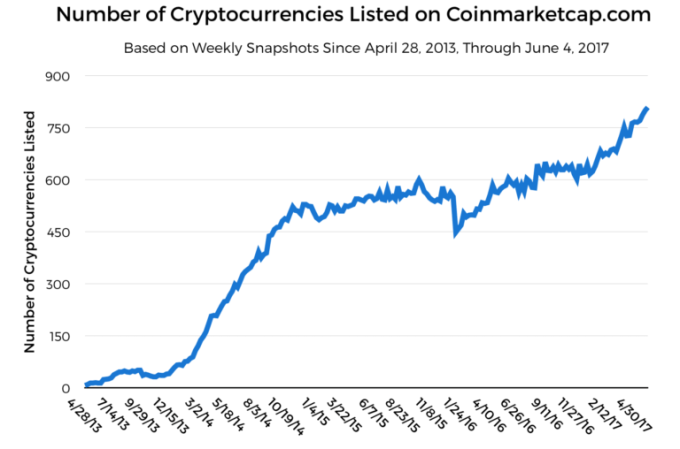 The open-source nature of most cryptocurrency systems means that it’s trivially easy to make copies of the software (or “fork” its code, in developer parlance), make some modifications to the protocol and release it as a new, wholly separate system.

As Bitcoin’s price began to increase rapidly in the latter half of 2013, the aspiring Satoshi Nakamotos of the world began forking various cryptocurrency protocols to establish their own coins. By 2013, most of the forks were off of Litecoin, which is based on Scrypt.

With Bitcoin’s price spike at the end of 2013, it had become inefficient to mine Bitcoin on commodity hardware (like graphics cards) because the arms race in the Bitcoin ecosystem produced a new breed of specialized hardware.

Scrypt, at the time, was still economical to hash on graphics cards, and as Litecoin and a few other Scrypt-based currencies began to appreciate in value, wholly separate cryptocurrencies were forked off of the original protocols to rise anew. Remember the goofy, meme-based Dogecoin? That was a fork of Litecoin. And in case you’re interested in looking at the “family tree” of cryptocurrencies, MapOfCoins.com produced some really interesting data visualizations.

The goal was to create cryptocurrencies as valuable, or at least as lucrative, in the short-run, as Bitcoin. This somewhat haphazard approach of throwing cryptocurrencies against the proverbial wall and hoping that something sticks was certainly effective at expanding the scope of blockchain-based currency systems; however, that alone doesn’t explain the appreciating value of the asset class as a whole.

If the forkable, derivative-by-design nature of cryptocurrencies explains the breadth of the ecosystem, what explains the growth in value?

Part of it is surely market speculation, and another part of it is that cryptocurrencies and other blockchain-based assets do have real-world applications today.

But another part comes from cryptocurrency entrepreneurs wising up to the fact that their little upstart protocols, in order to be valuable, needed to have an ecosystem built around them. That, of course, takes time and money.

Today, though, the fundraising mechanism of choice appears to be the initial coin offering. As Alex Wilhelm explained in an article for TechCrunch:

“An ICO is a fundraising tool that trades future cryptocoins in exchange for cryptocurrencies of immediate, liquid value. You give the ICO bitcoin or ethereum, and you get some of Billy’s New Super Great Coin.”

This is how Ethereum’s development was funded, by way of a pre-sale of Ether for Bitcoin in July 2014. That pre-sale — an ICO by another name — raised some 31,591 BTC, valued at more than $18.4 million at the time.

Although the mechanics of ICOs have been in practice for several years, the name and label for initial coin offering events has only gained some currency recently. And the ICO market has really hit a hockey-stick growth trajectory. 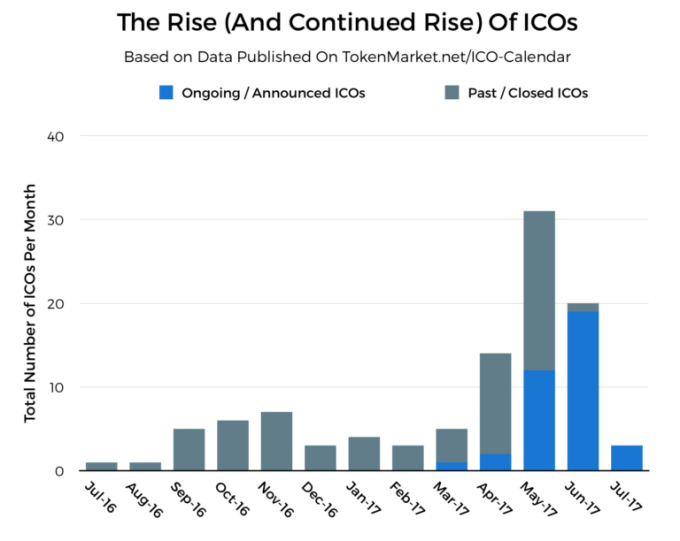 Based on data obtained on June 2 from the ICO Calendar on TokenMarket.net, the total number of ICOs listed on the site increased sixfold between March and May of this year.

Back then, early speculators in Bitcoin, flush with newfound crypto-fortune, plunged their money back into emerging cryptocurrencies. This was done partially for fun (see Dogecoin and other novelties) but also to chase the same kind of returns they enjoyed from Bitcoin investments.

A recent article from CryptoHustle suggests there might be a similar mechanism at play today, but it’s not Bitcoin millionaires fueling this ICO boom/bubble. Instead, CryptoHustle explains that “[t]he ICO mania is likely due to early Ethereum adopters making serious returns after the last bull run.”

It’s blockchains all the way down

For now, that bull run has continued unabated. Last week was the first time that Ethereum’s market capitalization reached half that of Bitcoin’s, a massive milestone for the relatively new blockchain. 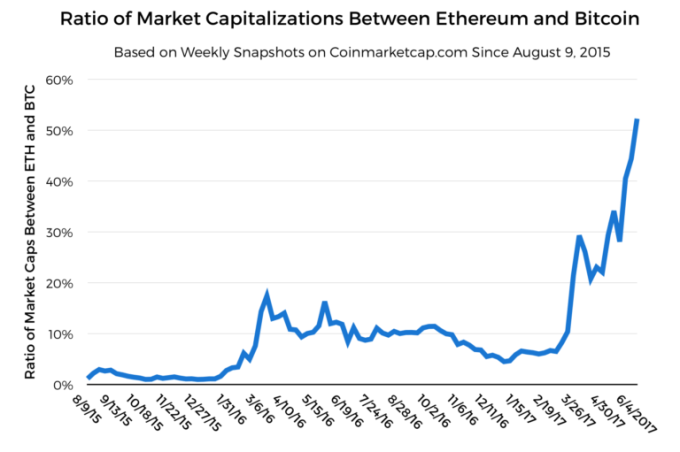 What explains the price increase? Speculation and other factors are no doubt at play here too, but it’s likely the architecture behind Ethereum’s blockchain system that makes it uniquely valuable, or at least uniquely flexible and extensible.

Bitcoin is a relatively bare-bones blockchain system that requires layers of protocols to be built on top of it to make it a usable platform for utilities like smart contracts. Platforms like Counterparty and Omni are both built on the Bitcoin blockchain and have sprouted their own collection of digital assets and services that ride on top of them.

This ease of development, combined with the rising price of Ether and a desire by early stakeholders to re-invest in the Ethereum ecosystem, has made Ethereum the platform of choice for crypto-asset entrepreneurs — at least for now.

Based on the same data extracted from TokenMarket we looked at earlier, we charted the proportional share of Ethereum-based assets versus all other assets that have either ICO’d already or soon will. 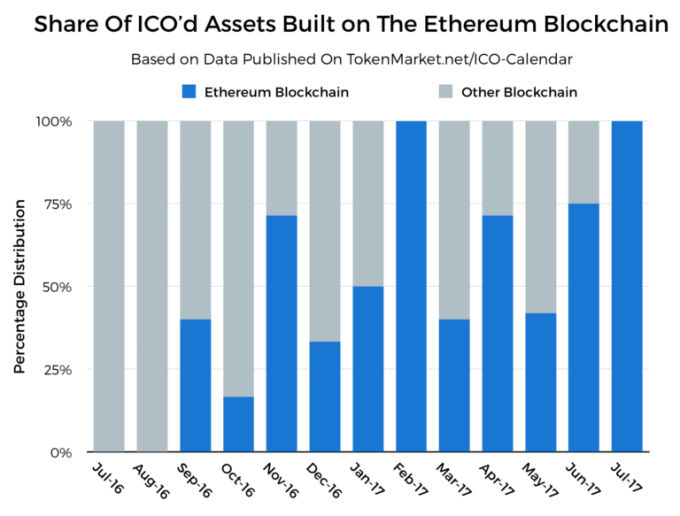 From zero percent of the monthly asset offerings less than a year ago, to more than half of all the closed or announced ICO events tracked on that page, the growth of Ethereum is impressive.

Ethereum’s flexible, extensible blockchain system makes it relatively easy for developers to build and launch their own DApps, DAOs and crypto-assets. But ease-of-use is not sufficient to explain Ethereum’s growing traction in the new digital assets space. It’s where a disproportionate amount of the money is, too.

For these final charts, we extracted the rows from CoinMarketCap’s listing of digital assets. The table lists names, blockchain platforms, market capitalizations and prices of some 119 assets.

Although roughly a third of the assets listed were built on Ethereum, just over three-quarters of the market value of all of these assets is tied up in assets built on top of the Ethereum platform. 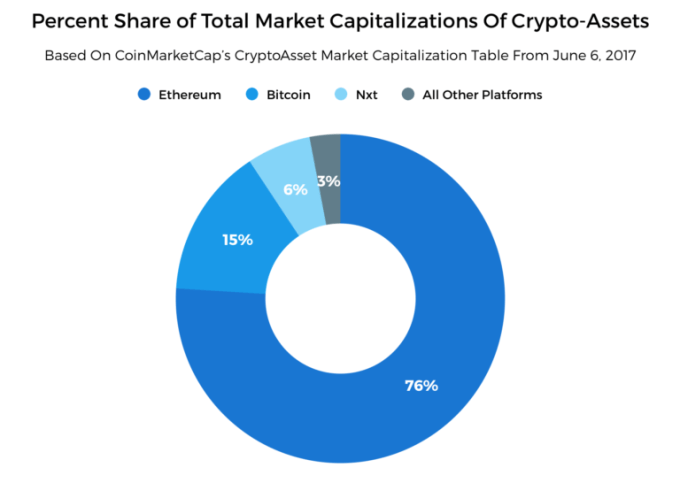 At the time of writing, there’s approximately $3.4 billion in market value represented by the 119 crypto-assets listed on CoinMarketCap’s digital assets page. Of that, around $2.6 billion is tied up in assets based on Ethereum.

The value of crypto-assets listed on CoinMarketCap is divided between those built on Omni and those built on Counterparty. Ethereum is the platform of choice because it offers a blockchain platform with a built-in abstraction layer, which serves to unify the ecosystem.

Ethereum offers the tantalizing promise of one chain to rule them all, or at least one chain to act as the foundation. Ether traders, entrepreneurs and developers alike are keen to let a thousand tokens, DApps and DAOs bloom because, although each of these assets is distinct, their roots run deep and ultimately back to Ethereum.