While some of these gains are from bitcoin itself (BTC is up ~160 percent in the same two-month time frame), other digital currencies like Ethereum are also responsible for the increase, which on its own has increased ~439 percent over the last two months.

There’s perhaps no better way to show this diversity in gains than by looking at a chart of bitcoin’s “dominance” — i.e. what percent of the entire cryptocurrency market cap is represented by bitcoin. For years this had always hovered around 80 percent, but in the last few months has fallen to below 50 percent — with currencies like Ethereum and Ripple taking its place. 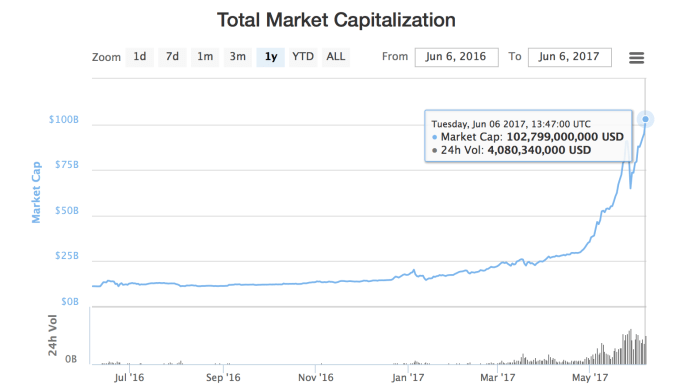 It’s hard to be an experienced investor, or even an at-home part-time trader, and not think of a massive bubble when you see that some asset has increased more than 400 percent in just a few months. It’s just how history works — when an asset rises that fast it’s a near certainty that it will come back down. Markets are irrational, after all.

That being said, we may look back in 12 months and realize that this two-month period of insane growth was less of a bubble and more of a rebirth of cryptocurrencies as a whole.

The fact that these gains have come from currencies other than bitcoin are a good sign that this is less of a bubble and more of a resurgence of interest in crypto. It makes sense that Ethereum is on a tear — the cryptocurrency has technological improvements over bitcoin, including the ability to code smart contracts directly into the blockchain, which in turn allow for things like the ability to build totally new tokens and even host ICOs (initial coin offerings).

The public has never been able to put their money directly into a technology that has so much potential but is still developing.

And similarly, Ripple, a cryptocurrency based on inter-bank settlements, has signed up more than 100 banks worldwide. Even if this takes a while to implement (which anyone who works in the old-school banking industry will confirm), it’s still tangible news and a reason for people to get excited about the currency.

These recent developments certainly don’t justify increases of 400 percent in 60 days. Both Ethereum and Ripple have been around for a lot longer than a few months. So if these were publicly traded companies, there would be (almost) no reason for drastic rise in value. But cryptocurrencies are new — most of the world has no idea what bitcoin is, let alone Ethereum and Ripple and other currencies.

The public has never been able to put their money directly into a technology that has so much potential but is still developing.

For example, a technology enthusiast in the 1990s may have foreseen the rise of the internet, but had no way to directly take a stake in the technology. The idea of applying cryptography to the storage and transmission of data is still very new. And the fact that anyone can directly buy the currency that powers these cryptographically secured blockchains is much like the public actually getting a chance to invest in the internet during its infancy.

There is one rational explanation that, if true, would totally justify this rapid increase in price across some of the major cryptocurrencies. And that is, maybe these currencies are actually worth these high prices, and maybe even worth many times more than that at which they are currently trading.

But the problem is we have no way to figure out their value. Cryptocurrencies aren’t public companies with earnings and expenses and EPS. For example, we can look at Apple’s financials and determine its book value — what the company’s assets would be worth if hypothetically liquidated today. Of course, stocks trade at a premium to this, because people are enthusiastic that Apple will continue to perform well and this book value will continue to rise.

But we can’t do this with cryptocurrencies. We could guess — and compare it to things like the total money or gold supply in the U.S. For example, if you’re someone who thinks of cryptocurrencies as a store of value, the total estimated value of all gold in the world is more than $8 trillion dollars… meaning if bitcoin would ever replace or supplant gold, its current value is pennies on the dollar.

If you’re someone who thinks of cryptocurrencies as a genuine currency, you could compare the market cap to M2, which is the total money supply in the U.S. — cash and checking accounts, as well as “near-money” accounts like savings, mutual funds and money-market securities. The total value of M2 is about $13.5 trillion, also meaning cryptocurrencies are just a small fraction of that.

Be an informed “investor”

I’ve long cautioned readers (and friends) from buying cryptocurrencies because they have seen it rise and just want to make a quick buck. The past two months have led to a tremendous surge in public interest, with mainstream news like CNBC and CNN explaining how to “invest” in bitcoin and other cryptocurrencies.

Just make sure you’re doing it for the right reasons. Buy cryptocurrency to learn about it and transact with it. Or buy it because you are betting that this new technology will change the world by:

These are just a few options, and if you’re in tune with the cryptocurrency world, you’ll know the opportunities are endless. So if you’re going to buy cryptocurrency, do it because you see the long-term vision (and sure, ostensibly the financial gains that may come from them), not because you think it will blindly appreciate and give you a good return on your “investment.”

The author holds bitcoin and Ethereum and other smaller cryptocurrencies.