Riley was part of the winter class at Y Combinator. (In fact, CEO Daniel Ahmadizadeh said he and his co-founder Helson Taveras applied several times with different products and ideas before getting in.) The startup is announcing today that it has raised $3.1 million in seed funding.

The current version of Riley is focused on real estate agents. If you see an ad or listing for an agent who’s using Riley and you decide to give them your information, you’ll get a text message within a few minutes from the agent’s “office manager” or “assistant,” asking some basic questions about you and what you’re looking for.

So even if the agent is busy or sleeping, the potential customer still gets a response right away. And it goes beyond being a simple auto-responder — Riley has a team of live concierges (Ahmadizadeh said they’re mostly college students for now) who follow scripts. Over time, as the real estate agents rate their performance and review their scripts, the concierges should get better.

And after each conversation, Riley can tell the agent which leads should be pursued first. 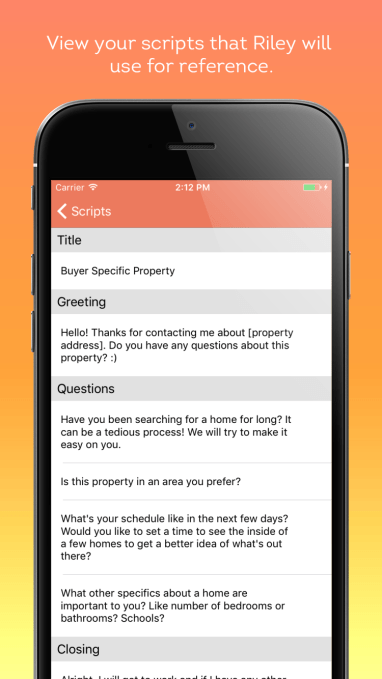 “When the real estate agent wakes up in the morning, they’ll know which hot lead they should focus on, versus the nine other cold leads that came in the middle of the night,” Ahmadizadeh said.

Ahmadizadeh said Riley has already built software to make the interaction easier for the concierges, and over time, he hopes to automate more of the process — though even under the current system, Riley is already managing more than 100,000 conversations each month.

In addition, he eventually plans to expand beyond working with real estate agents: “Our thought longer term is to be vertical agnostic — not just real estate — and communication-channel agnostic.”