The League, a dating app that prides itself on selectiveness and requires members to be approved before joining, has traditionally taken expansion pretty slow. Originally launched in early 2015, the app is still only in 7 cities – New York, San Francisco, Los Angeles, Chicago, Boston, Washington D.C and London.

But the startup just announced they are about to embark on a summer tour, adding 10 cities before the end of August.

These will roll out in batches, with the first three to launch being Philly, Atlanta and Miami in early June.

The startup will also be hosting a launch party in each city, which they explained is a good way to show its new members that The League is more than a random app on your phone – and actually has a human and community element behind it. This is especially important because a major component of The League’s monetization strategy is pairing you up with a real person (who they call a concierge) to help you perfect your dating profile, as well as advertising real-life events in your city.

A lot of data goes into deciding what cities The League expands to. Instead of rolling out nationally on day one like other dating apps have done, they have focused on slowly adding cities to make sure they are the right ones to support the app. For example, the startup looks at the amount of college educated singles in each city before launching, which they aptly translated into a list of the best cities for aspiring power-couples. 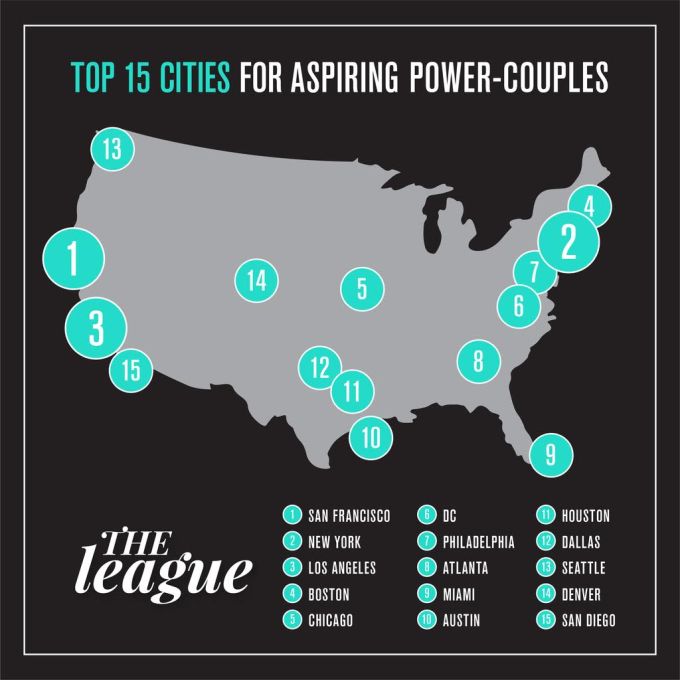 Of course since The League requires approval to join, the startup needs to make sure they have enough users in each city before they open the doors. That’s why each city has a waiting list that is already open today. Since The League typically likes to launch a city with 2,000 “founding members”, and their approval rate is between 20-30%, a city needs about 10,000 people on the waitlist before it makes sense for the app to launch there.

These 10 new cities will bring The League to 16 total cities by the end of the summer, putting them close to their new goal of 20 cities (with at least a few more being international) by the end of 2017.