Telegram, which puts a focus on security, introduced chatbots nearly two years ago, and now it is bringing support for payments for chatbots. That’s likely to open up a whole series of commercial opportunities for companies that want to use the chatbot platform to connect with consumers.

The most obvious is e-commerce, but real-life commerce through bots — for example, buy a coke in a shop by interacting with its bot — is a possibility that other companies beyond Telegram are considering. Kik CEO Ted Livingston recently told TechCrunch that the introduction of payments is key to making chatbots live up to the hype.

“Imagine a world where you can order pizza, pay for a pair of shoes, hire a cab, or refill your subway pass — all in a few button taps on Telegram,” Telegram explained in a blog post.

Telegram is working with Stripe to enable payments, but it has plans to add support for more localized options such as RazorPay, FlutterWave, PaymentWall, Yandex.Money and Qiwi, which will give it a stronger footprint in India, Africa, Russia and beyond.

The company is showing off the possibilities with a demo account — @ShopBot — and it’ll be interesting to see how developers adapt this new feature.

Already messaging apps in Asia have become synonymous with offline commerce and mobile wallets, and Telegram is one of the first of its kind that’s popular in Western markets to take this step. Facebook added the very same feature to an initial 30,000 chatbots back in September. 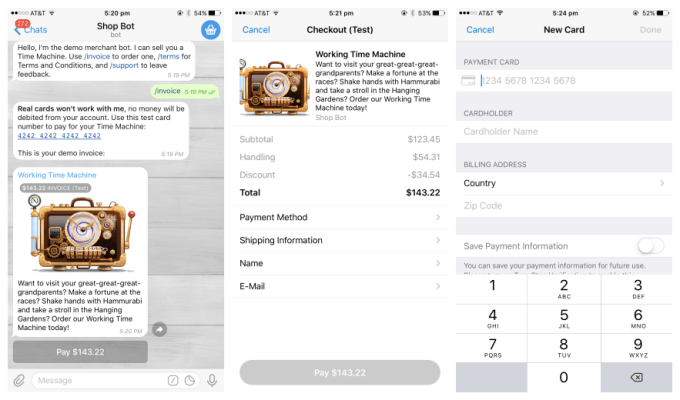 A sample of payments through a Telegram chatbot

Payments could be the highest impacting new feature, but they are by no means the only addition with Telegram version 4.0.

The app has traditionally handled media well — with video previews and link snippets appearing inside chats — and now it has opened its “Instant View” webpage layout for customization.

The feature launched last November to offer a quick-loading and Telegram-optimized interface for reading websites, not unlike Google AMP and Facebook Instant Articles. Previously, it used a limited layout option for links, but now Telegram has outed its Instant View Platform to enable unique designs.

Website owners can design their own options, but Telegram is also enabling its users to take the initiative to widen the template options on offer. Users can earn $100 for every template they create, while there’s a $10,000 top prize and $5,000 for the runner-up. 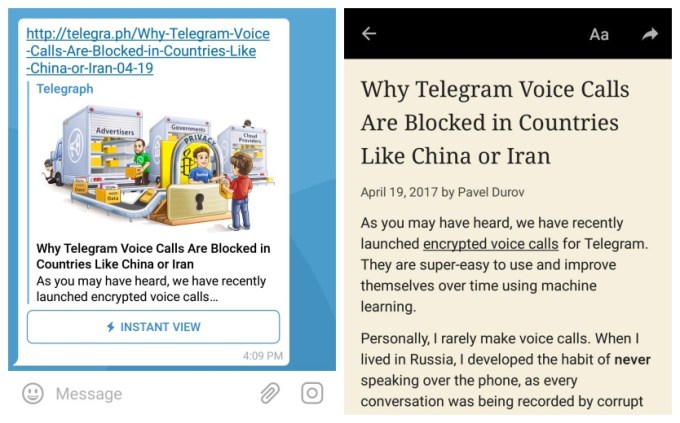 The feature is also being extended to channels, Telegram’s broadcasting feature that lets individuals create groups for one-way communication. As of today, channel owners also can send video messages to their followers. There is now the potential for those messages to gain visibility beyond Telegram because they will now be available via dedicated URLs called “Telescopes.” So, a Telegram channel video might end up being shared on Facebook, Twitter or other channels beyond the messaging app.