Facebook’s family of apps are moving in together. Facebook, Messenger and Instagram are each testing a feature that shows notification counters from the other apps and lets you instantly switch between them.

The feature could boost engagement across the apps by using those maddening red notification jewels to constantly remind you there’s something to see in the other apps. This way if you miss or dismiss an alert when you first receive it, or you don’t get push notifications from every type of activity, you’ll still see that red number lingering in the corner, beckoning your attention.

That’s also why some users will probably hate it. It exploits people’s anxiety about unread alerts and red dots in their blue apps to compel them to action. 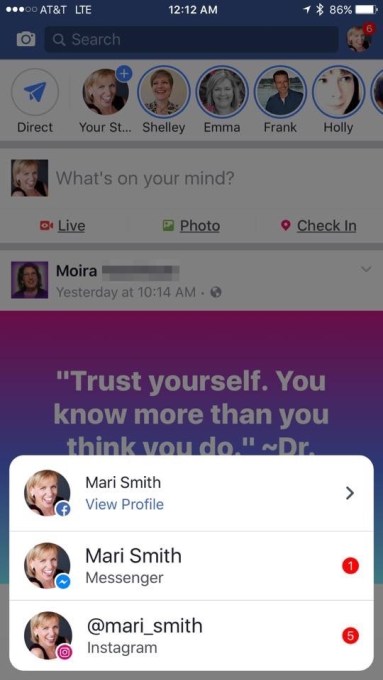 “We are conducting a very small test to make it easier for people to discover and connect with the people and things they care about. We’re exploring ways to help people switch more easily between their Facebook, Messenger, and Instagram accounts.”

The pop-over cross-app switcher appears when some users tap the profile icon in the top corners of Facebook, Messenger or Instagram. That icon displays a sum of the pending notifications from the other apps. Once opened, users see their accounts on the three services and a red jewel denoting unread alerts in those apps, which they can switch to with a tap. Fellow Facebook acquisition WhatsApp isn’t included in the switcher at this time.

Essentially, Facebook is leveraging the massive amounts of time people spend in these three products to override their devices’ operating systems and continuously pester people about its app family’s activity.