Pinterest offers advertisers a unique opportunity for its audience of 175 million users: the ability to catch them at all points of their purchasing lifetime. Brands can advertise against moments of discovery and people searching for and saving products, eventually pushing them down to the point of actually buying a product. But since it fired up its ads business, it’s had to give advertisers the kinds of tools they’re used to using.

Now the company is starting to roll out the same image recognition that it uses to power its visual search and recommendations — the same tools that will know to show you a cool stool based on that office chair you saw and liked — to its base of advertising content. That means that instead of displaying just on keywords and other kinds of traditional tagging, advertisers will get the benefit of their ad showing up next to a product that is related to the ad based on its core visual search technology.

Pinterest president Tim Kendall unveiled the plans and showed off a few of the mechanics of it on stage at TechCrunch Disrupt NY 2017.

“Until now we’ve only applied the visual discovery tech to the organic consumer facing products,” Kendall said. “But the news is we’re now applying it to ads. Think about Pinterest, we have a depth and breadth of visual signals on products and services. We’ve got all that information, we have all these Pins, and the way that people navigate those pins is very visual. We leveraged the way people actually use Pinterest. We can identify colors, shapes, textures. We’re able to understand the combined affect people find appealing, even when it can’t be communicated in words.” 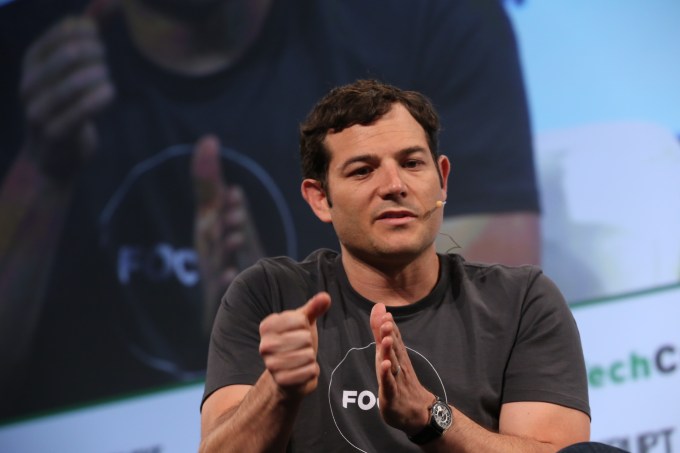 The ads for now will show up in the home Pinterest feed through Instant Ideas, a small circle at the bottom of a pin that jumps straight to related pins. They also show up in the related pins section when users tap a pin and blow it up on their feed. In the future, Kendall said the technology makes sense for its other products — like Lens, its new real-world visual search product that works through your camera.

The company is effectively flipping a switch, adding the relevancy elements to its existing ad inventory. Part of the reason for this is to improve the Pinterest experience in general — if users see more relevant ads that look closer to the kind of content they are seeking on the service, they’ll feel better about going to Pinterest. But given that Pinterest is theoretically improving the experience with that move, the company is hoping to show advertisers right away the impact of the addition of that technology to its ad products.

And with that additional relevancy, especially as advertisers are able to more quickly push users closer to the point that they buy something, may come more advertisers. Pinterest initially spent much of its time building ad products that these brands might find on other platforms, such as tagging based on traditional demographics and keywords, to reach parity with those networks. By just relying on visual elements, Pinterest is hoping to lessen the load to advertisers, and show the real potential behind its user behavior and technology.

“The technology is getting better, it’s something we’d always imagined that we do, and when you’re building an ads business from scratch there’s some things you have to build that are just standards,” Kendall said. “We’re getting to that point now where we’ve hit parity in a lot of parameters. So we’re starting to be able to segway into differentiation and build things that other people can’t. Or they could build it, but because of the nature of the products, this would make less sense.”

Pinterest has been tapping into new kinds of ways to help consumers identify and discover products and catch them at the moment they begin to get interested in purchasing something. Pinterest’s Lens, for example, helps collapse the distance between the discovery process on Pinterest and the real world, making it easier to get users to make a sort of mental note to look into a product later. As they save those products or start to search more in-depth for something, Pinterest is able to dig deeper into their behavior and figure out the kinds of things they like.

All this is important as the company tries to convince advertisers that it’s not just a kind of experiment or curiosity. The company reportedly was on track to generate $300 million in revenue, an enviable number for any ad-driven startup. But if it’s going to make that leap from $300 million in annual advertising revenue to the kind of fire hose that Google or Facebook have created, it needs to be able to go to advertisers and show them a differentiated — and equally powerful — advertising opportunity.

So while this may seem like a small tweak, it’s actually one of the first times that Pinterest is really flexing its Pinterest-iness against its advertising products. A tool like this is a kind of actualization of the full promise of Pinterest — helping people discover the kinds of products they didn’t know they wanted, or the content they didn’t realize they thought is interesting. Pinterest is in a unique position because most of the content on the service is products, which is by design because that’s what the user base enjoys. Brands have a unique opportunity to tap that desire, making it one of the highest-potential advertising platforms.