The major cloud infrastructure vendors know a thing or two about securing their platforms, but they still can’t protect their customers against user configuration error. That’s where RedLock, a startup emerging from stealth today comes in. It can warn you or fix a user error that could expose your data.

Clearly, the cloud vendor has primary responsibility to ensure that the underlying infrastructure is secure, but it’s up to customers to secure their own data, based at least partly on how they configure each cloud instance. When you consider that a company could launch hundreds or even thousands of cloud instances per day across a range of vendors, launched by a variety of developers and operations employees, the problem only multiplies. RedLock is a cloud service designed to save your company from configuration mistakes that could leave your data vulnerable.

Say, for example, that one of your developers starts an EC2 instance with a MongoDB database, populates it with customer PII and accidentally leaves it open to the internet. RedLock would save you from this potential disaster, says Varun Badhwar, company founder and CEO, by issuing a warning that the data in this database is exposed to the internet and asking if you really want to do this.

Badhwar has been around the cloud security space since 2005 when he helped build the security for force.com, Salesforce’s platform as a service. Later he helped launch CipherCloud.

His latest company offers a range of cloud security services including a high-level view of your cloud activity across supported vendors, policy monitoring, where you can set a policy and have RedLock enforce it automatically or run it by you first, anomaly detection and risk measurement. It also will allow you to do forensics on an incident after the fact.

The RedLock service integrates with your infrastructure service at the API level. There is no agent or proxy required, according to Badhwar. For now it supports AWS and Google Cloud, but later this year, it will also add support for Azure, giving the company support for the big three cloud infrastructure vendors. 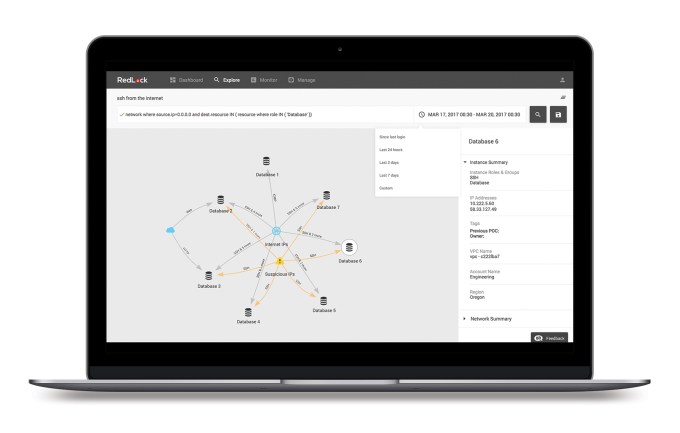 Surely, the cloud vendors could each provide a service like this for customers, but as Badhwar points out, such a solution would very likely only work for the individual vendor’s cloud, and RedLock provides a security picture across multiple clouds.

The company also announced that it has raised $8.5 million in Series A, which brings the total raised to $12 million including an earlier $3.5 million seed round. Investors across both rounds include Sierra Ventures, Storm Ventures, Dell Technologies Capital, which came out of stealth yesterday, and other unnamed parties.

RedLock is available widely today. Pricing is subscription-based, based on the number of workloads the system is monitoring.