Spotify has taken a tip from Snapchat with its new feature for sharing music via scannable images. The new Spotify Codes feature creates a unique barcode and album cover image for every song, album, artist, and playlist. Scan these Spotify Codes with the new camera in the Spotify app’s search bar to instantly play that music. 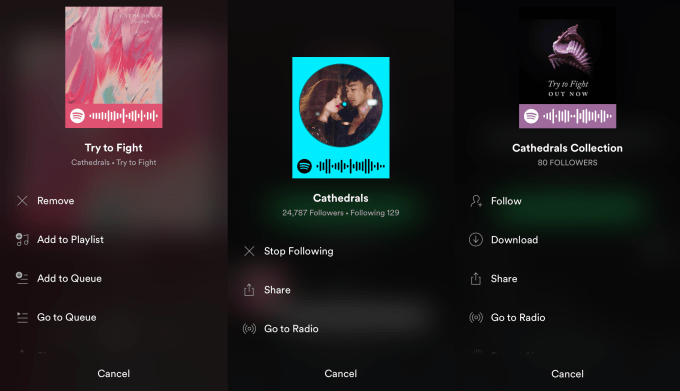 Spotify Codes could make it easier for friends to share music with each other and artists to promote their work. After receiving a tip from reader Moshe Isaacian, we reached out to Spotify for info, and the company said it will share more details on Monday. [Update 5/8/2017: Spotify Codes are now officially rolling out.]

To pull up a Spotify Code, just tap the “three dots” button on the right side of the screen while playing a song, or looking at an artist or playlist. To scan one, go to the search bar, tap the camera icon then hover the camera over a code on a phone, computer screen or printout. You also can upload a screenshot or photo of a Spotify Code to scan it when you see it shared in another app like Instagram or over text message.

You can try it yourself by scanning the code for this new song by sultry indie dance band Cathedrals: 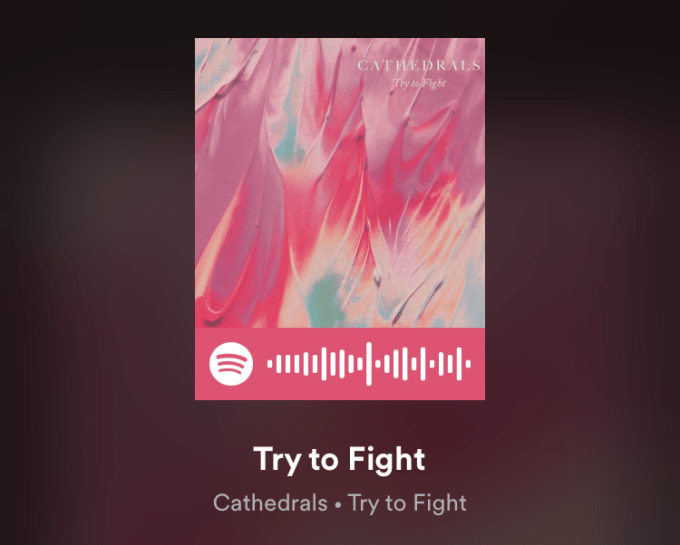 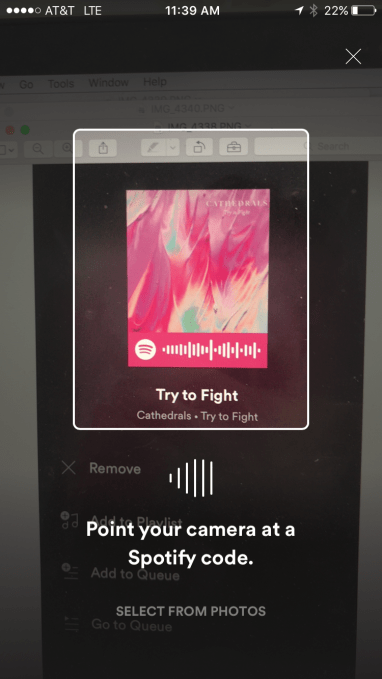 Now if a friend is listening to a song and you want to hear it too, you don’t have to get them to fish out a link, open a messaging app, send it to you then you open it in your browser before it deeplinks into Spotify. They tap the dots to show the code, you scan with the search camera and you’re listening. This is even more important since Spotify ditched its in-app messaging Inbox in February in favor of shortcuts to share via SMS, Messenger, WhatsApp and other chat apps.

Meanwhile, you can imagine artists printing vinyl stickers with their Spotify Codes instead of just their band name. Whereas a complicated Spotify URL would be unsightly and complicated to type in on mobile, the camera and soundwave-stylized codes look good and are easy to use.

Spotify Codes also could be a constant visual reminder around the web that you could be listening to on-demand music. Similar to how Facebook colonized the web with Like buttons, and Snapchat’s Snapcodes wound up as profile photos on Twitter and elsewhere, Spotify Codes could work to promote the streaming service itself, as well as the music to which they’re linked.

This kind of viral growth strategy could prove important to Spotify as it races Apple Music, Amazon, YouTube, SoundCloud and Pandora to turn radio and MP3 listeners into streamers. Considering how Apple and SoundCloud have copied Spotify’s wildly successful personalized playlist Discover Weekly (that TechCrunch suggested it build back in 2014), we’ll see if other streaming services make their own scannable song codes.