The KeyOne is a device from an alternative timeline where BlackBerry didn’t completely whiff and miss the touchscreen revolution. In that parallel universe, Biff Tannen wasn’t elected president and nobody forced devoted thumb-typers to abandon their beloved QWERTY keyboards. It’s tempting to imagine a history where the device arrived on the scene in time to save BlackBerry’s hide.

As it stands, the device is an unabashedly niche product. TCL, the Chinese electronics manufacturer that now owns BlackBerry’s branding rights in much of the world has acknowledged as much in the lead up to the handset’s release. But while it’s easy to write off the return of the physical keyboard as a bit of nostalgic pandering, it’s not worth writing off entirely.

TCL has the hardware know-how, and BlackBerry’s been quietly doing its thing on the software side of things, while you’ve been off living your life. The company’s been focused security and productivity apps – the far less sexy side of smartphone software, but one that could help the brand rekindle some IT department love down the road. 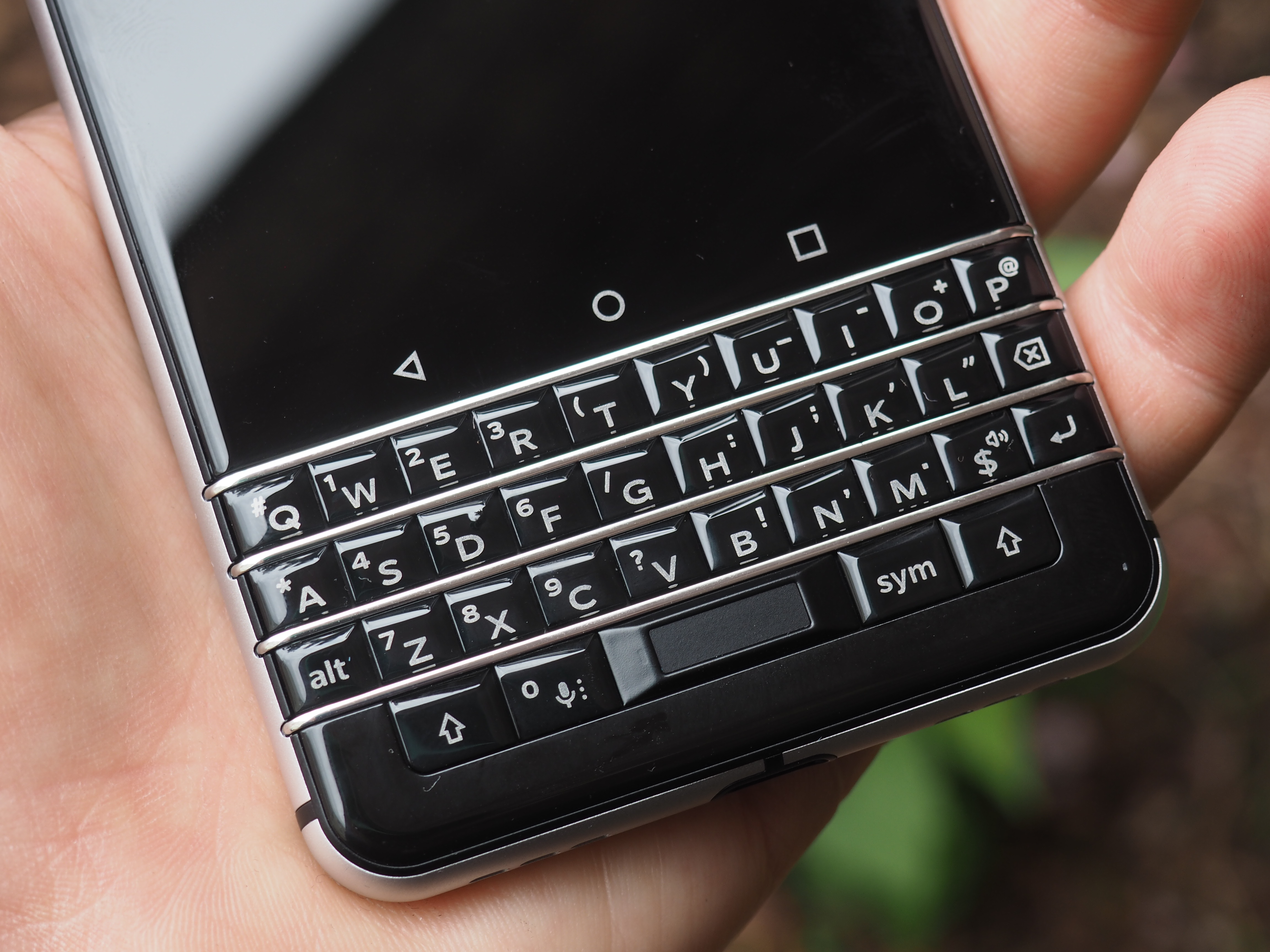 BlackBerry would like security or productivity to jump to mind when you think of the company. But who’re they kidding. It’s the keyboard. Always has been, always will be. “BlackBerry thumb” was a thing suit-wearing business people used to talk about semi-earnestly. Look it up. Here’s a thing on WebMD. A BlackBerry without a keyboard is like a ThinkPad without the pointing stick. Sure, the things exist in the world, but what’s the point, really?

Since the dawn of the iPhone age (or since BlackBerry finally acknowledged it as such), the company’s been trapped in a limbo between touchscreen and the keyboard, never quite managing that golden ratio between the two overpowering design elements. The KeyOne’s compromise is a stout keyboard paired with a 4.5-inch display – full size, but small by today’s standards.

The result is something tall and skinny, with a height that falls between the iPhone 7 and 7 Plus. And with the keyboard squished in the lower quarter of the handset, the whole thing is top heavy when typing. It feels like a pretty key design flaw in what’s an otherwise pretty nice piece of hardware. Though TCL did clearly put some thought into space saving techniques here – most notable the clever inclusion of the fingerprint reader in the keyboard’s spacebar.

As for the keyboard itself, it takes some retraining – or maybe detraining – to get back up to speed, unless you’ve somehow managed to jump from on QWERTY keyboard to the next lo all of these years. I’ll admit that I once attempted to hold out from the touchscreen onslaught, genuinely excited when Motorola released that first Droid with a slide out keyboard.

I’ve long since lost those thumb typing skills, however, as I suspect many have. And my fondness for the physical keyboard has faded along with it. I attempted to get myself back up to speed in the time I had with the KeyOne, but never managed in any sort of meaningful way. I’m sure I could have gotten a better hang on things had I stuck with it a bit longer (all of the TCL reps I’ve spoken with claim to have mastered it quickly), but at the risk of sounded nihilistic about the whole endeavor, what’s the point really? 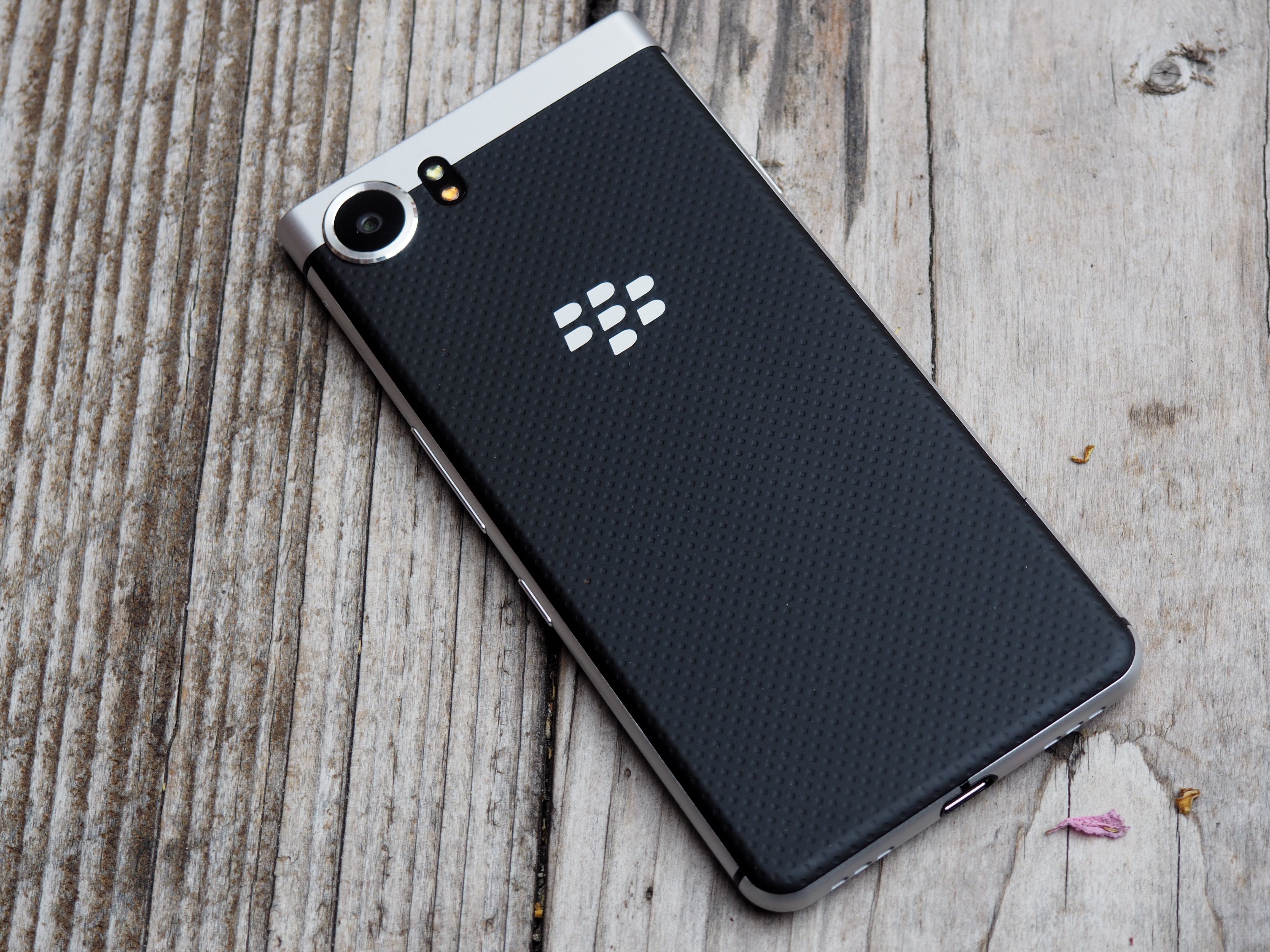 Still, you’ve got to hand to the team at TCL for designing a surprisingly good looking phone. Honestly, I was impressed by what they’d managed to do here the first time someone showed me the then-Mercury (still like that name), back at CES.

The phone marries classic BlackBerry design elements with a more modern form factor quite adeptly. It’s a bit nostalgic, but not overwhelmingly so like the “new” Nokia 3310. The black soft touch backing plays well with the rounded corners and silver band up top. Even the camera ring bump on the rear is striking.

There are small touches on board as well that will prove familiar to longtime BlackBerry users, like the convince key on the side that can be associated with a wide range of frequently used apps and functions. I like to have mine launch Spotify. Bixby be damned.

It’s a hell of a lot better looking than the last two DTEK devices produced on the BlackBerry banner, and it gets points for not looking exactly like every other damn phone on the market. Of course, that non-standard design language adds up to some strange compromises, like the row of touch buttons (including home) that sit between the display and the keyboard. I found myself annoyingly hitting the spacebar every time I was trying to hit home.

Software as a service 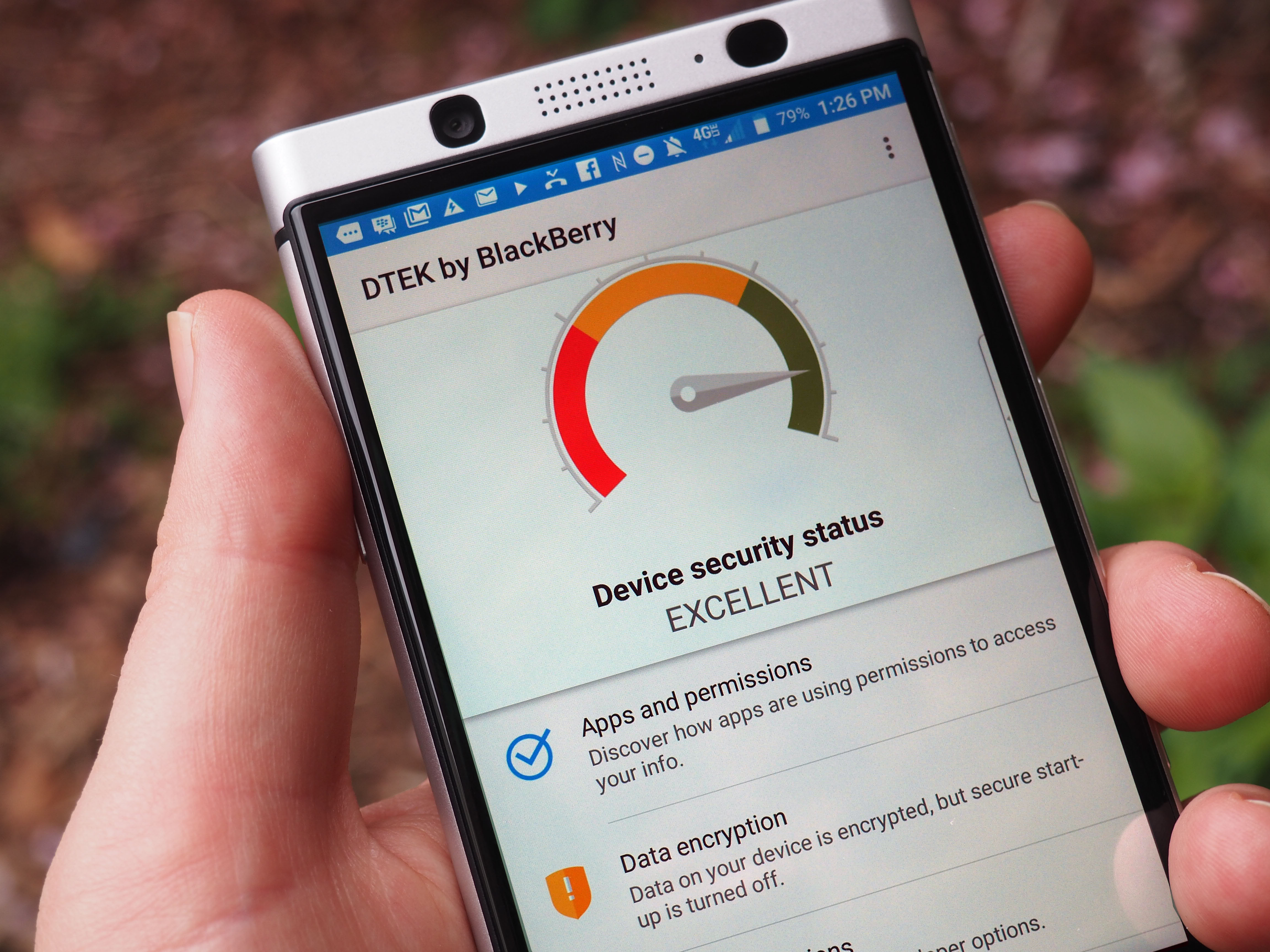 Branding aside, here’s where BlackBerry the actual company still runs the show. The company has kept the fire burning all these years on the software side. The company finally accepted some small dose of reality in 2015 when it embraced Android for the first time with the Priv.

Since then, the company has refined its take on the ubiquitous mobile operating system, which, at present, looks mostly like Android, albeit loaded up with proprietary apps, which run the gamut of usefulness. BBM is here, of course, for those who’ve held onto their numbers. DTEK, meanwhile, is a relatively recent addition that offers a snapshot of your phone’s security status based on a variety of factory.

Hub is a piece the company’s been offering for some time. It aggregates all of your various messaging applications into a single stream. It’s a bit like a notification center, only with more context and actionable information pulled from emails, phone calls, texts and social apps like Facebook. There are nice little touches throughout, like Privacy Shade, for those with sensitive information (or who are just supremely paranoid), which blocks out all but a small portion of the screen to maintain privacy with messages.

The BlackBerry flavored OS also performs some backend security features that help make it one of the most secure Android handsets around, which may well make it a strong candidate for IT departments looking for an alternative to the usual suspects.

The key to success 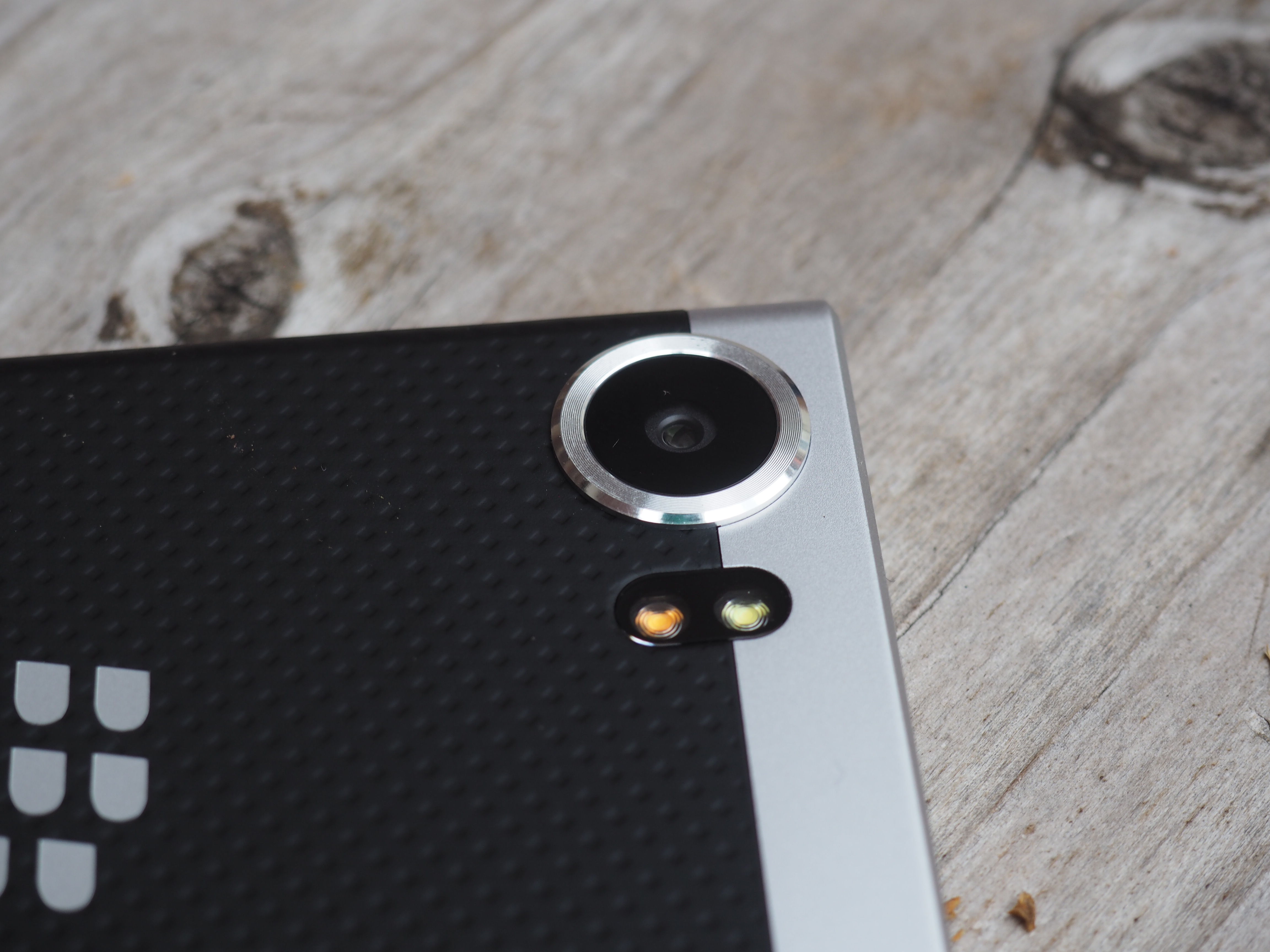 The KeyOne is the kind of phone you want to like. At very least, it’s the most compelling piece of hardware to arrive from camp BlackBerry (or what’s left of it) in recent memory. The company has made a nice and unique phone that marries current design trends and classic BlackBerry iconography in interesting ways, and yes, the keyboard is back.

The handset’s battery life is solid and the camera is capable taking good shots. The processing power is a bit lacking compared to other flagships (the company says this is, in part, due to battery concerns), but you probably weren’t planning on running VR on the thing, anyway, right? BlackBerry has also been doing some interest things on the software side mostly out of the public eye.

But it’s hard to ignore the sneaking suspicion that the ship sailed for BlackBerry long ago. If some equivalent version of the KeyOne had arrived in time to take on the earliest iPhones and Android handsets, perhaps we’d be living in a very different timeline. As it stands, however, the world has moved on to touchscreens and a bring your own device model. And the KeyOne feels like an interesting thought experiment in what might have been.