Facebook gets a lot of flack for just reinforcing your world views in its News Feed echo chamber instead of challenging your opinions. That’s because you choose exactly which friends and Pages to follow, so liberals might skip Fox News or Breitbart while conservatives avoid The Atlantic and Huffington Post. But Facebook’s newest feature could bring a wider range of sources to your News Feeds.

Today TechCrunch spotted  a “Topics to Follow” box in the News Feed that lets you swipe through a range of themes like Theater, Horror Movies or Photography. Tapping “Follow” brings you to a dedicated feed for that theme populated by a collection of Pages that publish about the topic. You can tap through to see all the Pages you’ll then see public posts from in your main feed. 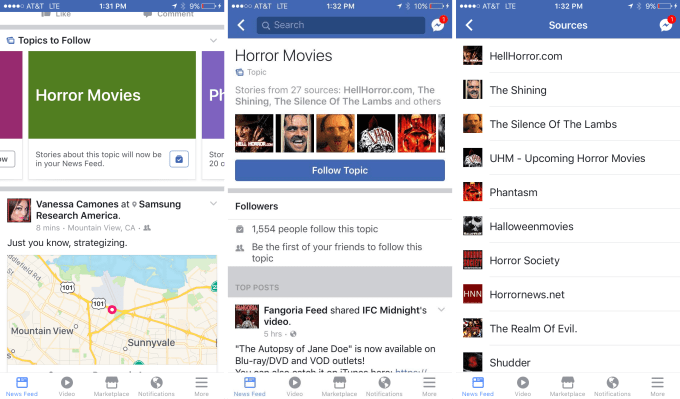 Facebook confirms this is a new “small test,” and a spokesperson provided this statement:

“We’re testing ways for people to subscribe directly to topics in News Feed so they can see more stories about topics they like. In addition to following specific Pages, this is a new way to follow the general topics you’re interested in.”

If the feature proves useful, it might get rolled out more widely. But it could also be scrapped if people find it confusing or unhelpful.

For now it almost seems that Facebook purposefully strayed away from controversial or polarizing topics. The most incendiary one I saw might have been “Ocean Science & Conservation.” But you can imagine how the feature might work for topics like “Donald Trump,” “Healthcare,” “Refugees,”  “Taxes,” “Terrorism” or others. By pulling from news sources across the political spectrum, Facebook could expose people to contrarian views that might make them think twice about believing everything they read, question the bias in their preferred sources and understand how their fellow citizens perceive news.

Facebook CEO Mark Zuckerberg has disputed the prevalence of filter bubbles, citing a study by Facebook from 2015 that showed 23 percent of users’ friends are of the opposing political affiliation, and nearly 29 percent of News Feed Stories contain views that conflict with a user’s ideology. 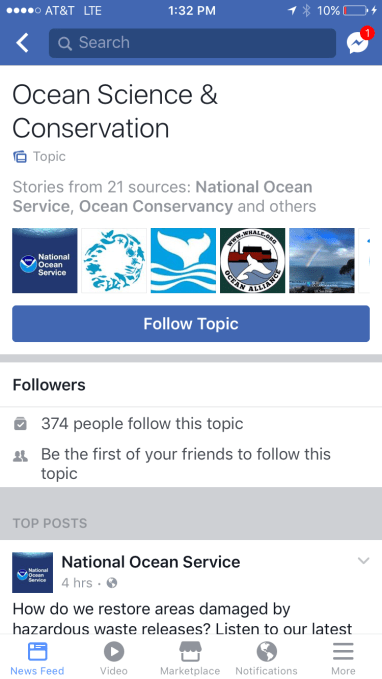 Yet Zuckerberg has become more receptive to this criticism over time. The new feature aligns with a solution he outlined in the 6,000 word humanitarian manifesto he published earlier this year. It cites entrenched opinions fostered by hyperbolic media as another big problem beyond fake news.

“Our goal must be to help people see a more complete picture, not just alternate perspectives . . . We must be careful how we do this,” Zuckerberg writes. “Research shows that some of the most obvious ideas, like showing people an article from the opposite perspective, actually deepen polarization by framing other perspectives as foreign.”

Instead, he proposes something similar to the Topics to Follow feature. “A more effective approach is to show a range of perspectives, let people see where their views are on a spectrum and come to a conclusion on what they think is right,” Zuckerberg suggests.

One issue is that people might feel duped if they suddenly see a contrarian perspective from an outlet on the far end of the political spectrum that they didn’t realize they’d followed through a Topic.

Twitter tried something a few years back, allowing you to follow a Moment so you’d see tweets about that topic from a range of people without having to find and follow them individually.

All the fake news and filter bubble controversy surrounding the election hasn’t slowed Facebook’s growth, according to its successful earnings report yesterday. Monthly active users are up 17 percent since Q1 2016, which is faster than it’s grown since 2013. Still, it needs to constantly find more ways to keep people coming back to the decade-old News Feed, like taking the work out of tracking their interests.