If you’re a big fan of some more mid-core or hardcore games on your smartphone, you might periodically get a reminder to pop in the game to do something. But that requires booting up the game — and it may also require digging through a labyrinth of menus to figure out what you’re trying to accomplish.

Blackstorm Labs is trying to make the process of getting into that game seamless by booting it instantly from a messenger, but now it’s also trying to take away some of that tedium to handle more of the administrative elements of a game — like knowing when to log back in — with an AI gamebot that lives right in Messenger. Think of it as a more robust notification system that tells you when big things are happening in a game (like a reward timer is expiring or a friend is asking for help), with additional context and the ability to page through multiple options right within the notification itself.

“The way we see it, it’s not just a way to notify people, it’s a way to have a mechanism for having a conversation with players,” Blackstorm Labs co-founder Ernestine Fu said. “A player can complete a wide range of different actions within a couple seconds. The player doesn’t have to open up the game to do that. If you think about how people use Facebook Messenger, you can see a lot of people switching between chat messages. Being able to blend that into someone’s daily life, we see that as a more natural behavior.”

It’s starting off with the company’s first big HTML5 game called EverWing, a kind of bullet hell fantasy shooter that lives in Facebook Messenger and is built around the kinds of social concepts you might expect with a bigger online game like World of Warcraft. It’s more lightweight — it exists within Messenger — but it’s trying to emulate that same feeling of bringing players together to accomplish joint tasks. One example recently launched is Boss Raids, where players in a group cooperate to try to take down a larger enemy in their sessions for larger rewards.

Blackstorm Labs is trying to have a notification system that seems more adaptable and even more conversational. Here are a couple of things it’s geared toward: Players can get updated when energy is refilled for their Boss Raid sessions; it can send messages for group power-ups when someone shares a special ability; and narrating the quests, with updates to describe the challenges and progress of those quests. This all seems like table stacks for an online game like World of Warcraft that has in-game managers for all these things, but the goal of all this is to have all this functionality baked inside a bot that can handle complex tasks to keep the tedium away from a player and get their attention when something fun is available.

“At the end of the day we want users to focus on the most exciting aspects and offloading the stress around setting alarm clocks,” Fu said. “You need to just manage all those timing for quests, things like Boss Raids energy and refilling that, and be able to just focus on the best experience from playing the game. Users are constantly jumping between different apps and having only seconds in the day when they’re standing in line at a coffee shop to respond to a friend on messenger or send a quick text. They’re not gonna open up an entire game, but to quickly play the game in those short moments throughout the day, that’s a way you can continue to collect coins or go on quests or help defeat a monster boss or do these things in the few spare moments.” 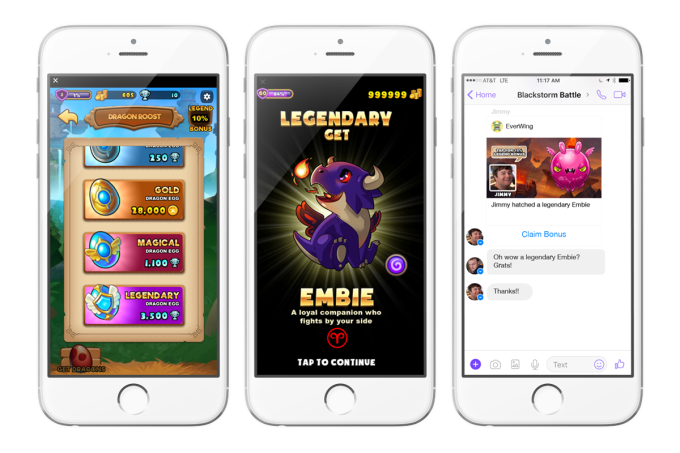 EverWing is getting another feature that allows people to share in the process of unlocking more powerful rewards by spending their in-game resources. Called Group Shopping Sprees, players can share their rare gets in a group, which enables an increased chance of getting those rare items for a short while within Messenger. The thing to note here is it’s again a more context-rich notification that gets users engaged with a more robust heads-up on what’s going on in the game.

Blackstorm Labs — which has raised $33.5 million — started as a company that’s trying to build a sort of post-App Store world for developers. Given the fidelity and demands of a game, it makes sense to start there as a big showcase as to how the technology can quickly get a big app up and running in a lightweight fashion. And bringing all these kinds of features to an in-stream messenger bot is just another example of the kind of potential empowering developers within these new platforms, and the ideas on which they can execute.