Back in 1888 in Rochester, New York, George Eastman founded Kodak. Four years later, 200 miles down the road in Schenectady, New York, Thomas Edison and some pals founded General Electric. The two 19th-century industrial giants chugged along for more than 100 years, but GE is still rolling along with a market cap of over $250 billion and Kodak is a shadow of its former self with a market cap of $466 million, much of its camera and film business flushed down the disruption pipes of late-20th-century digitization. The question is, how did GE manage to avoid the same fate?

Earlier this month, the company invited me to tour the GE Global Research Center in Niskayuna, New York, just minutes down the road from the plant Mr. Edison built in Schenectady. In fact, it was Edison and his partners who opened the lab in 1900, just eight years after launching the company. Perhaps the company’s founding fathers saw the need to continually reinvent itself, or maybe it was just Edison’s obsession with experimentation.

Whatever the reason, 117 years later the lab is a sprawling campus tucked into the beautiful rolling hills of New York State, packed with 2,000 smart people looking to the future of industrial production, whatever form that will take. While the world goes digital, there are some fundamental things that remain very much in the physical realm — like airplane engines, train locomotives, nuclear power plants and gas turbines.

GE has not watched helplessly as Kodak seemed to do as disruptors slowly (and then very quickly) undercut much of its economic base. The company seems to inherently understand that if it doesn’t continually reexamine itself, it could end up like Kodak. So it looks to the future, where data and the digital world intersect with the huge industrial products it’s been building for the last 125 years.

Shifting to a digital world

The world is in the middle of a massive shift with data at the center. If you doubt this, look at Tesla as a quintessential example of a modern data-driven organization. Tesla is in the car business, but Elon Musk recognized from the beginning that there was an inextricable connection between the data coming from the car and the physical vehicle itself. As Tesla collects that data, it can build a better, smarter, more efficient car — and that just feeds off itself over time in a virtuous cycle.

GE recognizes a similar connection between the data coming from the industrial machines it builds and sells. As sensors get smarter and cheaper, the company can begin to build new business models based on its detailed understanding of these machines, both from an engineering and design perspective, as well as what the data tells them about how that machine is behaving.

To give you a sense of the breadth of GE’s industrial reach, Danielle Merfeld, VP at GE Global Research says, “GE currently has about $2 trillion of assets currently installed around the world across various industries. This gives us tremendous access to system and process know-how that is critical to [our] success.”

Merfeld added that when you combine the digital and physical, powerful things can happen. She says it all starts with the deep understanding the company has about how those physical assets work in the world. “We are not layering digital on top of our physical world, and not replacing our physical world with a digital understanding of it, but actually combining the digital plus the physical to get more than a sum of the parts we could get with background or expertise with either one.”

Taking it to the edge 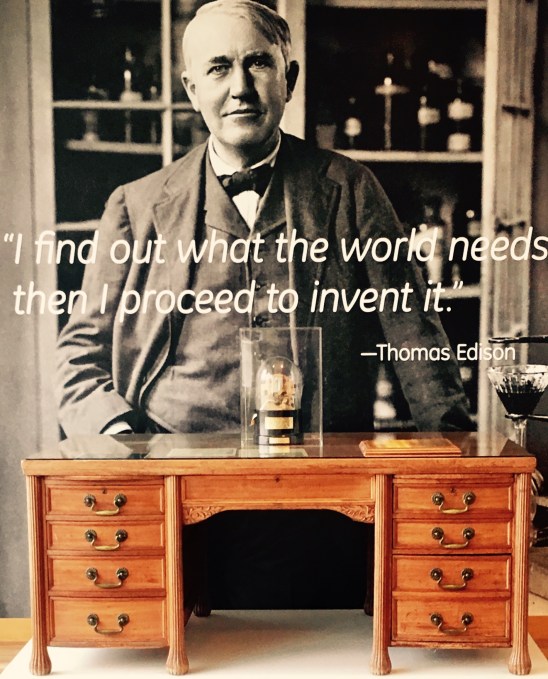 For GE and the Global Research Centers — there are four sister labs located throughout the world in addition to the one in New York — this manifests itself in the form of bold experimentation. That means looking at the technologies that are just beginning to bubble up on the edges, and working on ways to incorporate that future tech into GE’s industrial products.

Some of the company’s most ambitious projects are taking place in the appropriately named Edge Lab, which opened in January this year, where they are working on a revolving set of experimental technologies. The ones they are currently working on include augmented and virtual reality, robotics and blockchain.

“The purpose of the Edge Lab is to explore technologies at the edge of feasibility to show what’s possible,” says Ben Verschueren, Edge Lab growth leader. He says they take those experiments and combine them with GE’s domain knowledge to figure out how to incorporate them into the company’s product set.

The lab is meant to be a living, breathing entity to the extent that the projects exist for a finite amount of time and the members involved with each project are brought in based on their expertise and only for a limited period — the life of the project. That means the lab staff will be shifting and changing over time as the projects change.

“Once we’ve discovered a mission and decided on its purpose, we grab the right technical experts for that mission, bring them into the lab for a period of time while they go through and deliver what we need for that mission. Then they return back [to their original position in GE] and we move onto other programs,” Verschueren explained.

During a tour of the Edge Lab, and throughout the day at GE Global Research, I saw some of those experiments.

One involved using HoloLens, the mixed reality headset from Microsoft, to train people how to use ultrasound machines and locate the correct organ. The thinking is that in rural areas it can be difficult to find trained professionals to run these machines, and augmented reality could act as a teaching device.

For starters, you put on HoloLens and attempt to pick up a virtual ultrasound probe and move it around until you identify the correct organ based on a prompt. For example, it might show you the heart and the liver and you need to select the liver. If you get it wrong, you get feedback through the device that you chose the incorrect one.

Eventually, the team hopes to provide a similar level of feedback working with the actual probe while using the HoloLens to provide a virtual training environment. It’s worth noting that GE sells ultrasound machines, so if they can get them into areas that normally wouldn’t have them and train personnel without a specific medical background to use them, presumably they could sell more of them.

Another idea involves mixing robotics, virtual reality and streaming data. The thinking is they can put a robot in a dangerous place like on an oil rig or wind turbine in the middle of the ocean. Instead of sending a person by boat over rough ocean to do maintenance, a human safely ensconced on shore can control the robot in virtual reality and direct the repairs.

The way it works is you put on an HTC Vive headset with a controller in each hand. As you enter the virtual world, you can see a representation of the robot along with the two controllers. One of the controllers controls the robot’s movement. The other gives you access to a virtual iPad, from which you choose a tool from a menu of selections: “Drive”, “Teleport” and “Arm” modes. Drive lets you control the robot’s movement. Teleport controls your movements inside the virtual world and the arm lets you control the robotic arm to undertake repairs or pick up debris (or whatever needs to be done).

All of the tasks and programs I saw during the tour have a goal of eventually using these advanced technologies to enhance and improve what GE is doing in the physical world with its big machines, or understanding why a particular technology might not work (at least as the experiment presented it).

The company hopes that by continually investigating the latest technologies across their collection of global research centers, it can avoid the fate of its manufacturing cousin down the road in Rochester. One thing is clear, they are not sitting around waiting to be disrupted. They are continuing to look ahead, to assess the newest technologies and to search for the next great ideas, just as Thomas Edison was doing when he started the company 125 years ago.