Ozobot, a golf ball-sized toy robot that helps kids learn to code, will be available in the form of Guardians of the Galaxy and Spider-Man characters as of this summer. Evollve, Inc., which makes the Ozobot, has previously offered character skins from Disney’s Marvel Avengers, including Iron Man and Captain America.

The startup’s CEO Nader Hamda said: “We want to inspire kids to learn to create with technology and not just to consume it. Licensing helps us engage with a mass population and connect with kids who may not already have an interest in technology.”

Ozobots can follow the lines that kids draw on white paper with regular markers. Certain colors send a command to the Ozobot to spin, speak or flash lights. Kids string together lines like they would write lines of code. The toy robots can work offline, but users have the option to control them through the Ozobot mobile app. Within that app, users can write programs to control their own, or each others’ robots.

The company’s Guardian of the Galaxy Starter Pack and Spider-Man Starter Kit will cost $59.95. Each pack includes an Ozobot Bit (the basic robot), 2 character skins, a book of coloring and coding activities, markers, stickers, a USB charging cable and Marvel-themed “pop-outs.” They will launch officially at Disney’s D23 Expo on July 14 in Anaheim, Calif. 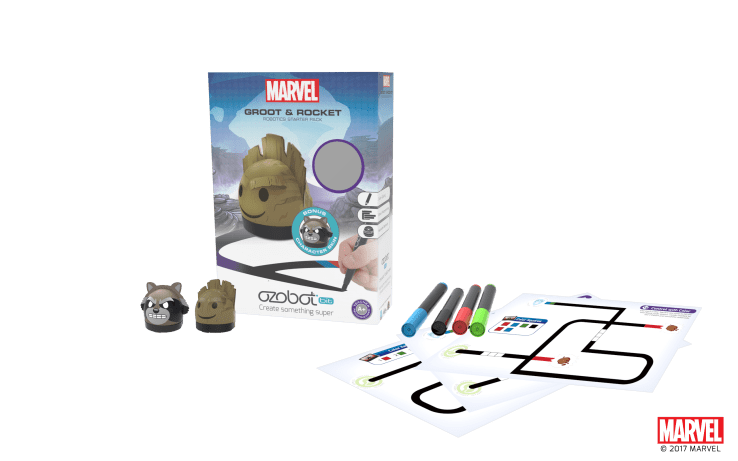 While common in the toy industry, licensing has not been the preferred strategy among venture-funded edtech startups. Ozobot peers and competitors like Dash & Dot, Makeblock, Cubetto, Goldieblox and Roominate have stuck to their own homegrown brands.

But licensing is working for Evollve, Inc. The company has sold 1 million of its Ozobots already, and is working with about 5,000 schools in the U.S. directly, as well as hundreds of others in South Korea and France, Hamda said.

Ozobot also recently brought in two new C-suite execs: Kim Salzer, who was formerly the CMO of Hyperloop One, and ex-Anki Chief Creative Officer Joby Otero. They are now working at Ozobot as CMO and chief product officer, respectively.