Last year was a challenging one for the Tor Project, the non-profit organization beyond the anonymous global network. Prominent developer Jacob Applebaum stood down following allegations of sexual mistreatment, an ugly saga that resulted in the appointment of a new board of directors and the introduction of policies aimed at preventing similar incidents in the future.

Despite those goings-on, the Tor Project’s business is better funded than ever. The organization, which operates an anonymous web browser and instant messaging client among other software, just revealed its latest financial figures (for 2015) which show that it raked in nearly $3.3 million. That’s up from $2.5 million in 2014 and it represents its highest year of income to date.

Much of that capital is tied to numerous state-related grants, and in 2015 they collectively accounted for 86 percent of all incoming revenue, according to filings. That’s a huge chunk, for sure, but it marks an improvement on 2014 and 2013, when government-related income accounted for 89 percent and 95 percent of Tor’s income, respectively.

“Income from individual donations and other non-government things is higher, and also a higher percentage, in 2015 than 2014, but it’s still in the 10-15% range. We have more work to do,” Roger Dingledine, Tor Research Director and President, wrote in a blog post.

“Tor’s budget remains modest considering the number of people involved and the impact we have. And it is dwarfed by the budgets that our adversaries are spending to make the world a more dangerous and less free place,” he added.

Cognizant of the issues of a dependency on government programs, Tor ran a fundraising campaign for donors in late 2015/early 2016 which raised over $200,000. Given the dates — the campaign concluded in January 2016 — the full figure raised wouldn’t have been included in the organization’s 2015 tax returns, if any at all. Cautioning that end-of-year cut off dates can make annual reports misleading, Dingledine said the organization is “doing ok” on funding.

Concern Tor’s reliance on government grants kicked off that crowdfunding push, and specific incidents have raised concerns. In 2015, the organization claimed that Carnegie Mellon University was paid $1 million by the FBI to unmask Tor users. The university issued a weak denial at the time, but the attack itself was later confirmed in filings related to a ‘dark web’ criminal case. Documents showed that CMU’s research was used by law enforcement authorities, as Motherboard reported, but neither the FBI nor the university would confirm any financial arrangement.

Today, Tor has around two million users, according to its own data. Usage spiked in 2013 around the release of Edward Snowden’s NSA leaks — Snowden himself used Tor to connect with reporter Laura Poitras to initially share the government information he possessed. Interestingly, Tor usage has increased fairly consistently in 2017. That could be in line with the arrival of new U.S. President Donald Trump and, among some policies, his administration’s repeal of online privacy rules. A Tor spokesperson declined to comment on possible reasons behind that usage boost. 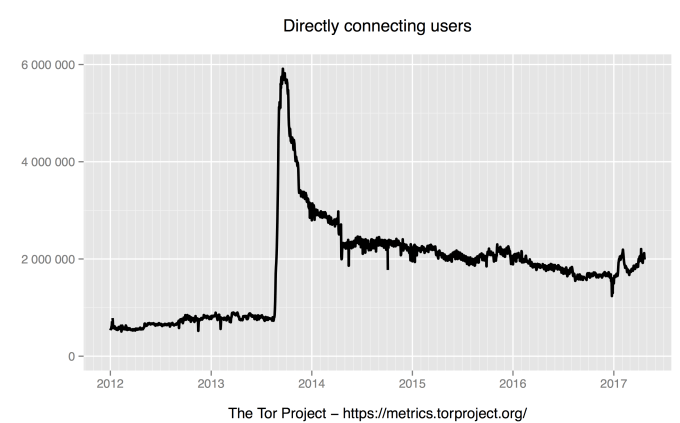