Desktop Metal revealed pricing and other details for its 3D printers today which can make objects out of hundreds of different alloys including steel, aluminum, titanium and copper. In terms of quality, the parts produced by Desktop Metal systems compare to injection-molded items, says the startup’s CEO and cofounder Ric Fulop.

While metal 3D printers have been around for decades, they’ve been limited in terms of materials, speed and accessibility. That’s, in part, because metals have such a high melting point. It’s not as easy to shape them as it is to shape plastics, for example.

Desktop Metal calls its core technology “microwave enhanced sintering.” The company’s printers put down layers of metal and ceramic powders that are mixed in a soft polymer. The cartridges and alloys that work with the printers are made by Desktop Metal and other major providers in additive manufacturing. Once a mixed-media item is printed, it goes into a furnace where it is rapidly cooked. Heat burns off the polymer. Gases are filtered by charcoal.

Meanwhile, the metal is fused together but at a temperature that won’t make it melt and lose its shape. Wherever ceramic was laid down in a printed design, metal remains separated and doesn’t fuse. The pieces created by Desktop Metal machines can be separated by hand.

Earlier metal 3D printers using lasers and high heat have been used in aerospace, defense, industrial and automotive manufacturing, especially, and to create medical devices, implants and other small parts. They are generally owned and operated by deep-pocketed corporations like GE, for example, which invested in Desktop Metal via its venture arm, along with GV (formerly Google Ventures), BMW iVentures, Lowe’s and others.

GE actually acquired two companies in this space last year, Arcam and Concept Laser for over $1 billion combined. Other players in additive manufacturing who offer metal-printers are 3D Systems, Renishaw, EOS and Stratasys. But even with all that activity, according to Fulop, metal 3-D printing only comprises $1 billion worth of the $1 trillion in metal items that are manufactured and sold annually worldwide.

The broader additive manufacturing industry generated just $5.1 billion in revenue last year, according to Wohlers Report 2016. Many manufacturers would like to adopt 3D metal printers for speed and safety reasons.

Metal fabrication with traditional processes like injection molding, can be noisy, create welding fumes and exhaust, and require the use of lots of chemicals by workers, who are also subject to injury from operating heavy machinery. Additive manufacturing can shield workers from much of what’s dangerous there. 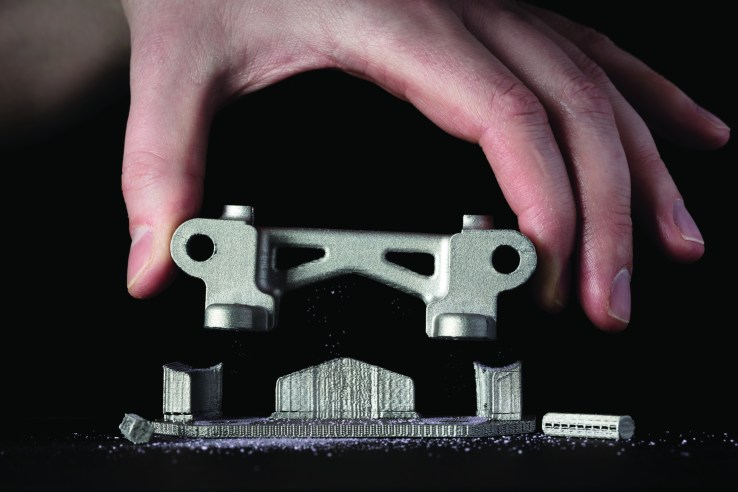 Desktop Metal has devised its new Production machine to work rapidly and safely to mass-produce metal parts, without requiring special engineers to man the machines all the time. The company says its Desktop Metal Production unit works 100-times faster than earlier available machines, producing up to 8,200 cubic centimeters of metal objects per hour.

More excitingly for research labs, designers and engineers, Desktop Metal has also created a Desktop Metal Studio machine to be used in an office setting, without a need for respirators, external ventilation, large gas tanks to power the machines or any other factory-style accommodations.

Both the Desktop Metal Studio and Production systems make metal objects that are ready for use without post-processing. Their different supports and pieces can be taken apart by hand. Most 3-D printers, whether for metal or polymers, require some filing, milling or other tooling to take off surplus materials and smooth rough edges on a printed object.

Correction: A previous version of this story said that GE acquired SLM Solutions. GE bid on SLM but the deal never went through.