Facebook’s new Chat Extensions lets you use Messenger bots in group chats so you can watch a sports game’s play-by-play together from theScore’s news ticker bot, collaborate on building a Spotify playlist, figure out which hotel you want to stay at with friends and book it via SnapTravel or get a consensus on booking a flight through Kayak. OpenTable, the NBA, Food Network, WSJ and other developers are also launching group bots today. Apple Music is coming soon. 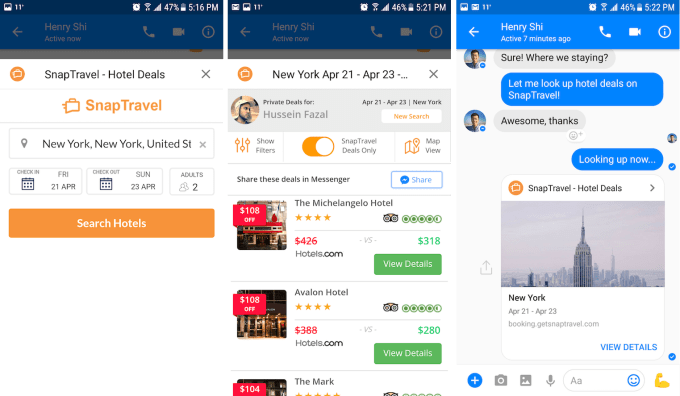 TechCrunch reported last month that Facebook would launch these group bots today at F8. Until now, bot experiences were just you and the bot. But that puts a ton of pressure on the bot to seem human. Chat Extensions pose them more as assistants or tickers rather than conversation partners, better matching what’s feasible with today’s technology. 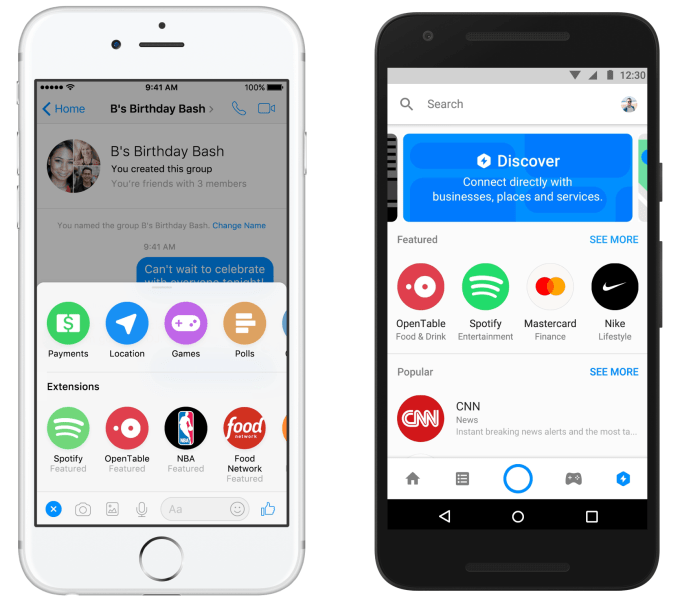 The second big piece of bot discovery news is the launch of a Discovery tab on Messenger, where people can see their recently used bots, browse bot categories, see trending experiences or search for specific bots. Users will be able to check out a preview screen about what a bot does before starting a conversation with one. Developers need to submit a form with this preview information to be included in the curated tab. 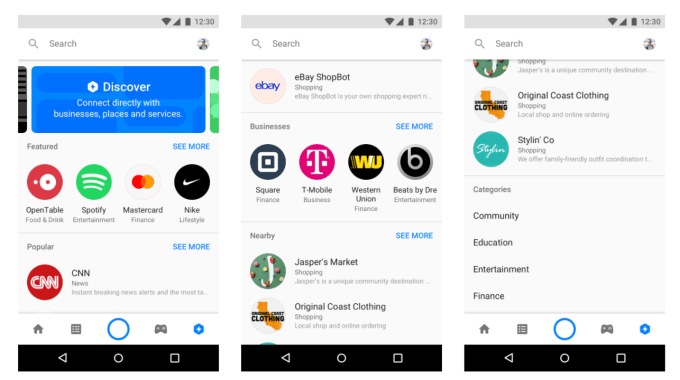 Finally, Facebook is expanding its M Suggestions feature that uses AI to scan your conversations and recommend Messenger features to use. M will now start to suggest bots from outside developers that could serve a need that users are talking about. For example, if someone says “we should order food,” M could recommend delivery.com’s bot for making an order.

Together, these could give bots on Messenger more traction through virality in groups and merit via Facebook’s choices of what’s best. That could attract more prestigious developers to the platform. Facebook launched Messenger bots last year, but users had a tough time finding good ones; many bots disappointed people because they relied on inadequate AI, or they were confusing to use. Onstage today at Facebook’s F8 conference, Messenger head David Marcus said “I’m glad we called it a beta.”

Facebook has been trying to improve bots with the option to navigate via menus instead of text commands. And at F8, Messenger also launched QR codes for the physical world that open a specific experience inside a bot, as well as more features to help businesses. Meanwhile, bots like SnapTravel, which has done $1 million-worth of hotel bookings inside Messenger, prove that in-chat commerce is starting to work.

With today’s updates, bot developers will have good reason to fight through the churn rates and lack of user understanding. With 1.2 billion users on Messenger, there are plenty of people who could try their bots.