Sisense introduced a new tool today called Pulse, which uses machine learning to trigger an alert when it detects results outside of normal parameters for a particular metric.

A user can set a Pulse alert to monitor a metric or KPI such as sales activity or win rate. The machine learning component watches the chosen metric and learns over time what’s normal. When it detects an anomaly, it sends an alert to the user. What’s more, it can determine how the metric has changed over time, so it doesn’t continue to trigger alerts for the new normal.

This approach is part of Sisense’s mission to simplify business intelligence, company CEO Amir Orad told TechCrunch. Last year his company introduced an Amazon Echo Skill to allow users to ask Alexa about Sisense data. Pulse gives those users access to data without deliberately going into the tool to seek it out.

“This is a direct continuation of what we’ve been doing — [this notion of] Sisense everywhere where we can push insights into the hands of users. Pulse is another step in that direction. We’ve started with the ability to assign alerts on interesting stuff,” he explained.

In the conventional way of using a tool like Sisense, you fire it up and look at the data. As part of this process, you may see something that’s particularly interesting or crucial to you. You can set a Pulse alert and let the system warn you when a metric is out of whack. Orad says this is flipping the way people have typically used business intelligence tools. 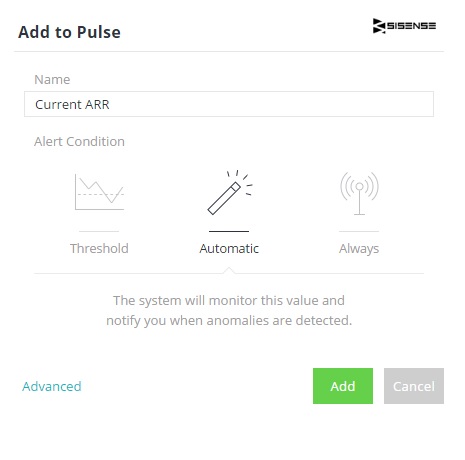 “The value is that, traditionally you are going to your computer and asking a question and getting a report. It’s more interesting when it’s getting pushed to you,” he said. It’s certainly easier, especially when the tool is using machine learning to look at the historical numbers related to this metric.

“You plot a curve over time and see what is typical in the curve. When you get out of that curve, and there is a significant difference, you get an alert,” he said.

For now, Sisense is concentrating on the power of the alerts to let users know when something has changed significantly without having to explicitly ask the tool. “We see our mission as simple: simplify complex data so that business users can get value everywhere all the time. The only way to do that is by putting actionable intelligence in their hands,” he said.