Rakuten is getting into the Airbnb for business sector after it invested SG$4 million ($2.8 million) in Singapore-based MetroResidences.

MetroResidences was founded in 2014 by James Chua and Lester Kang and it matches corporate employees needing to rent for a month or more with home owners who seek tenants. It is currently active in Singapore, but has plans to expand into Hong Kong and Tokyo using this funding, which is the startup’s Series A, and takes it to $3.5 million from investors to date.

Chua and Kang started out with an Airbnb clone, but they pivoted to business users when they found corporate users and HR managers were increasing getting in touch. Likewise, on the real estate side, they realized that home owners were happier letting their properties out to professional tenants and for longer stretches than services like Airbnb usually cater to.

Kang told TechCrunch in an interview that clientele is typically multinational companies who bring staff to Singapore on short-term project work for a few months. The service is also caters to newly arrived expats. Typically, these workers are put up in a hotel until their local rental is arranged, but MetroResidences says it is replacing the hotel part of the stay for them.

Beyond the cost saving from avoiding months in a hotel, Kang said that clients also appreciate the convenience. That’s to say that they can pick a property located near their offices, or in a particular part of the city if preferred. 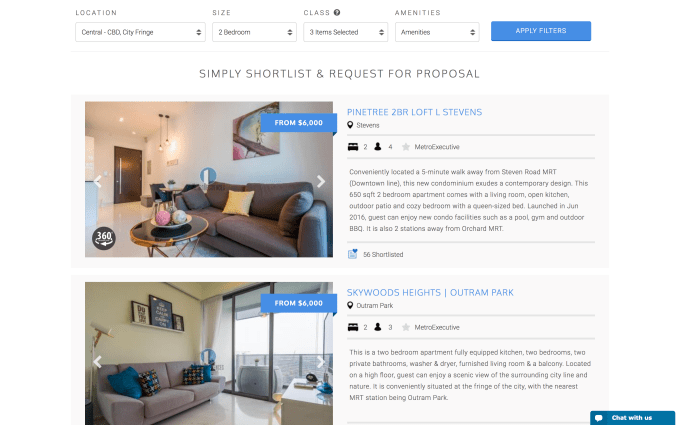 MetroResidences doesn’t charge a listing fee, instead it takes a cut of the booking which can vary from 10 to 25 percent. Kang said that typically property owners will make 30-40 percent more revenue through the service than usually a regular lettings agency. The company didn’t disclose revenue, but it did say that it has rented out over 115,000 room nights from more than 800 corporate clients to date.

There is other newer competition in the space. Airbnb, which pioneered the short-term let concept and is valued at $31 billion, offers a corporate service — “Airbnb business travel” — that could be used for similar purposes. Kang explained, however, that it doesn’t cover many services — such as laundry, washing, ironing or hotel-style concierge — and that’s where he believes his company has the edge.

“They [Airbnb] are getting serious with business-ready apartment program,” he explained. “But with large corporates, you can’t tell your guests to go pick up the key from under the flowerpot.”

MetroResidences, then, is essentially doing the flowerpot key collection and simplifying things, whilst also being very much more selective about the kinds of properties that it offers on its platform.

Rakuten is best known for its retail footprint in Japan, where its services include e-commerce and banking, but the company also has a travel business. Kang said he sees synergies between his business, Rakuten Travel and the central, corporate Rakuten company.

“Rakuten’s infrastructure and network in travel segment will be very, very helpful, particularly if we can break into the Japanese market,” he explained.

On whether this deal might be a precursor to an eventual acquisition, he was less certain.

“I wouldn’t rule that out as a possibility [in the future] but right now our goal is to regionalize the platform and get into more markets.” 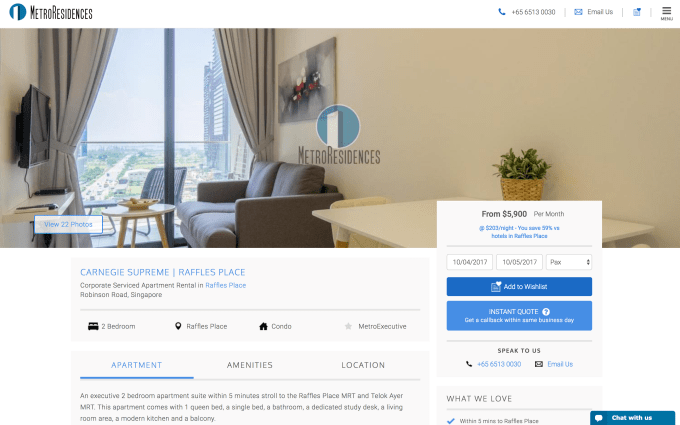 One issue impacting short-term home lettings in Asia is regulation. Recent legislation in Singapore made renting accommodation for less than six months illegal without the approval of authorities, although the rule isn’t yet being enforced with vigor and there is talk of a loosening of the specifics.

“Some clients will be concerned, others won’t be,” Kang said. “We’re transparent and happy to tell them [of the laws because] they see the value in our product.”

Tokyo, meanwhile, has been mulling shortening its rules on Airbnb-like stays, which currently stands at a minimum of a month.

“We will be perfectly legal in Tokyo and Hong Kong,” Kang said, adding that he expects to launch in at least one of the cities before the end of 2017. He isn’t saying which one will be first, however.