Saleswhale, a Singapore-based startup that uses artificial intelligence to let companies automate their sales emails, has raised a $1.2 million seed round.

We first wrote about Saleswhale last August while it was in the Y Combinator program in the U.S., and since then the team has returned to Singapore and developed the business. Its product, called Engage, allows companies to set up virtual email accounts which send communicate with sales prospects the same way a human employee would.

It isn’t a full on sales team replacement at this point, rather it is focused on handling inbound leads or reigniting stale prospects. The AIs can use charts, figures and PDFs and when a lead becomes warm again they can hand it over to a designated employee to take things further. 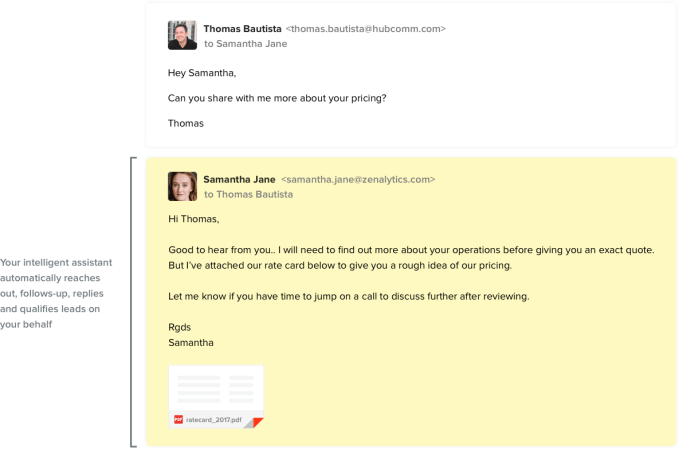 Engage is available for a base rate fee, after which additional cost comes per usage. There’s a free 14-day trial to allow new users to test the product without that initial commitment, but Saleswhale has removed the free usage option it had in place last year, co-founder Gabriel Lim confirmed. The company isn’t saying how much revenue it pulls in, but Lim said that base fees account for around 40 percent of income with activity-based fees representing the rest.

Lim founded the company last year with fellow Singaporeans Venus Wong and Ethan Le in response to the frustration of the repetitive nature of training new sales staff, many of whom move on to new jobs. The team has since added two engineers to its ranks, and Lim said it plans to hire another three people who will cover sales and also more engineers. The current team are all engineers, so adding a dedicated sales team makes plenty of sense for the business now that it is maturing.

Most of the customer leads that Saleswhale itself gets are inbound, and mainly from tech startups, but Lim said the company has begun to hold initial discussions with firms in verticals such as real estate and automotive loans to diversify. But, right now, he told TechCrunch, the company has a “huge backlog” of interested customers that it is onboarding to its platform, which already counts “dozens” of paying customers. While he didn’t give specific names, Lim said that, since February 2017, Saleswhale has helped its customers close $130,000 in deals with a further $1.5 million-worth of leads in the pipeline.

This seed money will go towards those expansion and hiring efforts. Lim said the company will look to close a Series A round in around 12 months. Interestingly, this investment is a first seed deal for Monks’ Hill Ventures, the $80 million fund that is primarily focused on Series A companies, so Saleswhale may already have a major contributor to its next round depending on how things go.