When we first wrote about Chowbotics, their salad-making robot, which was then just a prototype, stirred a bit of controversy. The company promises to bring nutritious dining options to offices that don’t have a big cafeteria and budget to employ full-time chefs. But, like other food automation technologies, their robot, Sally, threatens to put a number of people out of work if it replaces prep cooks in restaurants.

This week, we interviewed Chowbotics Executive Chairman Rich Page, who worked alongside Steve Jobs pioneering personal computer design at Apple Inc. and as a co-founder of NeXT Computer. He and Chowbotics CEO Deepak Sekar gave TechCrunch a first look at the finished robot. Sally will soon be installed and start dishing out the greens in venues from co-working spaces to hospitals.

What makes Sally different than a vending machine, Page explained, is the use of sensors and various moving parts inside. “A vending machine will just drop things out,” he said. “There’s significant motion in here. The primary weight sensor controls the amount Sally dispenses of each ingredient. Users’ choices determine which ingredients are used at all.”

Chopped, whole and liquid ingredients are stored in individual tubes, and the system knows which is in each, whether it’s a dressing, vegetable, cheese or other toppings. The tubes are filled at least once a day by people. The system sends alerts to customers when any ingredient is running low and needs a refill. 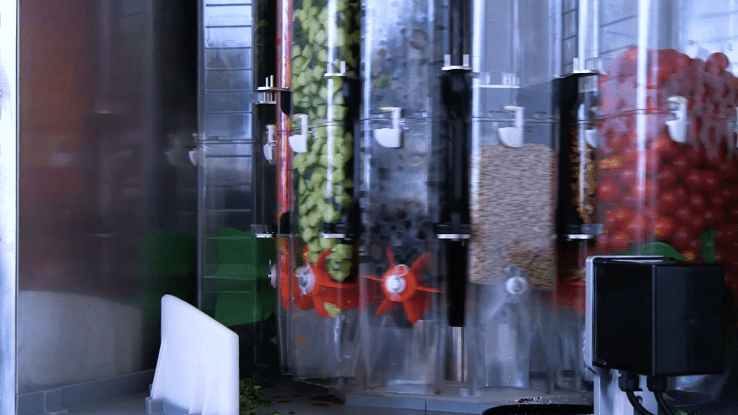 Making sure the robot’s design was compact enough, and durable enough to be used repeatedly in office and retail environments was a major challenge the company had to overcome. According to Sekar, the startup has been fielding inquiries from hospitals, which like the idea of salads prepared hygienically by robots, rather than under a “sneeze guard” at a traditional salad bar.

Does the startup worry about “stealing jobs”? Page says the company, and others involved in food automation and robotics, shouldn’t hold back on innovation: “There’s always some trade-off between existing jobs and new jobs. This causes some frustration in the world. But in general the world goes farther, and things get better for everybody.”

He reflected on the early days of his career when typing pools were replaced by word processors, and spreadsheets migrated from paper to a program called Visicalc that ran on the Apple II. Page said, “You can argue that put some people out of work, but it created an increase in productivity, too.”