Wonder, the incredibly stealthy new gaming company, has quietly created a signup page for information and perks related to its plans for global domination of the gaming market from its Los Angeles headquarters.

The company is calling its new campaign the “Alpha Program”, and folks that are interested can get updates on Wonder’s product, provide feedback, and get perks and invites to events involving Wonder.

At face value, it wouldn’t appear all that interesting.

It’s a shame, because Wonder founder Andy Kleinman, a serial gaming entrepreneur and executive, wants to do something pretty (forgive me?) wonderful.

Kleinman has set himself the Herculean task of building a gaming company that is by and for gamers. Everything he’s told me about what Wonder’s plans has privileged gamers as the first and only audience for the products and services that he’s looking to build.

It’s all going to begin with a new device and the ecosystem that gets built around it, Kleinman says.

While people are most curious about the device, Kleinman views the gizmo (which sounds like a cross between Nintendo’s Switch… and… shrug?) as a gateway to what his company wants to be… which is nothing less than a new multimedia brand a la Apple.

In conversation, Kleinman constantly refers back to the halcyon days when Apple product launches would draw lines of hundreds of would-be buyers to stores.

“We are building a company with an objective,” says Kleinman. “The way I think about it is this company was built by gamers and geeks and people who care about gamer culture.” 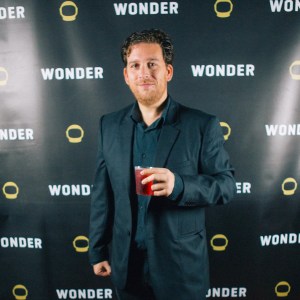 The objective for the company is to build a community and a true connection for it users, Kleinman tells me. To him, that’s about more than just the device. Wonder, he says, will combine all of the functionality someone associates with a media player, phone and gaming console, he says. “It’s an entertainment device, it’s a gaming device… we are seeing this as a way for us to position ourselves that this isn’t just another phone,” said Kleinman.

To this luddite, that doesn’t sound all that much different from everything else on the market, but Kleinman speaks so fervently and ecstatically about his vision, that it’s hard not to want to come along for the ride.

You could, however, imagine a device that allows gamers to play their games both on the couch and on the train. One that allows them to stream to their platform of choice automatically, or on an entirely new platform, viewable from any device.

The gaming world is fragmented, and gamers are asked to constantly choose or pay the price of having it all. Wonder may look to fix that with a flexible, all-in-one and one-for-all-gamers device.

Even the folks who have signed on to back the company are insanely accomplished.

Nolan Bushnell, the brains behind Atari; Hayao Nakayama, the former president of Sega Enterprises; John Pleasants who was the chief operating officer of Electronic Arts and former chief executive of Playdom; and Pieter Knook, who previously was an executive at Vodafone are all backing the company. Oh… former NBA commissioner David Stern is investing, too.

Those individual investors are joined by institutions like 8VC, Greycroft Partners, and Third Wave Digital.

Wonder’s executive team is equally impressive. Kleinman himself has been wildly successful as an entrepreneur. He founded his first company at 17, back home in Argentina. That company, a music website called Empe3, was sold in 2004 at which point Kleinman began his foray into gaming.

In 2007 he founded the social gaming company Vostu, and later worked for Zynga and Playdom before becoming the chief business officer at Scopely.

Also on the executive team at Wonder are Tyler Carper, a senior executive at Cyanogen who’s serving as the company’s Chief Technology Officer, Rafi Bagdasarian, a former senior vice president at Sony, Trevor Walsh, who was an early executive at Facebook, and former vice president of strategy at Machinima Matthew Cohen. 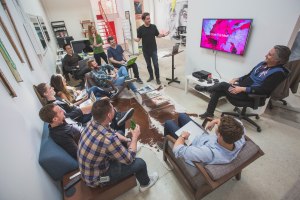 The Wonder office in Los Angeles

Scopely’s success — and its approach to gaming — may provide some clues for the broader mission at Wonder. The company has built a market leveraging popular cultural touchstones like The Walking Dead — and it’s the same intertwining of science fiction, fantasy, and comics culture (hello, fellow nerds) with the cultural juggernaut of Hollywood that has created billions of dollars in value for companies — and is ostensibly the market Wonder wants to mine for its own future growth.

Sitting at the nexus of the entertainment industrial complex in Los Angeles affords Wonder a unique position to think about gaming in a context that extends beyond the actual gaming device — or game development.

“When you think about the geek-gamer culture, there’s no company that’s been able to build that connection to users,” says Kleinman. “I’m a gamer. We’re working on a series of products that really identify with how I do things.”

So the device, where everyone has been focusing their attention, is only the first step. “As we continue evolving beyond this initial first device that we’re launching… the innovation is going to be guided by what our community thinks is exciting.

As for the capital it takes to launch a new hardware startup, Kleinman remained mum about how much he’s actually raised. But he’s got deep-pocketed backers who seem to be ready to go the distance with him.

So in between games of Grand Theft Auto, Yahtzee with Buddies, and NBA 2K, Kleinman is continuing to hatch new schemes for his business.