Social media can be hard.

I’m not speaking hypothetically here. There have definitely been days where I’ve thought, Shoot, it’s been way too long since I’ve posted on Instagram or Twitter — and then completely failed to post anyway because I had nothing to say. Maybe I would’ve done better if I’d used Post Intelligence.

I’ve seen plenty of other social media dashboards and assistants, but Post Intelligence’s assistant, which it calls Pi, offers the most direct advice that I’ve seen. After you connect your Twitter account or Facebook page, it creates a stream of links that you could consider posting. (Today, its first few suggestions for me were about Batman and Trump, which sounds about right.)

Once you’ve drafted a post, Pi will predict how well your post will do, and it might suggest what time to schedule it. It also offers analytics to see how a post did, and there’s even a marketplace to make money through sponsored posts.

Post Intelligence co-founder and CEO Bindu Reddy told me the product examines engagement data from Facebook and Twitter. Then it uses artificial intelligence to surface the topics that will do well with your followers, and to predict the performance of a post based on things like topic, length, sentiment and keywords. 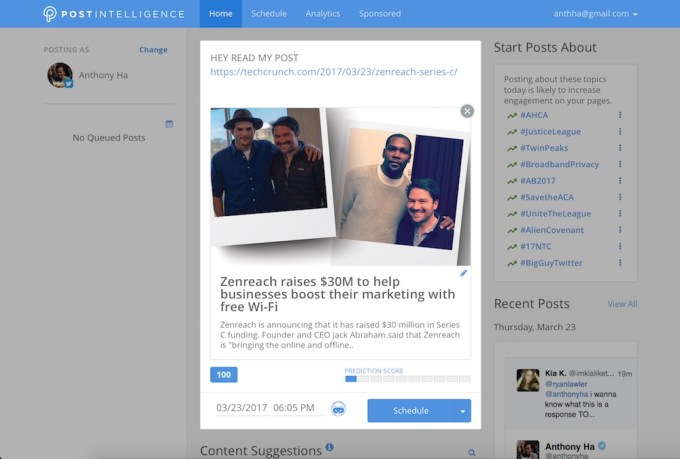 She emphasized that Pi isn’t actually telling users exactly what to say, and it’s not just focusing on whatever is currently the most popular — after all, sharing the exact same thing as everyone else isn’t necessarily a recipe for success.

“Instead of just these top five TV shows or 10 top news articles, we might highlight 1,000 different things,” Reddy said. “So I’m actually very positive that it gets rid of that echo chamber that we have.”

Post Intelligence was created by the same company behind social advertising platform MyLikes. Reddy said the technology is “completely new — we rewrote the whole infrastructure” and that the team is now focused solely on Post Intelligence.

The current version of Post Intelligence is available for free.