Gas is the biggest cost for airlines. The easiest way to reduce these costs? Don’t use gas at all. That was the pitch from Wright Electric, a startup building a commercial passenger plane that runs on batteries and can handle flights under 300 miles. These short-haul trips make up 30 percent of all flights and is a $26 billion market.

Today Wright Electric gave its first preview to the world at Y Combinator’s Demo Day, where Silicon Valley’s most prestigious startup accelerator puts its new companies in front of investors. Wright Electric announced it’s building a 150-seat plane to disrupt the 737 market. It’s struck a partnership with budget British airline EasyJet, which could put its design in the air. And it even showed off its own electric plane in the parking lot.

“This is one of best hard tech teams I’ve seen,” said Michael Seibel, the head of Y Combinator’s accelerator program. Wright Electric hired a team that had been previously funded by NASA to investigate the potential for electric planes, which its co-founder Jeff Engler says puts the startup years ahead of the competition. 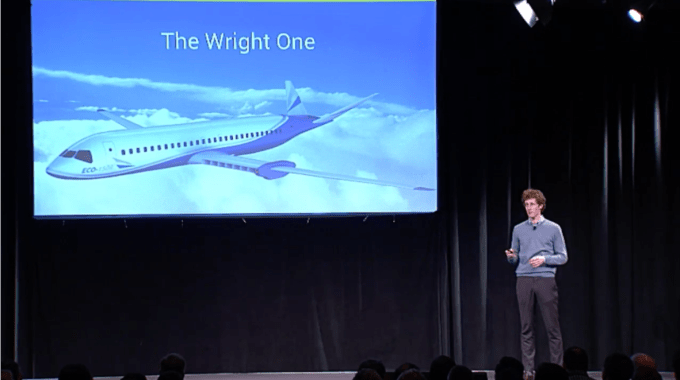 The plan for exactly how the planes will work depends on advances in battery technology. If batteries get a lot better in the next decade it will go all-electric — and if they don’t, it will use a hybrid system similar to a Chevy Volt. Last year Boeing and Airbus sold 967 planes in the 737 style at about $90 million each. Even replacing a fraction of that market could be a big opportunity.

For now, gas will still be necessary for long-haul flights across the country or the world. But Wright Electric’s technology could make jumps like New York City to Washington, D.C. much cheaper, and potentially more environmentally friendly, depending on where the electricity to charge the batteries comes from.

Wright Electric is only a year old and has a long way to go before its planes are operational. The image above is just a mock-up. But with every airline desperate to reduce costs and undercut the competition, it could fly high once it’s off the ground.