For websites we had Google. For videos, YouTube. For products, Amazon. For general reference, Wikipedia. For gifs, Giphy. Well, when VR and AR devices become mainstream, imagine all the new types of content that will be out there to explore. How will we find what we’re looking for in a brave, new, 3D world?

In an interview for Flux, I sat down with Sophia Dominguez, co-founder and chief executive of SVRF, a search engine for VR content, which just launched in open beta.

Sophia discussed why consumers are scared of VR and how she’s planning to knock down the barriers, why the nausea factor is critical in search rankings, how Snapchat will help bridge the gap to AR and why Facebook’s VR privacy policy is pretty alarming. Sophia also revealed the challenges of being a woman in the industry, why building a company in New York is a better reality check than building in the Silicon Valley bubble, why VR zombies are a great alternative to coffee and why trippy VR art is so amazing. 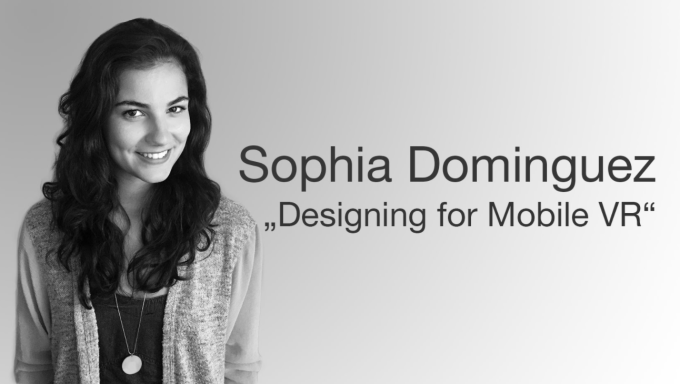 So let’s talk about your company SVRF — you just launched a new product so this is exciting timing. You’ve said that your goal is to bring VR to the masses, and you’re indexing and curating all content on the web, meaning 360° photos, 360° videos and 3D experiences. What does it mean to build a search engine for VR?

SD: So right now we have to index content. We look at specific sites that we know are hosting virtual reality content and either integrate with APIs or do other custom stuff in order to get that content. It’s just a matter of knowing what sites have VR content and eventually one day having enough data around what this type of content is and what it looks like on the developer side in order to crawl the internet for it.

One thing we didn’t realize when we first started was how much bad content there was. There’s all these weird things you have to think about. If you look at content that’s on the web and are like oh this is interesting, but you put it in a headset, it could make someone sick. The way that our ranking works is, would somebody feel comfortable in a headset?

AMLG: So if it’s going to make you vom, indexing goes way down, ranking goes down?

SD: Yes. Sometimes in our Slack channel, we’re sending links around and if someone says I feel nauseous just looking at this, it automatically goes down a point. If you’re getting nauseous just by looking at it on the web that’s not a good thing.

AMLG: Right, let alone in a headset. So for websites there was Google, for video there was YouTube, gifs have Giphy. Do you think SVRF could be the equivalent for VR?

AMLG: How much compatible content is there today? Can you give a sense of the numbers?

SD: In terms of 360° there’s probably 100,000 pieces of content out there right now. In 3D there’s way more, like hundreds of thousands. But to be fair, most of it isn’t interesting. When you think about 3D, if you index a shoe for example, a consumer looking at a shoe doesn’t really make sense unless they’re looking at it in order to buy something. That’s why we’ve been more reserved in terms of how we’re thinking about 3D, but we will begin rolling that out in the next year. It’s different for consumers because people are used to consuming people and their friends and so suddenly when it’s a 3D experience of say — we’re in this audio studio right now, if we index an audio studio then what is someone supposed to do with it? We’re trying to think through what are those scenarios, and not just do it for right now but do it for the next few years so that we map out the entire ecosystem in the best way for consumers.

AMLG: Right. So that example of, you can find a shoe or you could find an audio studio. It seems like it makes sense when you can pull it all together. So if I am going to search I say OK, I want to be in an audio studio, with this person Sophia, with a shoe or whatever. I’m sure there’s a better example, but it’s like the game Cluedo, I’m in the library with the spanner with Colonel Mustard — it’s all the things together. It’s not just the object or the location, and it’s got to be social. So will your search engine be able to do that? Will I be able to search for a full experience with all these elements?

SD: Yes. We’ll be building out our API in order to do that and plugging into social VR or AR applications in order to power content to people. And we’ll let the social part be handled by other companies, similar to what Giphy did with messaging.

AMLG: So part of your thinking is, OK let’s get to the base of the pyramid, to the most number of people. Because at the top with high end, Oculus Rift and Vive, there’s a few hundred thousand users. Below that with mobile VR headsets like Gear and Daydream, it’s maybe in the millions. Then with Cardboard — the $25 cardboard thing that Google sold — tens of millions. With SVRF you’re hoping people are going to be using mobile and desktop to start with, right, which is hundreds of millions. Is that who you’re going after?

SD: Yeah. It’s different than what most people are doing. But when we launch our mobile products in a few weeks it’ll all make sense. We think about our products in a funnel. The first thing we launched was the Chrome extension, which powers a 360° photo to you every time you open up a new tab. To us that was the easiest way to get people to think about 360° content on a day to day basis. And that can funnel into other products. When mobile comes out, we’ll begin understanding more about what makes somebody go into virtual reality and then what makes people share virtual reality content, with the web as the backbone.

AMLG: So the idea with Tabs is, how do we help consumers build a routine around experiencing 360°? And the idea was, we’ll put it right in the browser so they see it all the time?

SD: Yeah. When we were thinking about building an experience that got people thinking about VR or 360° more often, we realized that we’re constantly looking at our computer screens and every time you open up a new tab that’s so much real estate. Technically when you’re in VR you’re looking at a screen all around you. Well what’s the most comparable thing to that? It’s a computer. And how can we tap into that space? And it was like oh wait a tab, that makes so much sense.