Internet accessibility in emerging markets is a huge challenge.

Facebook and Alphabet have spent millions on internet-enabled drones, balloons, and other services to solve the last mile problem of connectivity in rural markets in developing nations, but that solves a problem that affects a smaller population than addressing connectivity in cities.

Meanwhile, a new company called Tizeti, which is graduating from the latest batch of startups to come from Y Combinator, is proposing a simple solution to the connectivity problem… Build more towers, more cheaply, and offer internet services at a cost that makes sense for consumers in the urban environments where most people actually live.

“There’s a ton of capacity going to 16 submarine cables [coming into Africa],” says Tizeti founder Kendall Ananyi. “The problem is getting the internet to the customers. You have balloons and drones and that will work in the rural areas but it’s not effective, in urban environments. We solve the internet problem in a dense area.”

It’s not a radical concept, and it’s one that’s managed to net the company 3,000 subscribers already and nearly $1.2 million in annual recorded revenue, according to Ananyi.

“There are 1.2 billion people in Africa, but only 26% of them are on online and most get internet over mobile phones,” says Ananyi. Perhaps only 6% of that population has an internet subscription, he said. 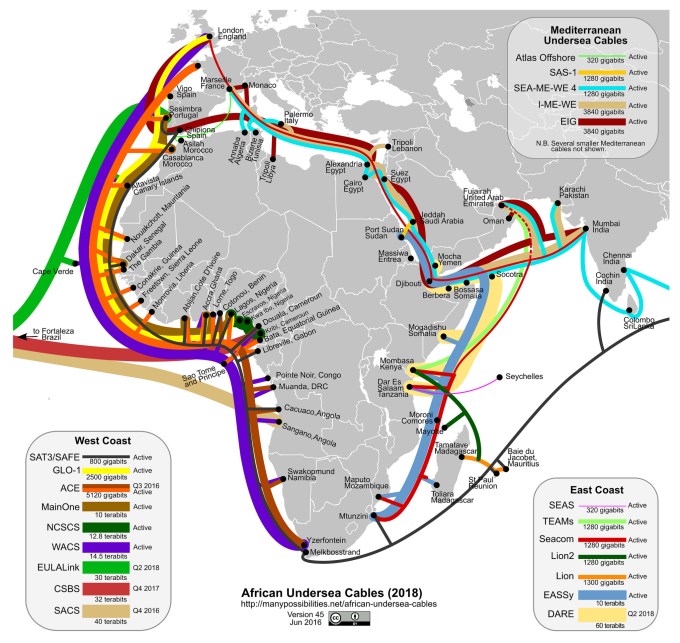 Tizeti is angling to solve that problem in Nigeria by offering unlimited internet access through its wi-fi towers at a cost that he claims is affordable for Africa’s emerging middle class.

The company’s subscriptions start at $30 per month.

Tizeti’s business model wrings cost efficiencies from every part of the development process, he said. The company saves money on siting and development by offering free wi-fi services to the owners of the land where the company builds its 100-foot-tall wi-fi towers. The towers themselves are powered by solar modules instead of electricity from the grid or an on-site generator.

In all, Ananyi says that the 35 towers his company built in Lagos cost roughly $7,000, vs. $17,000 per month if the company was using standard generators.

For the basic service, customers get wi-fi internet at a speed of 10mbps. Typical customers will use anywhere from 100 gigs to 1 terabyte per month, says Ananyi.

While the company’s service is typically offered in the home, it is getting set to debut a new universal hotspot service for anyone with a cell phone. That cheaper plan, can be made available to anyone who has a wi-fi enabled device, says Ananyi.

“It’s for downmarket users who can’t afford the setup costs for in-home,” says Ananyi.  “Anybody who wants to can connect and pay smaller amounts for a day a week or a month.”

For Ananyi, a former Microsoft employee who then went to work for ExxonMobil on some of their deepwater projects off the Nigerian coast, the chance to work on Internet infrastructure was the answer to a larger problem. He and his co-founder Ifeanyi Okonkwo, a former Blackberry employee, initially wanted to do video-on-demand.

“We found out that there wasn’t enough internet,” says Ananyi. “We decided a bigger opportunity was to go after the internet problem itself.”