It was a direct reply, but when the world’s second largest restaurant chain slides into the Trump’s mentions to call him “a disgusting excuse of a President,” people are going to take notice. And screenshot the hell out of it. Billions and billions served, indeed.

McDonald’s has since deleted a tweet reading, “@realDonaldTrump You are actually a disgusting excuse of a President and we would love to have @BarackObama back, also you have tiny hands,” and the apology/excuse/damage control is no doubt forthcoming. But while it was up, the fast food chain (or whoever had access to its social accounts) even went so far as pinning the bold proclamation to the top of its page for good measure. 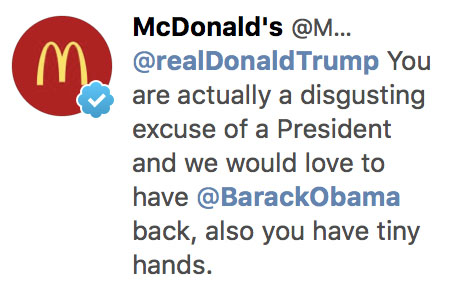 The note has no doubt hit Trump where it hurt, turning his dual loves of Twitter and fast food against him in a way that no mainstream media wonk has been able to do thus far. The future president once famously sought the business advice of the burger chain’s sentient purple felt gumdrop in a 2002 commercial for its now-discontinued Big N’ Tasty burger.

While we await McDonald’s insight into precisely what happened, the bit of Obama love served as a friendly reminder that the former president’s stone-faced press secretary Robert Gibbs now heads up the company’s PR (much to chagrin, one assumes of the health fanatic former first lady).

Officer Big Mac is no doubt already on the case.

Update: As expected, the company says it was hacked. Here’s the latest tweet,