The Snapchatification of everything has resulted in backlash for WhatsApp, prompting it to revive its text Status option while keeping its image-based replacement. The move shows how social apps must quickly react to feedback if they make a false step in modernizing to adapt to visual communication.

In mid-February, WhatsApp removed the feature that let you set an away message, and then gave the Status name to a Snapchat Stories clone. But last week, text Statuses reappeared in the Android Beta version of WhatsApp in the About section of profiles.

Now, WhatsApp tells TechCrunch that About Status will roll out to all Android users over the next week and is coming soon to iPhone. Users can open the About section of their profile to set a text Status, and view other people’s by opening their contact when starting a new chat thread or looking at group chat info. 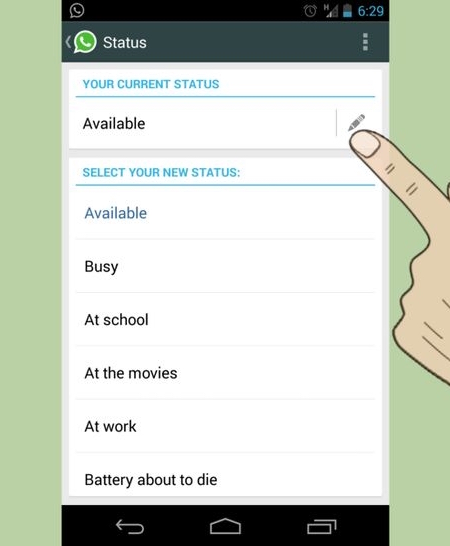 How to change your WhatsApp text Status, via WikiHow

“We heard from our users that people missed the ability to set a persistent text-only update in their profile, so we’ve integrated this feature into the ‘About’ section in profile settings. Now, the update will appear next to profile names anytime you view contacts, such as when creating a new chat or looking at Group info. At the same time, we’re continuing to build on the new Status feature that gives people fun and engaging ways to share photos, videos and GIFs with their friends and family throughout their day.”

WhatsApp’s new Snapchat-style Status stories haven’t received as much blowback from users as Facebook Messenger Day because WhatsApp sticks the feature in a separate tab instead of at the top of the list of active threads. But replacing a utilitarian communication feature with a whimsical content-based one broke the behavior patterns of too many users, so now WhatsApp is giving them both. Both the new WhatsApp Status and Messenger Day provide an obvious opportunity for these chat apps to monetize by injecting ads between friends’ slideshows. They also could limit Snapchat’s growth and prepare the products for a future more focused around visual communication. Yet the launches have led some to believe the features are more designed to fulfill Facebook’s desires than users’. Rapid responses to feedback could keep these utilities from alienating their billion-plus audiences.