Four former reporters and entrepreneurs are attempting to fix India’s “broken” business media landscape and simultaneously prove that there’s an audience — and business — for paying for quality journalism in the country.

Subscription-based media is thriving in the West. The New York Times has seen its digital subscription base swell following the election of President Trump. In tech, The Information, founded by a former Wall Street Journal editor, has thrived with a mix of trend-based reporting and news scoops, while Stratechery, an analysis-focused newsletter/blog from Taiwan-based writer Ben Thompson, has also shown the model to be lucrative.

But this is India, a country where monetizing a product is difficult even if it is supremely popular. Apple sells more iPhones on launch weekend than it manages in India over a whole year, while addictive services like Netflix — far cheaper than an iPhone — have struggled to gain mainstream prominence thus far.

Yet subscription is the vision behind The Ken, a Bangalore-based new media company that publishes a story per day behind a paywall. Access is priced at $108 for overseas users, or 2,750 INR ($42) for those in India.

The site, which also offers $10 per-month and $25/900 INR ($13.50) per-quarter packages, is the most prominent subscription-based media play India has seen thus far. Its coverage is principally focused on technology and business, that’s the domain its founding team has experience in, but there are plans to move into new areas further down the line.

“We don’t want to be seen as just covering startups, that’s a very easy trap to fall into,” co-founder and CEO Rohin Dharmakumar told TechCrunch in a recent interview. “We want to expand our coverage and be interesting enough on a daily basis but also slightly unpredictable.”

The Ken — which is named after an old-fashioned English word for knowledge — is build around its community. Email is the primary communication medium, and the team of 11 takes it in turns to send daily missives to its user base — including those who are registered but not paying — that introduce the daily read with humor and thought. Once a week, the site produces a story that sits outside of its paywall for anyone to read, acting as bait to lure in new subscriptions. 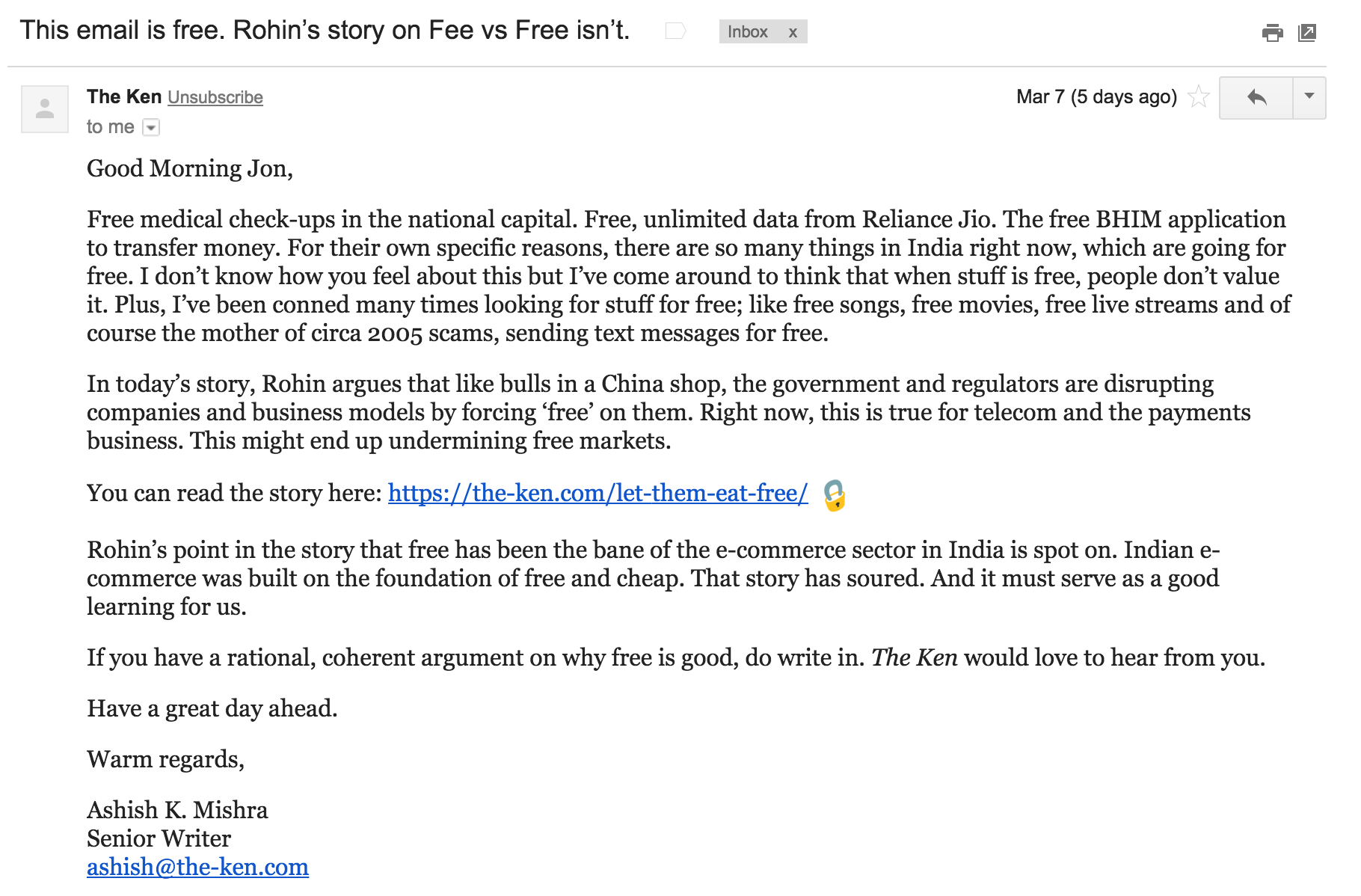 A sample of the daily email sent to readers

Beyond straight-up pay-to-read, The Ken uses other models to help get its writing into the hands of more readers without the need for advertising. It has worked with corporate sponsors who pay to make some of its content available for free without any promotional material or advertising — mobile wallet giant Paytm, for example, sponsored a week-long free pass — while it is in the process of introducing corporate subscriptions, too.

There’s no plan for article-only or daily plans, Dharmakumar explained, because that would dilute the experience and take away from building a longer-term vision and community.

Small disclaimer: I’m one of The Ken’s paying subscribers because, beyond information gathering as part of my job, I’m interested in observing the ways technology is disrupting daily life. Emerging markets — where tech is advancing almost every aspect of everyday living — are a fascination, and India, with its billion-plus population and nationwide diversity, is arguably the country where the impact of tech could be highest. Yet there are few media outlets able to tell this story with clarity, interest and — above all — accuracy.

With respect to that latter point, Dharmakumar explained that The Ken started in response to what he observed to be the Indian population’s general disinterest in media.

“It became very apparent that there was a crisis of business journalism in India,” he said. “People were essentially not reading newspapers, just giving up. And I don’t mean just young people, even experienced investors would prefer to catch up on news via social media.”

“Coverage was dumbed down, biased, and dense — people couldn’t relate to it and couldn’t find value in it,” Dharmakumar added.

Inspired by some of the aforementioned subscription-based media plays — Dharmakumar specifically mentions The Information and Stratechery — the team of four decided it was “time someone did something about this in India,” and they created The Ken. Initially the project started out with postings on social media, before introducing an email-registration-paywall to float the idea of a barrier between reader and subject matter.

Satisfied with what they saw, The Ken then went live to a paying audience.

Dharmakumar isn’t revealing how many readers it has right now, but he said the company has exceeded its own expectations at this point. Indeed, it actually became a profitable business within two weeks of the launch of its website before going on to raise $400,000 from a bunch of reputable angel investors this year. Some of those backers include the founders of notable Indian tech startups Paytm, TaxiForSure and Freshdesk. (Paytm CEO Vijay Shekhar Sharma also backed FactorDaily, another ambitious new media startup we wrote about, alongside other India-based news websites.)

“While $400,000 may not seem like a lot of money these days, it’s a significant amount to build a focused, lean media business, which has also been generating revenue right from day one. As journalists, we’ve seen too many instances of companies losing their focus and fire in the belly after raising too much money too early on,” Dharmakumar wrote in a note to subscribers announcing the financing.

“Business journalism lost the plot on this, many years ago when it started churning out articles that were either incremental, one-sided, dumbed down or dry and boring. We go to great lengths to make our stories anything but,” he added. 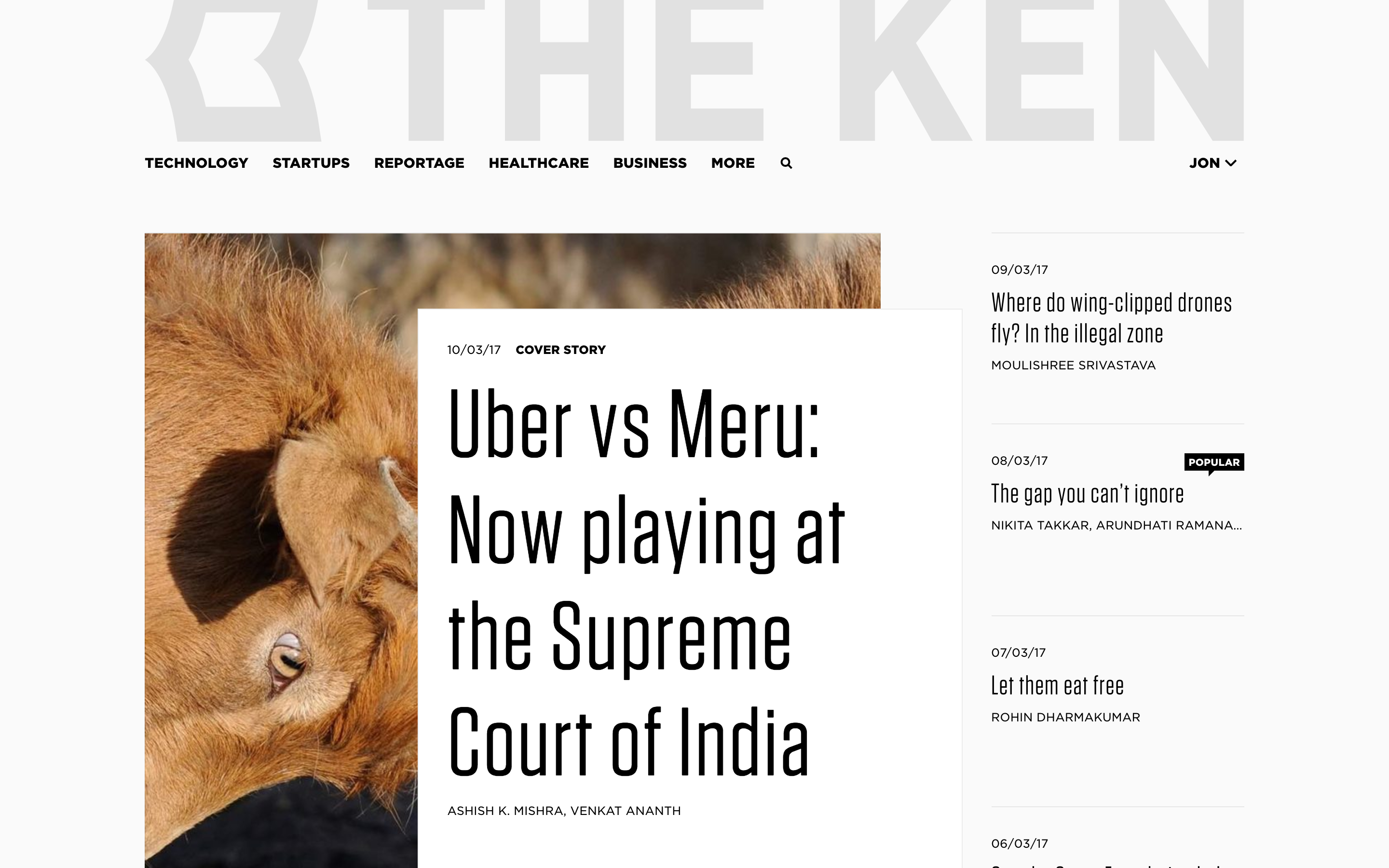 Growing into the mainstream

Despite criticizing the status quo, The Ken’s CEO said the business isn’t looking to rip out the existing media system in India, rather it sees a position working within it.

“We are not attempting to replace traditional newspapers, we are a complement to one,” he said. “People read the news to find out what’s happening, we focus on what comes next, who is doing what, and where is the motivation?”

The company’s course for the next six months is to continue to do what it is doing while growing its audience and deepening its reporting pool. After that period, it will look to new coverage areas it can branch into to give its readership a wider selection of stories and information.

Dharmakumar is also keen to expand The Ken’s readership beyond its initial focus on business professional and tech industry watchers.

“We want to take our stories to younger people who feel business news isn’t for them,” he explained.

First up, apps for Android and iOS will come, which will help expand from those who currently rely on email to access the site and its stories. Other planned features include a comment section for stories and a Slack channel to enable readers to engage with writers directly, potentially to help steer editorial focus or raise potential areas for storytelling.

You can find out more about The Ken by visiting its website here.

Note: The original version of this post was updated to reflect different pricing for subscribers in India and those based overseas.