If you’re into social media and fashion, you may be familiar with LIKEtoKNOW.it. Launched in 2011, the social shopping service lets influencers on blogs and social platforms like Instagram and Snapchat get paid for their work.

Over the last year the company claims to have driven $1 billion dollars in sales for retail and brand partners from over 12,000 influencers.

While we’ve previously written about rewardStyle, the startup responsible for LIKEtoKNOW.it, here’s a brief refresher on how it works:

After a blogger or influencer takes a picture of an outfit or scene, they upload it to LIKEtoKNOW.it and “tag” it with the products in the picture, as well a link to buy it from one of the 4,000 retailers that partner with the startup.

Then, after seeing something they like on an influencer’s blog, audiences access these links and purchase the items featured in their favorite influencer’s photos. The retailer makes a sale, rewardStyle and the influencer get a cut of the profits, and the user gets access to items they may otherwise not have known about.

Operating In a Walled Garden

The whole process works efficiently — except for one pesky middleman that sometimes gets in the way — social media platforms like Instagram and Snapchat.

When rewardStyle first launched, the world of fashion influencers and bloggers was mainly, well, blog-based. So it was easy for the startup to simply give influencers a link that they would pop into their blog post or personal website.

But then Instagram came along — along with its walled garden approach that prevents links to elsewhere on the web. Even today Instagram doesn’t allow users add links to photos unless it is a verified account, and even in that case, links are limited to appearing in 24-hour disappearing Stories and are forbidden from regular posts. So as influencers flocked to the new platform, rewardStyle realized it had to figure out a way to let influencers share “shoppable links” with their audience.

And that’s how LIKEtoKNOW.it was born in 2014. The service lets users create an account tied to their Instagram profile, then every time they “like” a influencer’s photo on Instagram they receive an email with the shoppable link to purchase the item. It’s a pretty innovative way to use Instagram’s API if you ask me.

The first rule of running a company that relies on social media is knowing that you can never sit still. Platforms come and go. Remember when MySpace was one of the most popular websites in the world? And when Snapchat was a niche app for sexting on college campuses? Well Imagine telling your 2007 self that MySpace is dead and that niche sexting app is a public company worth $28 billion. Get the point yet?

So today LIKEtoKNOW.it is announcing its own app, which will let audiences shop content from anywhere on your phone. Essentially the app means it no longer has to worry about its service fitting within the rules of each social platform, or even a new platform that pops up which doesn’t take kindly to links (or API workarounds).

So how is it doing this? Screenshots. 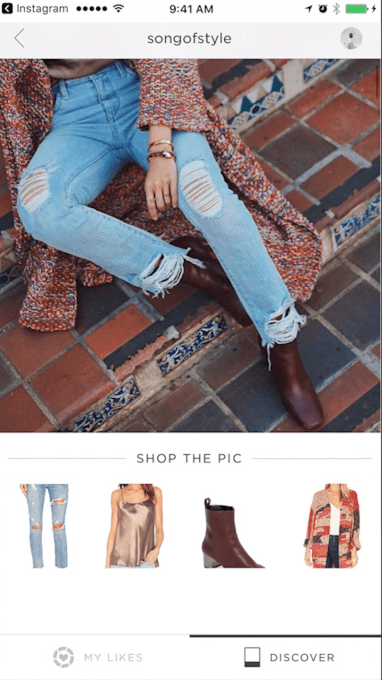 Immediately after taking a screenshot the app will analyze it (it connects to your screenshot album in Photos) and send you a push notification if it can match the image with one of millions of influencer-submitted and tagged photos in its database.

Then, you can open the app and shop the content that was featured in the photo, with both the Influencer and rewardStyle taking a cut of any transaction.

Essentially it’s the same service that LIKEtoKNOW.it fans have grown to love, except it can now be used anywhere across the open and closed web.

Since screenshot functionality is developed and maintained by device manufacturers it’s platform-agnostic.

The startup explained that the app will now let users (both influencers and shoppers) migrate more easily between social platforms. If the next Snapchat pops up tomorrow, Influencers can start posting content on day one, since all their audience has to do is take a screenshot to shop the content.

Interestingly, the startup explained that taking a screenshot of something they want to buy is a habit most of its users already know. With so many different discovery platforms on their phones today, many have started using screenshots as a way to remember then things they really want to buy. “‘Liking’ has become transactional, but taking a screenshot is the most personal form of curation and it is the strongest indicator of purchase intent,” explained Amber Venz Box, President and co-founder of rewardStyle.

The app launches today and is available on the iOS App Store.