With retro phone brands Nokia and Blackberry remerging at Mobile World Congress this year you’d be forgiven for thinking Mistress Fortune was up to her old wheel-spinning tricks again.

And as old tech becomes tech news again, it’s a sign — say some — that smartphone innovation is on the scrap heap. But a commoditized smartphone market offers fresh opportunities if you look at it from a different perspective: sustainability.

European phone company and social enterprise Fairphone, which — for its second ethically minded handset, first released all the way back in December 2015 — is using modularity to enable repairability, designing a smartphone with longevity in mind.

Take a deep breath gadget nerds: Fairphone wants its customers to keep the smartphone for as long as possible — as many as five years.

And if your business goal is sustainability then all of a sudden a saturating smartphone market, and consumer complaints of boring sameness, starts to smell like an opportunity. A chance to disrupt the treadmill of tech upgrades by giving jaded buyers a more ethical alternative that also happens to save them money because the intention is they keep their device for longer.

Just don’t call this a win-win. Fairphone founder Bas van Abel is tired of having to couch sustainability apologetically. “We have to do it!” is his bottom line.

Instead of impossibly shiny devices, Fairphone is bringing a new story to the industry: Products built to last, by visibly present hands. It’s not a new idea but one whose time may finally be arriving in the smartphone space.

After all, what comes after slabs of iterative glass? Perhaps it’s phones that are cherished exactly because of the number of scratches they’ve acquired. Because if you want to have the biggest environmental impact on electronics consumption — well, short of convincing people not to own a phone at all — then getting them to keep a device for longer is key.

Brand value and storytelling is how you differentiate in a space where hardware and software is commoditizing, reckons van Abel. “You differentiate on what you stand for.”

We have a differentiating story — and it’s not on technology.

“The big guys are having a problem differentiating themselves –- because they can’t on technology,” he argues. “So they add an extra camera, an extra this, an extra that. It’s commoditized. What you see is that you get a lot more of the prize-fighters. You get a lot of companies that can do it cheaper. That is a sign that the industry is at a point that it’s been commoditized. The great thing about that for us is that we have a differentiating story — and it’s not on technology.

“That makes it an interesting time for looking into new things like having a modular architecture, repairability, circular economy — things that are also important to a growing group of consumers. That’s one of the strengths of the timing that we have.”

He points out that the current system of technology manufacturing works to wipe away all trace of the workers who make the gadgets — even to the detriment of their health, such as screen cleaning chemicals being discovered to be a serious health hazard.

Another example he points to is the factory worker who tested an iPhone camera with a selfie which was accidentally left in memory instead of being erased — leading to a surge of interest in who she was.

“Our cosmetics and aesthetics around phones is that they may not be touched by someone before they come out of the box. We’ve hidden everyone,” he says, arguing that the biggest challenge to marketing fairer electronics is still raising awareness.

“How can you create responsibility for something when you don’t even know that there’s somebody involved in making it? So what if you actually don’t clean the screen? And it arrives with fingerprints. And you think ‘hey, this thing is made by human beings’.”

That’s where the value of storytelling comes in, of course — re-humanizing products whose manufacturing realities have been cloaked behind spotless facades. The truth — of course — is a lot dirtier.

“We’ve set up a system that’s brilliant at making stuff that we can’t understand ourselves — there’s not one single person who understands the complexity of the phone by themselves so we need each other to do it. But it also created distance and alienation in a way with where things come from. And we’ve been hiding it so we don’t have to think about it.”

“People are proud of having a Fairphone,” he adds, underlining the contrasting outcome of an ethical approach to product manufacturing. “You see more and more Millennials wanting to work for companies that have a purpose, and they also want to have products that contribute not only to private interests.”

Demystifying electronics extends to the Fairphone’s own internals — as you’d hope. Not only can you remove the Fairphone 2’s case to get at and replace the battery — a standard feature of smartphones in years gone past, traded in in favor of ever thinner, growing-colder-to-the-touch hermetically sealed slabs — but with the help of a small screwdriver you also can get stuck in and unscrew all the pieces: display module, camera module, top and bottom chins, and the core…

Almost all the handset’s electronic bits are replaceable, with spare parts sold via Fairphone’s website — although the core chipset is not offered as a spare part, given it’s the most expensive component and repair costs would likely put off any buyers. Nor can it be upgraded for a faster processor, as it’s the anchoring electronic architecture that the device is certified against.

But the rest of the components have been modularized so they can be replaced when broken and more easily recycled at end of life. Some modules can also be replaced to be upgraded — in order to extend the hardware lifespan with improved capabilities. At MWC Fairphone announced it has new front and rear camera modules incoming soon, for example.

They also announced that support for Android 6 would be arriving in the “coming weeks” — because of course software upgradability is equally as important for ensuring gadget longevity.

For those wanting another mobile OS flavor there’s also a community port of Ubuntu (pictured running on Fairphone hardware below) and of Jolla’s Sailfish OS. And you can also load an open source version of Android stripped of “all the Google stuff”, as van Abel puts it. 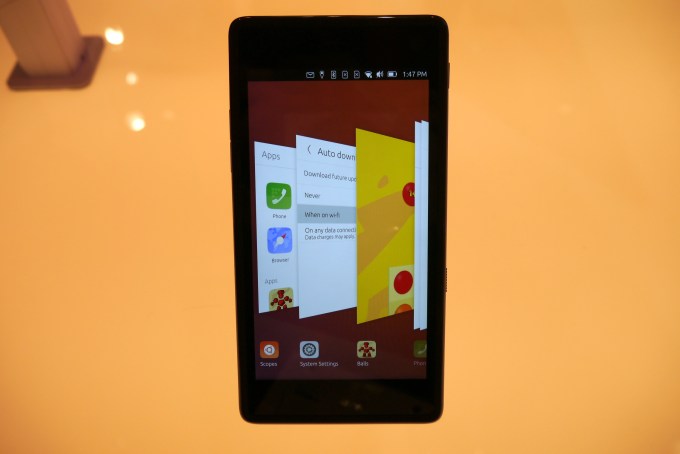 The Amsterdam-based startup has been thinking differently about the world’s favorite gadget since 2010. Initially as a campaign and then a crowdfunder with the idea of building a fairer phone like people buy fairtrade coffee or chocolate, yet lacking any direct experience of making phones. But with backers’ money in the bank they started hiring — going on to successfully turn a little goodwill into a debut handset and a nascent community.

The first device focused on ethically sourced minerals and fairer labour practices for factory workers. The second also introduced a design that’s both rugged and repairable via bespoke modularity.

“When we went to the operators at first I had a stone in my hand – I took it from a mine. And I put it on the table at KPN – one of the biggest operators in Holland — and I said guys this is going to be a Fairphone. Because it’s from a mine where there’s no conflict,” explains van Abel, pulling the very same green-streaked stone out of his bag and resting it on the table next to the pieces of its higher tech cousin.

“But the great thing is they started communicating that — we were a campaign at that time – but the fact that this big company started buying this made it very real for consumers. And then when we started selling it, we had three weeks when we sold over 10,000 phones, we had €3.5M in the bank account and we didn’t know how to make phones. And that’s how we lifted off!”

Fairphone has sold around 125,000 devices in total, selling more of the second handset than the first. And it’s preparing to scale up. van Abel says he’s fundraising and seeking strategic partners to support the next growth phase.

Early support for the business came in the form of a little working capital (£15,000) from London-based accelerator Bethnal Green Ventures, which backs social enterprise startups. But most of the financing to sustain Fairphone so far has come via a crowdfunding route.

“If you’re a company like us where you have a social enterprise model you don’t want to get venture capital on board too fast. Because they still are in the model of growth and financial returns,” says van Abel.

“I would say we’re past the startup phase and we’re really scaling the company. We’ve got 70 people already, we’ve got a turnover of around €20M to €30M, we’re going towards break even and profitable this year. So it’s a real company.”

Strategic partnerships are of especial importance for surviving in a commoditized hardware space — enabling Fairphone to benefit from economies of scale that larger partners can command, such as by being able to tack its (modest) component orders onto much larger ones. And that need for help from the wider mobile ecosystem isn’t going to go away.

“We’ve got some really great things coming up with big operators, big distributors, who are also going to help up, going to support us on scaling the company. And have that leverage in the industry to work with the factories on a more healthy, [sustainable] base. So that’s really strengthening the business.”

He describes carriers as an interesting partner combination given how their commercial goals can align with its mission — with carriers seeking loyalty and Fairphone encouraging phone users to stick not twist their hardware.

He says one possible scenario could be a carrier partner offering a Fairphone user more data or lower monthly costs in exchange for keeping their device for longer. “Loyalty is their business,” he says. “So they can play around with that, and for us it’s great because it incentivizes people to keep their phone for longer through a financial incentive as well.”

And while many investors would pass by what van Abel cheerfully describes as a “niche” business for now, he’s confident a bigger shift is coming down the pipe as the concept of fairer electronics gains momentum — pointing, for example, to how other startups are following in Fairphone’s footsteps.

Even if, as I point out, a giant like Google apparently couldn’t make modularity stick. Why does he think that Google’s Project Ara failed to bring smartphone modularity to market? “It was more about customizable phones,” he suggests. “I don’t see a reason why people want to put their own phone together. And because of that, customization with modularity, it became really challenging from a technological point of view.

“I haven’t found a phone company that actually said that their mission is to sell less phones to a single person,” he adds. “That’s the thing, you don’t change these things over night — so you can better do that as a niche product. We’re a niche, we don’t have to become bigger than a couple of hundred thousand phones a year to survive.”

Germany is Fairphone’s best market so far, according to van Abel. And when I ask who the typical user is the answer is instant and specific: “A 36-year-old male German with a university Masters degree.” But he’s also confident that green-hued Gen-X Germans are just the early adopting vanguard — the tip of the ethical electronic iceberg.

As chance would have it, as I’m writing this article I realize that one of my trusty Sennheiser earbuds has finally gone dark — some four years after I bought the pair. Sadly there’s zero chance of prising apart its tiny pieces and swapping out whatever component has failed. But I really wish there were.