Layer, the messaging platform that won TechCrunch’s Startup Battlefield back in 2013, is making two big announcements today: It’s raised $15 million in Series B funding, and it’s acquiring another startup, Cola.

Layer makes it easy for businesses to add messaging capabilities to their iOS, Android and web products — customers include Trunk Club, Staples and Udacity. In fact, the company recently partnered with Microsoft to provide messaging in the official app at the World Economic Forum in Davos, with capabilities for instant translation.

Cola, meanwhile, launched a text messaging app last year with interactive capabilities like calendar- and location-sharing, polling and shared to-do lists. (You can see examples in the screenshot below.) Layer CEO Ron Palmeri told me that Cola’s technology was a good fit for the Layer platform, since Cola’s “Bubbles” could help streamline a customer’s interactions with a business. 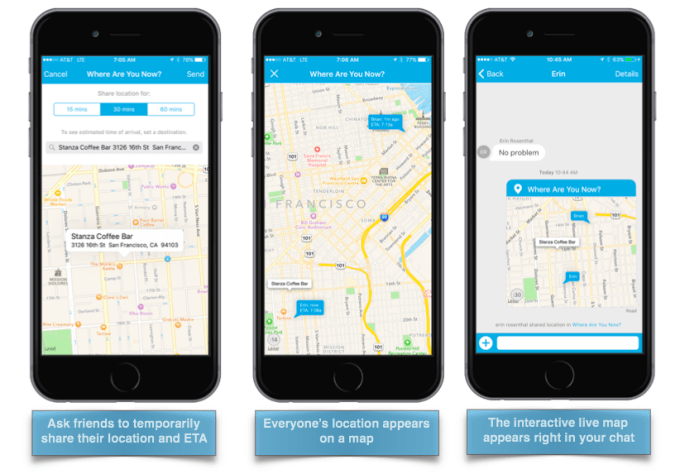 “If you have to file an insurance claim, or start a mortgage process, these things require many, many steps and takes days or weeks,” Palmeri said — so imagine staying connected throughout all of that with messaging and Cola Bubbles that update to tell you where you are in the process.

So Layer is acquiring Cola to integrate those capabilities into its broader platform — the Cola technical team, led by CTO Jeremy Wyld, will be working at Layer to build these integrations. (The rest of Cola, including CEO David Temkin, won’t be joining.) Ultimately, Palmeri said he wants to bring Cola functionality “across web and mobile, tying into things like email and SMS channels.”

The financial terms of the deal were not disclosed. Cola had raised $1.3 million in seed funding from investors including Brad Garlinghouse, Steve Case, Naval Ravikant and Tribeca Angels.

And while the team will no longer focus on developing the Cola app, Palmeri said there are no plans to shut the app down.

As for Layer’s new funding, it was led by Greycroft Partners, with participation from Microsoft Ventures, Salesforce Ventures and others. Palmeri said Layer will be focused building more integrations, continuing to improve its open source user interface frameworks and developing technology in areas like artificial intelligence and machine learning.

The startup has now raised a total of  $30 million.