With the rise of algorithmic stock trading it’s gotten harder and harder for humans to actually trade strategically. However, now that Trump’s chaotic twitter feed can make or break a company with a single mention, you can easily trade against positive or negative sentiment and make a little money in the process!

An app, called Trump2Cash, is partially tongue in cheek but quite interesting. It’s a bot written in Python that watches Trumps feed and does a sentiment analysis on any Tweet mentioning a public company. Is Trump saying NO WAY to Toyota? Short some stock! Is Ford bringing 700 jobs from Mexico because it believes in America (not really)? Buy buy buy!

Programmer Max Braun created the app as a test and it’s currently making recommendations on Twitter about whether to buy or sell. He writes:

 Check out the benchmark report. It’s essentially a test run that shows you how the algorithm performs on past tweets and market data. You’ll see that it sometimes misses a company or gets a sentiment wrong, but it also gets it right a lot. The trading strategy sometimes leaves you up and sometimes down.

Overall, the algorithm seems to succeed more often than not: The simulated fund has an annualized return of about 59% since inception. There are limits to the simulation and the underlying data, so take it all with a grain of salt. 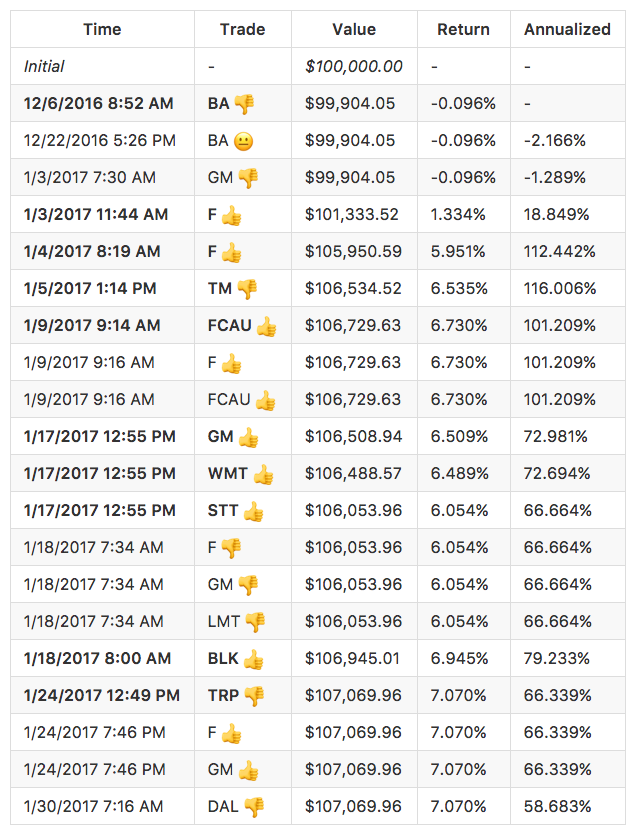 You can download the app here and run it yourself if you’re so inclined or you can simply sit back and watch it go to town, algorithmically trading based on Trump mentions. Like Glass Joe telegraphing his weak points in Mike Tyson’s Punch Out this bots lets our new Businessman-in-Chief lead your portfolio to riches.