Driving the Chevrolet Bolt is a bit anticlimactic at first; it feels a lot like driving an ordinary car initially, albeit one with more pick-up than the average compact four-door can offer. It’s still fun, but the real fun starts when you fully embrace the car’s electric side.

The Bolt is designed to be approachable and at least a little familiar at first, even though it’s actually a very different kind of car under the hood, thanks to its 60 kWh battery and electric motor. Chevrolet knows that a lot of its owners will be first-time EV buyers, and that there’s a learning curve when you’re coming from a long history of driving gas-powered cars.

Bolt is intended to say “Hi” in a way the average driver can understand, but if you make a little effort and look deeper into what makes this purely electric vehicle with class-leading range unique, you’ll definitely be rewarded.

I got to drive the Bolt EV at an event set up by Chevrolet in Palo Alto, hosted in part at the beautiful, modern abode of one of the Bolt’s first buyers, and also across a broad stretch of Northern California’s most appealing roadways, including snaking, narrow roadways with the Bolt handled with ease, even in unusually wet weather. The ride also included the Pacific Ocean-skirting 1, a highway so scenic it’s almost a shame to drive it fast.

The Bolt isn’t exactly a speed demon itself – but it’s no slouch, either. Its 6.2-second 0 to 60 mph time won’t win it a place atop the list of the world’s fastest production vehicles, unlike some other EVs. But it feels fast, and fun – both in its basic drive mode, and with the Sport feature engaged, which gives you a very noticeable boost when it comes to pick-up, but taxes your battery reserves quicker as a trade-off. 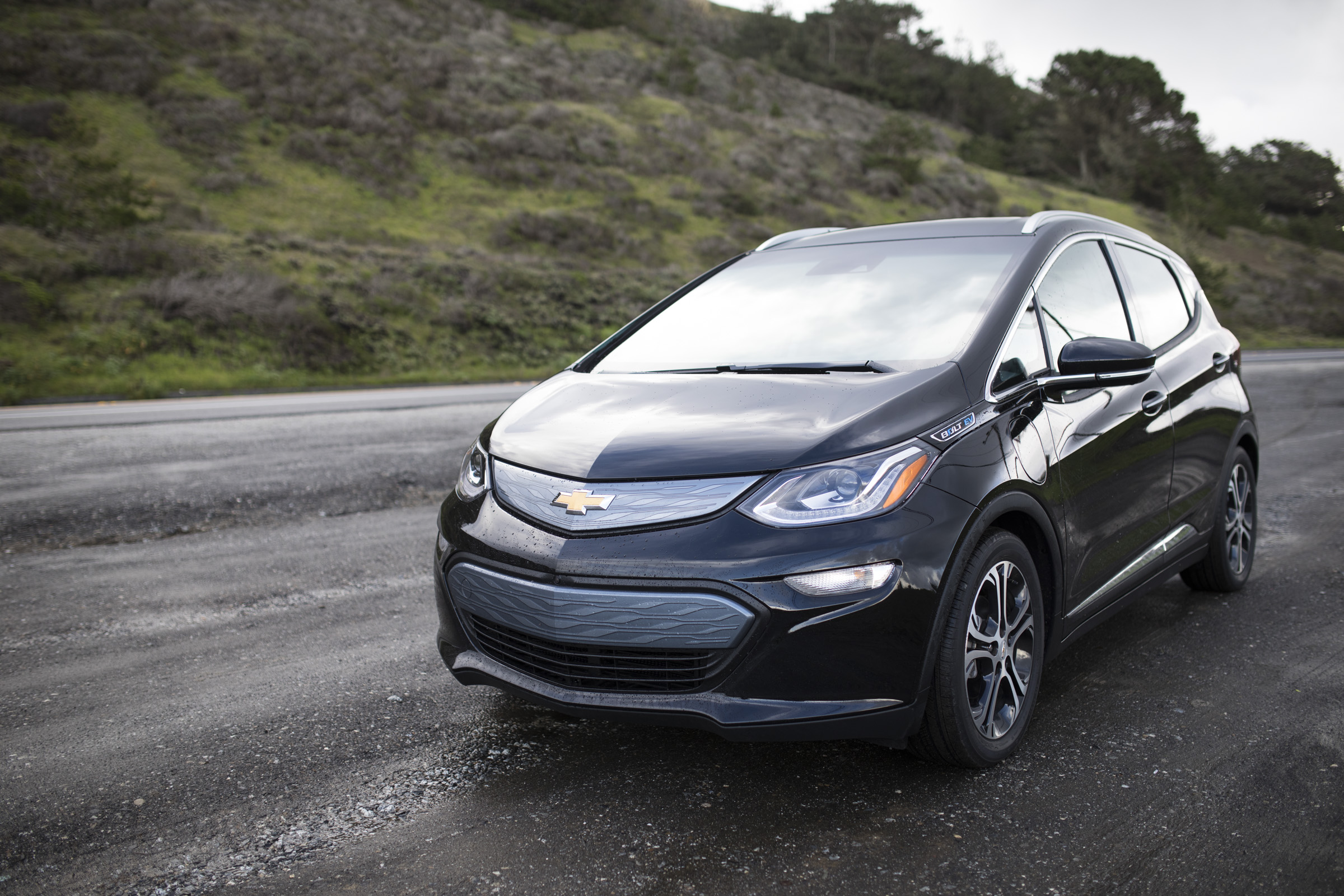 No, in general the Bolt doesn’t feel like a sports car, but it isn’t one; it’s a spacious, small vehicle perfectly at home in urban driving conditions, with comfortable space for a family of four and convertible storage that offers a lot of room for bags, particularly if you’re using the fold-flat back seats in their closed position. You could reasonably get checked backs for a family of three in the back with a tight fit, for instance, or a week’s worth of camping provisions for a duo using the full fold-flat storage space.

Bolt does feel like is a family car with some fire, however, and a fun quotient that deepens if, as I hinted above, you venture out of the car’s default drive mode and take advantage of some of the unique features it can offer specifically because it is an EV.

In Drive, which you enter by simply pushing the new electronic shift down, the car feels very similar to whatever fossil fuel-based ride you might be used to; It accelerates when you hit the now-inappropriately named ’gas’ pedal, and coasts when you remove it, decelerating slowly and smoothly. Tap that electronic shift down once more, however, and you enter ‘Low’ mode, which is where the Bolt’s regenerative breaking swtiches on by default – and where the car’s character really starts to shine through. 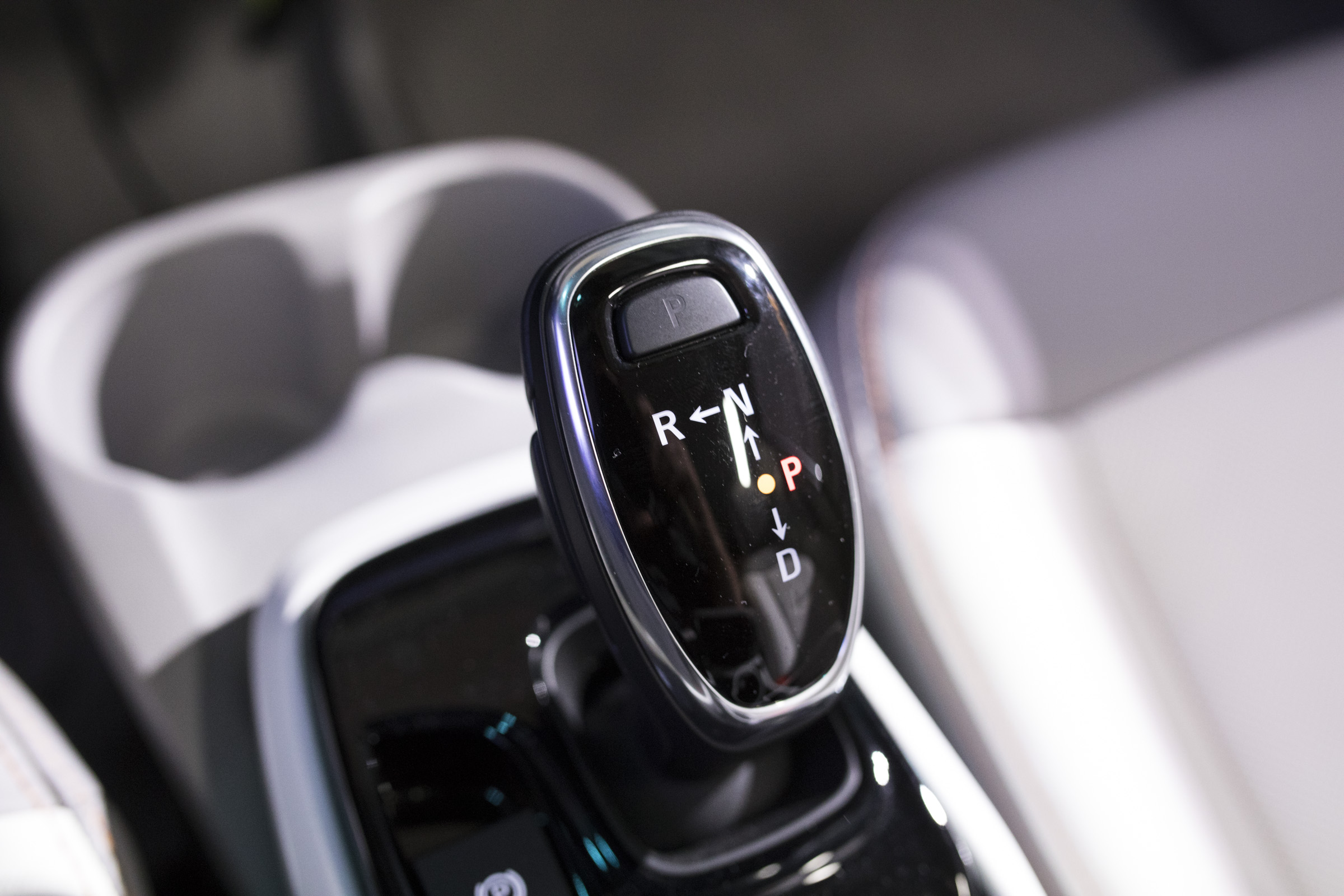 If you haven’t used a car with regenerative breaking before, it’s going to take some getting used to; effectively the car is not “braking” in the traditional sense. Instead, it’s offering resistance via the motor, and using your momentum to push against that resistance and harvesting the resulting collected power to put back into that battery, recouping charge.

Using regenerative braking, you don’t actually need to use the brake pedal all that much, depending on how good you are at predicting when you need to stop and timing your deceleration. Removing your foot from the accelerator will result in what feels like a fairly aggressive – though not sudden – brake, and you can use this technique to coast to stops at intersections accurately and easily with a little practice.

We got plenty of time to test the regen braking features, which also include a way to do this using a steering wheel-mounted paddle, which you can employ either in Low mode to accelerate the rate of deceleration (yep, that is really what I mean) or in the regular Drive mode, to manually trigger it even when it’s not otherwise engaged. I liked both methods, but eventually it started to feel like driving in “Low” was the true default. 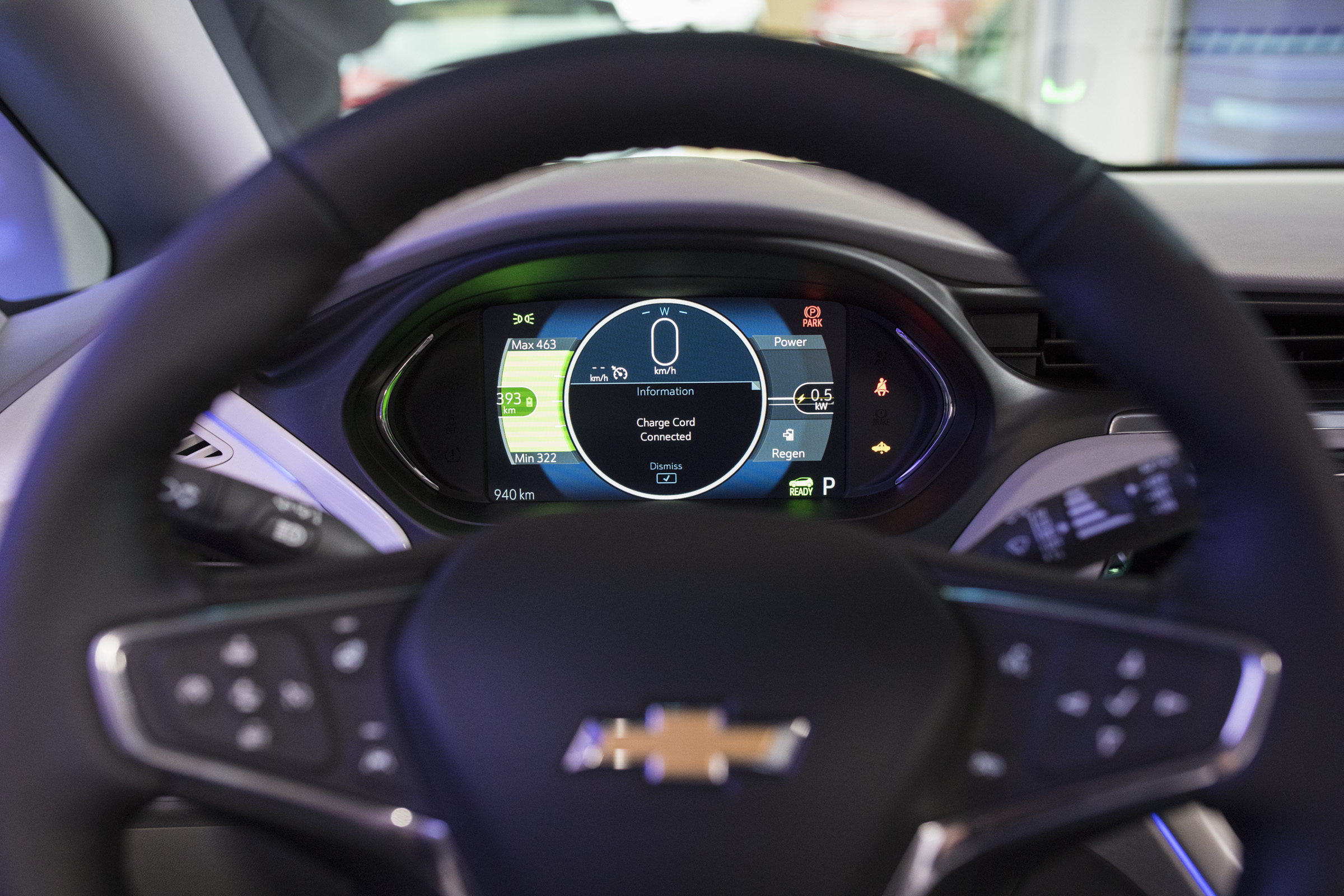 Regen braking actually adds an element of fun to the driving experience that’s completely unavailable when you’re driving a gas-powered car: it gamifies driving as you try to master the ability to drive without touching the brake, and it encourages you to try to drive with maximum efficiency, getting back every mile you possibly can with the most effective use of regenerative braking you can manage.

Reading that back, I’m not sure if it sounds fun, but in practice, it is. And using the paddle adds a tactile control element that’s extremely satisfying to this driver. Realistically, a Chevrolet engineer tells me that you’re probably going to only get as much as 5 percent of your charge back via regenerative breaking, which translates to just under 12 miles – not really enough to make a huge difference, but still something – and the real point is the fun you have trying to recoup that power, anyway.

Once you go ‘Low,’ you’re going to stay there.

What’s amazing about all of this is that Chevrolet went out of their way to engineer an experience that hides this completely; the default Drive mode, with its more “natural” driving feel compared to traditional cars, is actually a fully software-driven artifice made to bridge the gap for novice EV drivers. It’s a nice touch, but take it from me: Once you go ‘Low,’ you’re going to stay there.

In terms of creature comforts, the Bolt is also a strong vehicle, especially given how Chevrolet has decided to outfit even the base model trim. There’s a 10.2-inch capacitive touchscreen display standard, for instance, as well as support for both Android Auto and Apple Maps out of the box. These options effectively replace on-board navigation – Chevrolet says it didn’t think that’s necessary anymore now that virtually all drivers are walking around with the world’s greatest mapping services in their pockets, and I agree wholeheartedly. 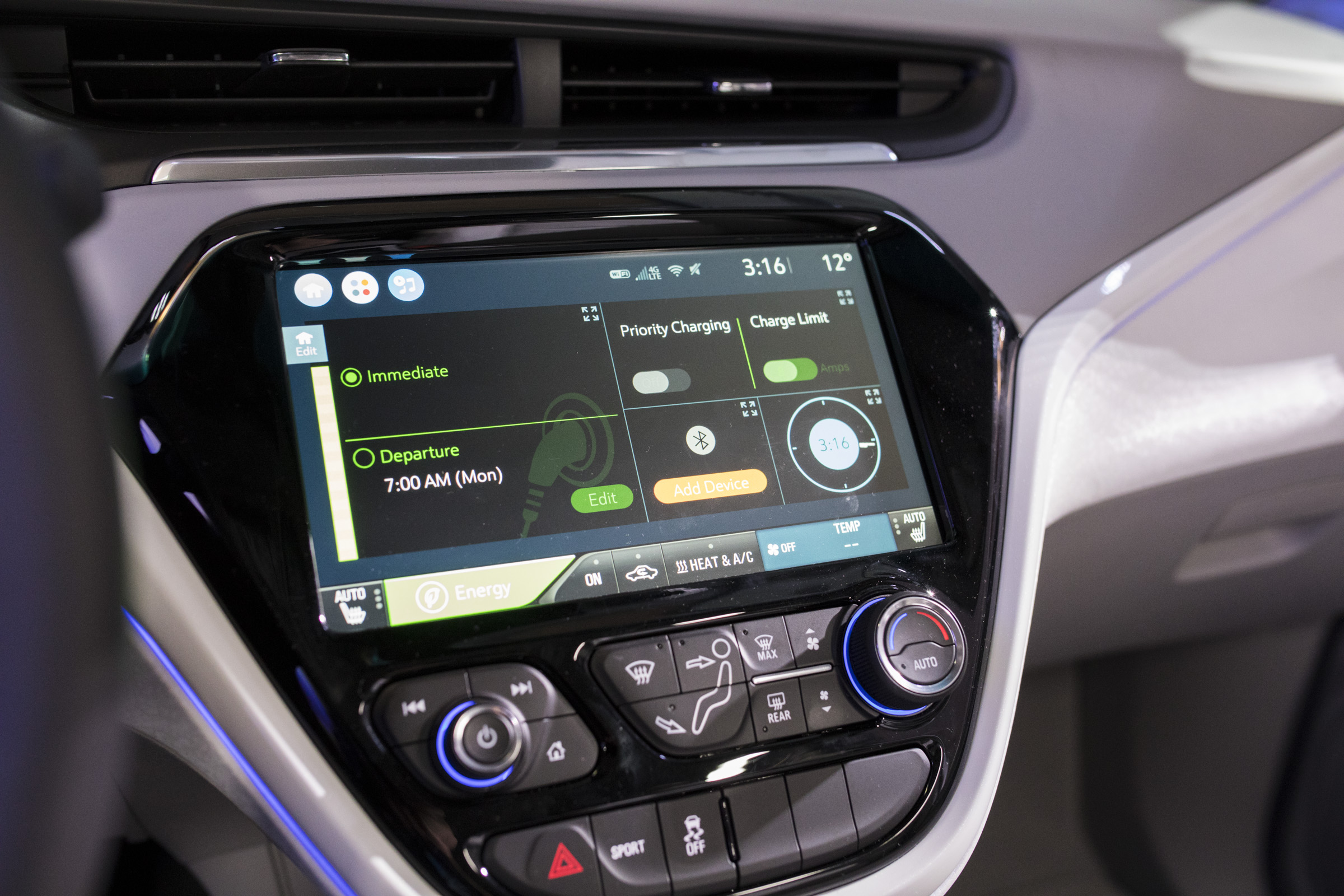 And while I’d still recommend either Android Auto or CarPlay as your primary infotainment interface, the native Chevy interface actually isn’t that bad, with a number of preset options included “Family” to choose from with different individual layout pieces, like media and quick access contacts. These can be customized, but if anything I found them a bit overwhelming and busy in their range of offerings and visual presentation. But plug in your phone and that big, beautiful touchscreen is put to great use, regardless.

The digital instrument panel is much better, with three different available settings based on your comfort level with the technology powering your car. An advanced mode, the one I liked best, offers a view of your remaining range, including both a high and low estimate, established based on your recent driving history and lifetime driving habits. This is super useful, especially if you’re new to EVs, because range anxiety is still a thing even with 238 miles of travel in a full charge, and a number of factors can lead to significant changes in how many miles you’ll actually get out of that capacity even trip-to-trip.

Chevrolet’s system is informative without being overwhelming, and will give you a guess of your real-world range that allows you to plan trips more accurately. It could still use input from other signals, including weather and road conditions, but it’s doing a lot with the intelligence available in terms of adjusting estimates on the fly.

Other aspects of the interior are equally well-designed. The trim accent with a pixel-like finish is attractive, and while it’s white, the car’s designers assured me it cleans easily and won’t be quick to pick up dirt. The car is also designed to maximize interior space, and it shows – even though it’s physically a small car, it feels a lot bigger on the inside, and I was able to fit my 6’2”, 200 lb frame in the cockpit easily and comfortably, whereas I normally feel cramped in similarly sized vehicles, including the Nissan Juke.

In the end, the Bolt is the first EV that feels like a practical option I could actually see myself owning. The price is right, and it’s fun to drive, with a decent amount of cargo space and enough range to visit the family’s lake house without having to stop to recharge. Real-world range testing will have to wait for a longer review, but driving California’s highways and San Francisco’s city streets was thoroughly enjoyable in the Bolt, making it an easy choice to recommend based on first impressions.