Hanson Robotics is making its first foray into the consumer electronics market with an educational toy called Professor Einstein. The device is a pint-sized, shuffling Albert Einstein that uses natural language processing, and other artificial intelligence capabilities, to comprehend and answer kids’ questions about science.

The Einstein toy robot works as a standalone or in conjunction with the company’s Stein-o-Matic app which delivers new, interactive content, daily. Its face emotes, its hand and arm can point, but this is not the kind of robot that will vacuum floors or do any lifting. The 14.5-inch tall device is wifi enabled, compatible with both iOS and Android phones or tablets, and powered by rechargeable nickel metal hydride batteries.

Early backers can pre-order Professor Einstein via Kickstarter as of this morning for $249. The company plans to ship the toy in April, and confirmed that Professor Einstein is already designed for manufacturing, not in some non-existent prototyping stage likely to lead to a crowdfunding disappointment. Hanson Robotics built original content and a speech processing system for its Professor Einstein but taps into AI systems like IBM Watson and Microsoft’s Xiaobing chatbot as well to enable conversation.

While Hanson Robotics has been known for its research and development building robots with empathy, everyday citizens haven’t been able to purchase the company’s technology before this. Among other things, Hanson Robotics has invented a skin-like material called “frubber,” as well as motors and systems that imitate all the major facial movements and expressions of a human, and can be run on low power systems. 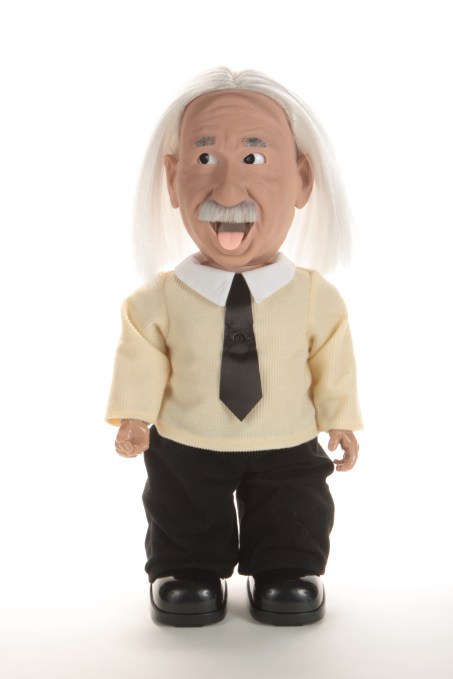 The inventor of the Professor Einstein toy, Andy Rifkin, who is now CTO of Hanson Robotics in Hong Kong, previously worked at Time Warner, Mattel, Disney and United Internet Technologies. Throughout his career, he has invented toys that will be familiar to those who grew up in the 90s and Y2Ks, like the musical instrument controllers for the Rock Band video game franchise, Barbie Digital Cameras and PhotoDesign software, and the IntelPlay QX3 digital, USB-connected microscope to name a few.

Hanson Robotics expects Professor Einstein users will be thirteen years old and up. But why would teens need a robot, and not just a solid app (or for that matter just some good books) to learn science?

Rikin said, “Expressive faces make people more open to learning, questioning and thinking.” The CTO pointed TechCrunch in the direction of a Yale study that concluded people experience “cognitive gains,” i.e. we learn better, when a robot is physically present giving them personalized help, compared to when they study on their own, with a tutor appearing on just a screen or with an audio-only tutor. Findings like this are only one reason why the company’s core focus is on “character robots,” across the board.

If Professor Einstein succeeds, the toy will be another step in the evolution of educational, robotic toys going back from the fairly recent Big Hugs Elmo interactive doll by Hasbro Playskool Sesame Street, to Mego Corporation and Tiger Corporation’s 2XL line of robots, popular in the 80s.