If you’re old enough to remember the Concorde, then startup Boom‘s plans to bring supersonic flight back to commercial passenger air travel is huge. Now Boom is one step closer, as it reveals the XB-1 Supersonic Demonstrator, a 1/3-scale prototype of its Boom supersonic passenger aircraft, which will be doing its first supersonic test flights later this year.

The scale demonstration craft is meant to be “technically representative” of what the final airliner will offer, and includes GE engines, Honeywell avionics and Tencate structural carbon fiber elements. Partner Virgin Galactic is going to be helping Boom build its first production aircraft, offering engineering and manufacturing as well as testing and operations support. Virgin also has optioned Boom’s first 10 vehicles, so it’s also the startup’s first customer.

Testing of the XB-1 will begin with subsonic flights at a location east of Denver in Colorado, and then supersonic tests will run near Edwards Air Force Base in Southern California. Test flights for cutting-edge aircraft, including the F-35, are conducted regularly at the Edwards facility.

Boom has ex-NASA, ex-Lockheed and ex-Boeing aircraft engineers on its team, along with funding from Lightbank, Y Combinator and Sam Altman, Paul Graham and Kyle Voght of Cruise. Their aim is not only to bring back commercial supersonic passenger flight, but also to make it affordable enough that it’s a viable option for regular passengers and routes. 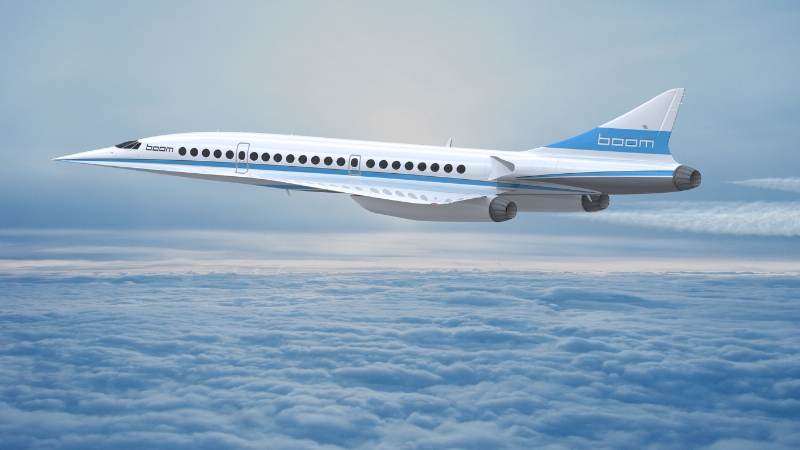 The Concorde, a supersonic jet debuted in 1969, flew for 27 years from 1976 through 2003, achieving travel times that were half what’s possible with conventional jets. It was retired after a disastrous crash of one of its planes in 2000, which led to low ticket sales exacerbated by a downturn in air travel in general following 9/11.

Richard Branson wanted to purchase a Concorde fleet from British Airways, and tried a number of increasing bids to do so, but was ultimately rejected. That helps explain Virgin Galactic’s enthusiastic support of Boom, both in testing and as its initial customer.

As for specs, the XB-1 craft is the first supersonic jet that can claim a totally independent and private development process, and it’s also going to be the fastest civilian aircraft in operation if it meets its targets, with a 1,451 mph cruising speed that tops the Concorde’s max by 10 percent. Boom also claims a better interior experience, with just one seat per side of the aisle and a smoother ride due to the higher, 60,000-foot cruising altitude.

Boom’s XB-1 Supersonic Demonstrator will target the same max speed as the eventual full-size passenger airliner, but will only carry a pilot and an optional test engineer or other passenger, while the final vehicle will have a passenger capacity of 45 in addition to the crew and 4 flight attendants, with an optional high-density configuration that would allow an additional 10 passengers on board.