After news broke that YPlan had been acquired by Time Out Group for significantly less than the approximately £31 million that the London startup had raised, you’d be forgiven for thinking there would be little appetite for a new events discovery and booking platform.

However, that isn’t stopping Revl, an events marketplace app for iOS that is leaving stealth mode today. The startup is also disclosing £2.4 million in Seed funding.

Investors are undisclosed, although I understand them to be individuals in the events sector, some of whom previously backed Tortilla, and friends of the founders.

Revl wants to match supply with demand, helping you to discover more events, shows and performers, whilst giving its more than 600 brand partners in the U.K. a platform to ‘broadcast’ their offerings. At launch the latter includes The O2, Wembley Stadium, British Museum, Natural History Museum, National Gallery, and the V&A, along with 17 ticketing partners. 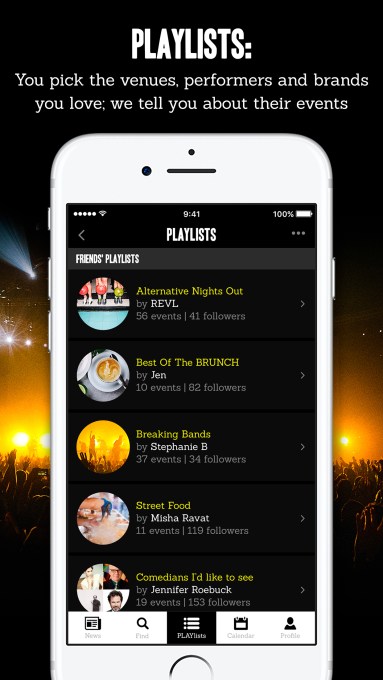 The longer term plan is to build up an inventory that can drill down to your local pub or bar, or any venue, independent or major, where there is an event of interest.

“We’re making it super easy for people to find out what’s going on at any venue in the U.K. and to see when their favourite musicians, comedians or sports teams are performing,” Stephens tells me.

“We’re pioneering the use of playlists for events – so you can create a playlist of your favourite pubs, clubs, theatres, museums, bands or whatever your interest is across 19 interest areas, and we’ll tell you all of the events that are taking place”.

In addition, the app lets you follow others’ playlists, such as those created by your friends, bloggers, or leading brands. Think of something like the ability to subscribe to lists in the original Foursquare app or music playlists in something like Spotify, but for events.

“So let’s say you’re into Jazz but don’t know the venues. Follow someone’s jazz playlist and you’ll find out about all of the jazz events in London,” explains Stephens. “Plus we provide breaking news about events that have just been announced as well as tickets that have just gone on sale for all of your favourite venues and performers. And because we’ve partnered with 17 of the UK’s leading ticket providers, we can show you a comprehensive set of ticket options for each gig”.

The result, says Revl’s co-founder and CEO, is that, even at launch, the startup has tried to cover every use case and be as comprehensive in terms of functionality and content as possible. “And we’re just getting going,” he adds.

To that end, the app already houses over 130,000 events, covering more than 40,000 venues. That feels like a decent start even under the shadow of YPlan’s much-maligned exit.