A startup called Waggle raised $2.3 million in seed funding to become the go-to destination for animal lovers and pet parents online, and for sharing all the cute pups and madcap kitteh adventures they have to offer.

The New York City-based startup was incubated at Broadway Video Ventures, the venture arm of the production company behind premium comedy shows like 30 Rock, Portlandia and Saturday Night Live, among others.

Co-founder and CEO Matt Cavnar said, “There was nothing out there community-driven around pets and animals. We think the bond people have with their pets, and people’s love of animals is a strong emotional one. Yet nobody was celebrating and promoting that.”

To get its programming, Waggle collects user-generated pet content from users of its mobile app and website.

It sifts out the gems from contributors, edits and adds a bit of production gloss to certain clips or images, then syndicates these as new media programming to the Waggle audience via multiple formats including an e-mail newsletter, website, mobile app, and Facebook account.

Among other gags, one of Waggle’s quirky e-mail newsletters is written humorously from the point of view of animals. And the startup regularly live streams shows via Facebook that feature French bulldogs disco dancing, for example, or a parrot cooking. 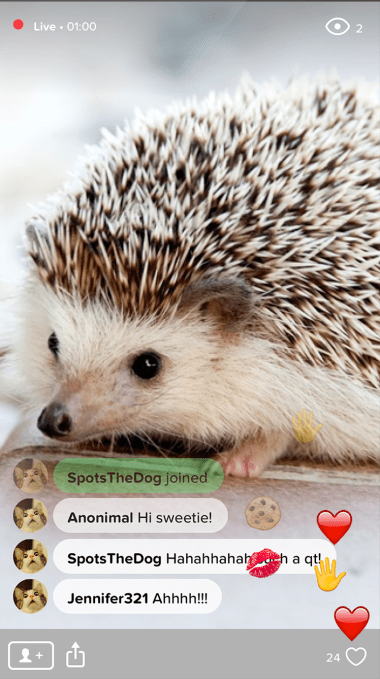 Users of the Waggle app express their love of baby hedgehogs.

On Facebook, Waggle has already aired at least 1,000 hours of live streaming pet videos, and garnered more than 10 million views since its beta period began in September, Cavnar noted.

Eventually the startup hopes to help turn pets and their owners into micro- and mega-influencers online who can generate income from product placements, or content they provide to Waggle, or publish on their own, for example via an individual Instagram account.

Waggle has 8 full-time employees now with half in San Francisco. It intends to use its capital for hiring, community and content development.

Raine was an early backer of digital media startups including Tastemade, Mobcrush, Maker Media, and Life on Air which created the influential but now defunct Meerkat live streaming app.