Rick Schwartz has produced some great, successful movies, including The Departed, Black Swan and Gangs of New York. But with Jerrick Media Holdings (founded with former Wall Street executive Jeremy Frommer), he’s shifting his focus to the online world.

Schwartz explained the move by saying he’d “noticed that it was harder and harder to get people to go into theaters for movies that weren’t IP-based.” So he started to produce shorter content, first for TV (he’s an executive producer on Lip Sync Battle) and now for digital media.

Jerrick kicked off its online strategy by acquiring the assets of Bob Guccione (that’s right, the founder of Penthouse) and relaunching Omni, Guccione’s affectionately remembered science and science fiction magazine from the ’80s and ’90s. Now the company runs five sites in addition to Omni (Geeks, Longevity, Journal, Filthy and Potent) and today, it’s launching Vocal, a platform for contributing to those sites.

The goal, Schwartz said, is to provide “a more democratic way of looking at publishing,” where any member of the community could potentially contribute their opinions and expertise without having to go through a complicated pitching and editorial process.

“We started by bringing back old media titles like Omni and repurposing them for a new digital generation,” Schwartz said. “It gave us wonderful content to help build the verticals, and [it] inspired many people to submit their own pieces — fiction, articles on planets, sci-fi, etc. — which is how we got to the idea of Vocal.”

Moving forward, Schwartz said Jerrick will still have staff members who curate and create content for the sites, but he expects “the bulk of the content” to come from “voices for each community.”

“We’re here to maintain the quality and ensure it’s on-topic, then get out of the way,” he added. 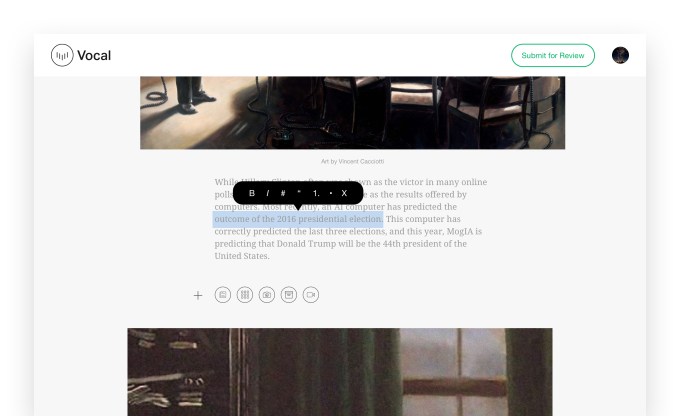 Schwartz and Justin Maury (Jerrick’s head of product, creative and design)   gave me a quick demo of the new platform. At the start, it looks like a straightforward blogging tool — I’m betting anyone interested in writing a post should be able to use it without any trouble or confusion.

And even as you’re writing, Vocal provides guidance on how to make sure the post is optimized for search engines. I was a bit surprised at that, since most big online publications (including TechCrunch) are spending their time on social media distribution, but Schwartz and Maury argued that SEO provides a more reliable long-term source of traffic and revenue — which is probably why Jerrick emphasizes “evergreen” content over breaking news.

After you submit a post, it’s reviewed by the Jerrick team. Schwartz said this isn’t like a normal submission process — it’s more about screening for things like plagiarism and obscenity, and making sure posts are on-topic for the site. Once a post is approved, it goes live on the site in question and is promoted across the Jerrick network.

You can even make money from your post. Maury explained that the platform calculates a CPM (price per thousand impressions) based on the engagement on a post, then pays the writer accordingly. No, you probably won’t make a lot of money, but Schwartz said, “If you do have a piece that a lot of people read, you don’t feel like a schmuck because you’re not monetizing the thing. It’s not like you’re getting rich.”

Jerrick, meanwhile, is making money from sponsored content, with plans to roll out a self-serve native ad platform for contributors next year.